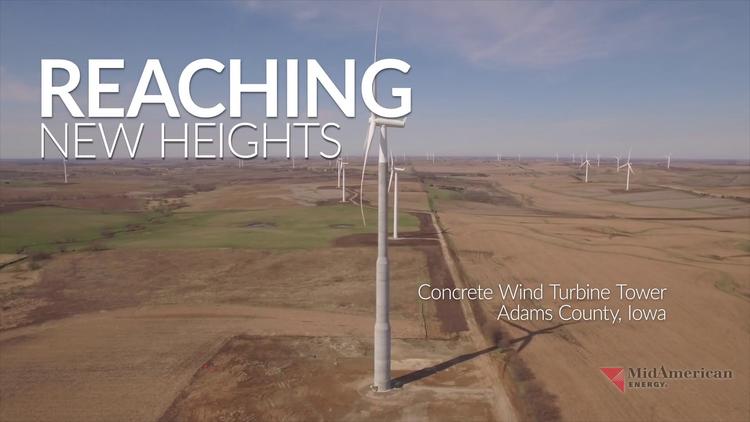 Iowa gets 31% of its electricity from wind turbines, the highest percentage in the nation (though Texas generates more than twice as many megawatts from wind). But you ain’t seen nuthin’ yet. Some Iowa planners think that in only 14 years Iowa will be able to power its entire grid with wind and have some electrical generation capacity to spare, enabling it to supply other states, as well.

Trump has notoriously pronounced that the wind turbines kill all the birds. Actually as the turbines have gotten taller it has been found that the birds typically fly under them. But if Trump is so concerned about the birds, maybe he should take on the mighty house cat instead. According to the Nature Conservancy, house cats polish off 2.4 billion birds annually. Wind turbines? Only 500k a year, according to the U.S. Fish and Wildlife Service.

In a sign of how serious these Iowa plans are, Emily J. Gertz reports that , two Iowa utilities are putting, all told, $4.6 billion into the addition of 2,500 megawatts of new wind energy in Iowa by 2020.

The utility Alliant Energy says it will invest $1 billion in adding a new 500 megawatts of generation in the northern part of Iowa to its 200-megawatt Whispering Willow Wind Farm.

At the same time, MidAmerican Energy has all its ducks in a row now for building a new, 2,000 megawatt “Wind X” facility for $3.6 bn.

Iowa presently generates 6,365 megawatts via wind turbines, nearly 10% of the entire US generating capacity in this sector even though it is a relatively small state with a population of 3.1 million (1% of the national population).

Another 5,800 megawatts of wind-powered electricity generation is even now being planned in Iowa.

As for the US, nationally some 18 gigawatts (GW) (18,000 megawatts) of new wind facilities have been begun or are on the verge of being started up– enough to power 5 million homes.

There are 117 million US households so that is 4.3%. Do that about 25 times over and we’re done (much less, in fact, since many are apartments).

Although the wind does not blow all the time, non-carbon solutions to this problem are increasingly available. Solar energy turns out to complement wind, since typically the wind blows harder and more reliably at night. Molten salt batteries are also successful with concentrated solar.

Midwestern lithium-ion battery storage projects are beginning to be planned, as at Indianapolis, to smooth out wind’s intermittency.

Some other new wind projects elsewhere, like the offshore facility planned for off Long Island, are building in increasingly powerful and inexpensive battery storage so as to be able to release the electricity at peak use times rather than just when the wind is strongest.

Electric-powered automobiles– the Tesla, Volt, Bolt, Leaf and others– are also in essence a form of storage.

Since fuel is free and you just have installation costs, wind projects can lock in a 25-year price, unlike hydrocarbons. Plus, even 80% of conservatives think well of wind power, so companies like Target are turning to it both because of its reliable cheapness and for a PR boost.

Wind turbines are spread out and hard to target en masse, unlike gas, coal and nuclear plants, so they add to national security. And unlike nuclear, they pose no danger of a meltdown.