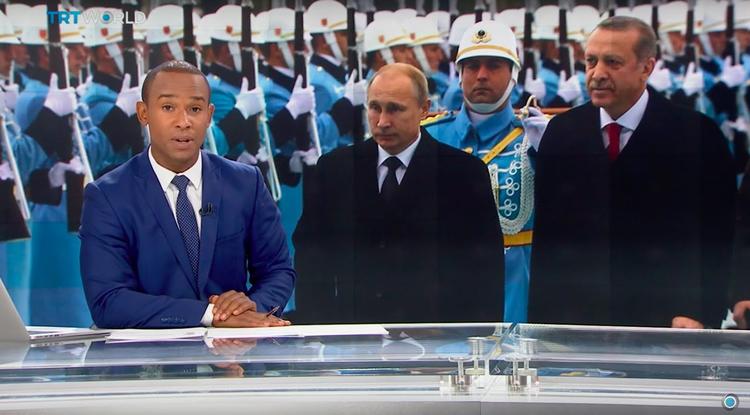 Turkish President Recep Tayyip Erdogan travels to St. Petersburg on August 9 to meet with Russian President Vladimir Putin. They will focus on improving cooperation in two main areas: the effort to find a shared and joint solution to the Syria crisis, and in business and energy, including a full resumption of tourism from Russia to Turkey, trade, and construction projects that were halted during a monthslong spat between the two nations.

Both sides, it appears, are using the recent Turkish coup attempt to mend their relations.

This is Erdogan’s first visit to a foreign country since the July 15 effort to overthrow his government. The coup attempt was rebuffed by a majority of Turks and clamped down by security forces. It was followed by the detention, arrest, and dismissal of tens of thousands of people accused of being members or sympathizing with Fethullah Gulen, a Turkish preacher who has been in self-imposed exile in the United States since 1999. He is accused by the Turkish government of building a secret network infiltrating the army, the justice, education, and media sectors, and the business world.

The St. Petersburg visit will also be the first meeting between the Turkish and Russian presidents since Turkey downed a Russian attack aircraft near the Syrian-Turkish border in November. Erdogan strongly defended the action at the time, saying that the Russian aircraft — which was participating in Russia’s bombing campaign in Syria — had violated Turkish airspace.

In the Syrian conflict, Turkey started in the early 2010s to support armed rebel groups, including extremist Islamists, against the Syrian government of President Bashar al-Assad. Russia took sides with the Assad government and actively entered the war in September, 2015. This created a regional confrontation between Russia and Turkey, who had to that point enjoyed good relations.

Following the incident, relations between the two countries reached a historic low. Putin called the downing of the Russian aircraft — which led to the killing of its Russian pilot after he parachuted to the ground in Syria — a “war crime” and demanded an apology by Erdogan. Russia also initiated a number of punitive measures against Turkey — including ones preventing Russian tourists from traveling to Turkey, and a ban on Turkish food imports — that strained Turkey’s economy.

Then, in an about-face, Russia announced in June that Erdogan had sent a letter of condolence to Putin over the downing of the Russian jet and the two sides agreed to resolve their issues, find common ground in the effort to end the Syrian crisis, and improve their relations.

Formidable sticking points remain, however, particularly when it comes to Syria and the future of Assad.

Speaking about Erdogan’s upcoming visit, Ibrahim Kalin, the spokesman for the Turkish president, said that Turkey wants “to work together with Russia to find a political transition [of power] for Syria, a democratic and pluralist political structure acceptable to all Syrians.” However, he added, “such a solution, that is in the interest of both Russia and Turkey, will be not possible with Assad remaining in power.”

It seems the resumption of better economic and energy relations is already in progress. The delivery of Russian natural gas to Turkey was never interrupted in the first place, so not much ground was lost. The resumption of Russian tourism to Turkey is trickier, in part due to the deadly terrorist attack against the Istanbul airport in June as well as the recent coup — both of which badly damaged Turkish tourism during high season.

Foreign policy seems to be at the top of the upcoming Erdogan-Putin meeting. Obviously, Syria policy is to be a main part of the two leaders’ discussions. A “goodwill coordination of positions” on Syria would seem to be a potential rebuff to U.S. efforts in support of armed groups and Kurdish rebels in Syria against Assad, a scenario that would be complicated by Russia’s own support for the Kurds.

But Russia also appears to be using two issues related to the recent coup attempt to deepen the current Turkish-U.S. and generally Turkish-Western atmosphere of accusatory distrust, and bring Turkey closer to Russian foreign policy coordinates.

Meanwhile, Moscow is presenting itself to Turkey as a good “friend” who condemned the coup attempt from the beginning and offered Erdogan its full support. Russian lawmakers have claimed that the “U.S. will never extradite Gulen because the CIA was behind him and his coup attempt,” and bombastic politician Vladimir Zhirinovsky went so far as to say that “Gulen and the U.S. are Turkey’s enemies.”

Despite Erdogan’s initial defense of the downing of the Russian jet, since the coup attempt Turkey has tried to blame the incident on pilots who are alleged to have been Gulen sympathizers. Even more, just on the eve of the Erdogan-Putin meeting, rumor-based “reports” are making waves in Turkish media that the Gulen movement was trying to provoke a “Russian-Turkish war” and that this alleged “CIA-MI6-Mossad plan” was hatched to distance NATO-member Turkey from establishing close relations with Russia. A French newspaper report is frequently quoted as a “reliable Western source,” claiming that on the night of the coup attempt “U.S.-supported jet fighters tried to bomb Erdogan’s hotel, where he was on vacation, while Putin ordered his Russian jet fighters to defend Erdogan.”

It seems that apart from the effort to develop a common Turkish-Russian position on Syria, the meeting will be cause for celebration — with Erdogan thanking Putin for his support following the failed coup attempt, and Putin assuring the Turkish leader of future Russian support.

Analyst and columnist Kadri Gursel summarized it this way, “In order to frighten the West, Erdogan will show that Turkey is getting increasingly closer to Russia.”

In reality, however, Russia does not have much to offer to Ankara in terms of investment, technology, defense, and trade. Turkey has a deep and interdependent relationship with the West. A Turkey decoupled from the West is bad for NATO and bad for the West, but much worse for Turkey itself.