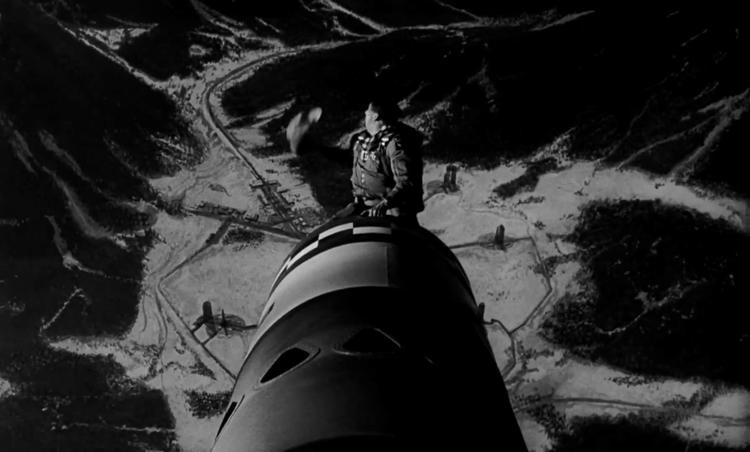 I have long wondered why no one in Hollywood has remade Stanley Kubricks’s 1964 “Dr. Strangelove: Or How I learned to Stop worrying and Love the Bomb.” They’ve remade almost everything else from the 1960s, but that classic Peter Sellers film languishes in black and white and I’m not sure most Millennials have seen it.

From the paranoid military officer Brigadier General Jack D. Ripper (Sterling Hayden), who is convinced that Communists are diluting the integrity of his bodily fluids (nowadays it would surely be Muslims) to the ex-Nazi evil genius (Peter Sellers) who can barely constrain himself from repeated Hitler salutes to the exuberant cowboy fighter pilot Major T. J. “King” Kong (Slim Pickens), who rides a nuke down on the old Soviet Union, the film is an archive of the craziest Cold War excesses.

Now it turns out that Donald Trump is remaking Dr. Strangelove in real life.

TYT Nation points out that Joe Scarborough of MSNBC’s ‘Morning Joe’ revealed that a national security expert briefed Trump a while ago, and that Trump asked three times in a one-hour briefing why we can’t use nuclear weapons, since we have them:

Since the end of WW II, nuclear weapons have been defensive, part of a deterrence strategy to avoid being attacked (MAD or Mutually Assured Destruction).

But Trump is not alone in his notion of actually deploying nuclear weapons in an offensive capacity. Sen. Ted Cruz talked about making the Syrian desert glow during the GOP primaries, clearly implying that he would nuke al-Raqqa, the capital of Daesh (ISIS, ISIL) in Syria.

Nuclear weapons produce fall-out, throwing enormous amounts of radioactive dirt into the air, which then settles on grass and gets into milk and the rest of the food supply. I was in London during the Chernobyl meltdown, which wasn’t nearly as big as a nuclear explosion, and the British authorities warned us against drinking milk that summer. So Cruz would have inflicted harm not only on Syria (most Syrians opposed Daesh) but also on Israel, Turkey, and much of Europe.

Worse than fallout is nuclear winter. As Carl Sagan pointed out in a famous panel interview in 1982, a full scale nuclear war could kill 2 billion people and throw so much dust into the atmosphere that vegetation would die off and lead to the extinction of human life on earth. (Predictably, Henry Kissinger objected on the grounds that if the public knows such facts, it will interfere in policy-making on nuclear issues by policy elites like himself.)

I’ve never regretted more that Sagan, one of my heroes, is no longer with us to make this argument in public (he has few effective successors among practicing scientists willing to speak out on these issues).

Lest you think that nuclear weapons would never be deployed in an aggressive war, consider that in the 2001-2002 standoff between India and Pakistan, India moved its nuclear weapons close to the Pakistani border in what was likely prepositioning for possible deployment. (Since Pakistan had 14 small nuclear bombs then, tens of millions of people could have been killed).

Most Americans know about the 1962 Cuban Missile Crisis. But few know that during it, a US jet pilot wandered over the North Pole into Soviet territory and was in danger from MiGs that were scrambled. The US sent in a nuclear=armed escort to rescue the pilot and apparently that escort was authorized to fire the nukes under their wings at will.

Both in the 1956 and 1973 Israeli-Arab wars, the US went on high nuclear alert. In the 1956 case a routine Soviet naval exercise in the Black Sea combined with a misunderstanding of a flock of swans put the world on the brink.

Although it is probably not true that Moshe Dayan pushed the Israeli cabinet to use nuclear weapons in the 1973 war, it does seem likely that he proposed blowing up a nuclear weapon as a demonstration of Israel’s power, to give the advancing Syrian and Egyptian armies pause. But such a provocative action might well have brought a response from the Soviet Union, which was backing the Arab League forces, and so still contained the possibility of an escalation.

Then there were a couple false alarms at NORAD in the 1980s, when computer equipment went crazy and showed that Soviet warheads were already airborne. If Ronald Reagan, who may already have been suffering from Alzheimers, had shot from the hip in response, we might have seen a nuclear winter right then and there.

There is always a danger that if a weapon is in the arsenal, it will be deployed. If the leader of a country is reckless (Dayan) or addled (Trump, Kim Jong Un), then all bets are off. That is why Republican primary voters need to be shamed for their irresponsibility; you don’t give an obvious maniac the nuclear codes.