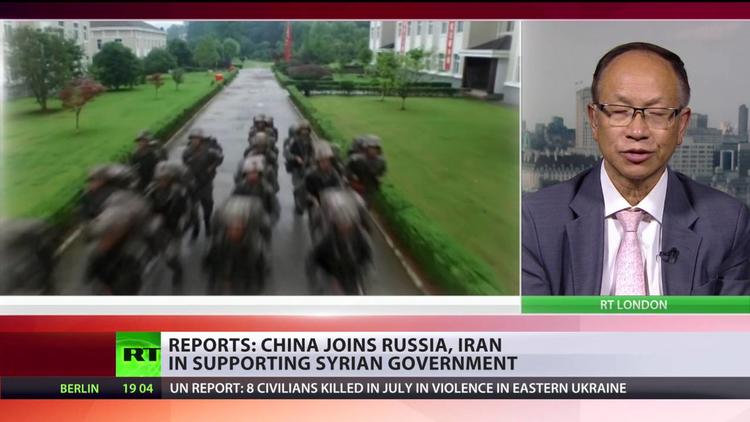 The Arabic press is reporting that a high Chinese official on a visit to Damascus has announced that Beijing intends to strengthen its military relationship with the current Syrian government. At the same time he affirmed that China would avoid involvement in the civil war. Reuters broke the story in the West.

China has a long history of involvement in Syrian security affairs and is already doing some training of the Syrian military. But Beijing now seems intent on taking the relationship to the next level.

The news comes in the wake of reports that Russia is strengthening its own military ties with Iran and may be flying missions against fundamentalist rebels in Syria from that country.

China and Russia both belong to the Shanghai Cooperation Organization, which appears to see Iran and Syria as potential strategic assets in its rivalry with the US and NATO. They feel as though NATO stole Libya from them, and are determined to make a stand in Syria. The newspaper of the Chinese military said that Russia’s moves in Crimea and Syria should be studied by Chinese officers. Iran has observer status in the SCO.

The director of the Chinese Central Military Commission’s Office for International Military Cooperation, Rear Admiral Guan Youfei, made the remarks after meeting with Fahad Jassim al-Freij, the Syrian Defense Minister.

China’s Global Times quoted Hua Liming, former Chinese Ambassador to Iran, as saying that “China’s position on the Syrian crisis will not change, that is, [it will] allow the Syrians to decide their country’s destiny . . . Intervention from outside can only enlarge the crisis, so China will maintain the relationship with the government and encourage negotiations between different parties.”

The same newspaper said that “Observers said China is worried about the terrorists’ influence on religious extremists in the Xinjiang Uyghur Autonomous Region.”

That is, China’s interest in increasing its training of and support for the Syrian Arab Army of the al-Assad regime stems in part from fear of the hundreds of Uyghurs who have gone to join Daesh (ISIS, ISIL) or to follow the al-Qaeda operative Abu Muhammad al-Julani, leader of the Army of Syrian Conquest. They are apprehensive that these fighters will return to Xianjiang in northwest China and spread radicalism. China has about 40 million Muslims. Many are Han Chinese. But in the northwest, about 12 million Turkic Uyghurs live. The government has relocated millions of Han Chinese there to reinforce Beijing’s control, in the face of a small separatist movement. The Western intelligence agencies have been accused of stirring up the Uyghurs, as well.

The Global Times also quoted a professor of Middle East Studies at Shanghai International Studies University, Zhao Weiming, who suggested that the Syria play is payback by Beijing for perceived US interference in the South China Sea.

Professor Zhao further pointed out that China may see the Syrian civil war as beginning to wind down, given the ceasefire agreement of spring-summer 2016 (and despite its recently unraveling). It might then be an opportune time for China to put down a marker of influence in Syria without risking getting involved in the civil war or in the Iran-Saudi rivalry.