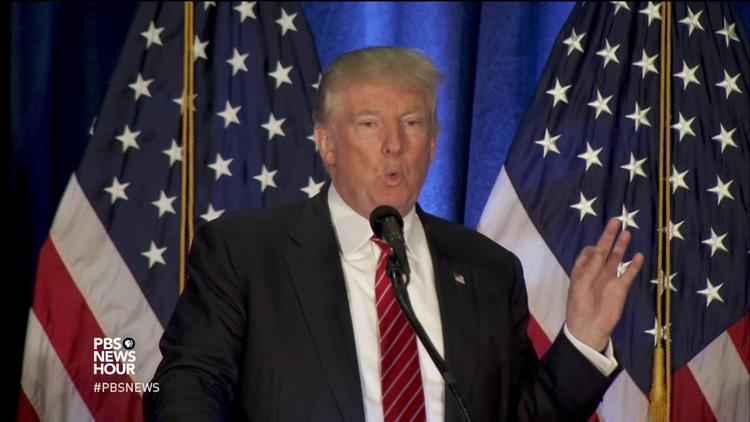 In an attempt at a foreign policy speech in Youngstown, Ohio, on Monday, Donald Trump attempted to get back to his fearmongering roots by focusing on the threat of ISIL, which he depicted as a hydra-headed menace with tentacles in a range of Western countries including the US.

In fact, Daesh (ISIS, ISIL) is a relatively small organization that has been shrinking in both personnel and territory. It has lost its footholds in Diyala, al-Anbar and Salahuddin provinces in Iraq and a campaign against its remaining stronghold in that country, Mosul, by Kurdish and Shiite forces is now building. It is possible that it will be finished as a holder of territory in Iraq before the November election in the US. Likewise, in Syria, Daesh has just lost Manbij, which sits astride one of its major smuggling routes. It has also lost most of northern al-Raqqa province, the city of Palmyra, and other important real estate. In Libya, its fighters in Sirte have fled the city under US bombardment. As for Sinai, those are mistreated Sinai residents– some of them Bedouin tribes, who have been fighting the Egyptian army for some time and only declared themselves ISIL to gain the benefits of franchising, sort of like a local burger joint putting up golden arches and pretending it is a McDonald’s. The terrorism it has pulled off in Europe has been of the lazy soft-target variety, and while the deaths it has caused have been traumatic and are horrific, the incidents haven’t actually been a challenge to national security anywhere outside the Middle East.

Trump supported the interventions he now condemns, including the Iraq War and the no-fly zone in Libya, so his picture of a Middle East in flames as a result of President Obama’s policies is ignoring his own positions.

Trump said he wanted to ally with Russia against ISIL. De facto, that is an arrangement President Obama and Secretary of State John Kerry have already worked out.

Having tried to scare people with an ISIL clearly in rapid decline, he went on to bash ordinary Muslims again. He wants to exclude immigrants from “volatile” parts of the world, and wants to exclude those who question gay marriage e.g.

He called for extreme vetting of those admitted. But US visa procedures, unbeknownst to Trump, are already extremely strict. His vague addition of the modifier “extreme” to “vetting” won’t make them more strict.

“We should only admit into this country those who share our values and respect our people. . . In addition to screening out all members or sympathizers of terrorist groups, we must also screen out any who have hostile attitudes towards our country or its principles – or who believe that Sharia law should supplant American law. Those who do not believe in our Constitution, or who support bigotry and hatred, will not be admitted.”

Sharia law is just Muslim religious law, akin to Roman Catholic canon law or Jewish religious law (Halakhah). It isn’t a substitute for the US constitution. Aside from a few countries like Saudi Arabia and Iran, it isn’t even part of the constitution of most Muslim countries (Turkey’s constitution is based on that of Switzerland; even Tunisia’s party of the religious right, al-Nahda, declined to push for putting shariah in the Tunisian constitution; etc., etc.)

Would believing in these things religiously make you ineligible to come to the US?

Marriage age for girls of 12

Burning at the stake for incest

If so, Trump would actually be excluding fundamentalist Jews from the US. Some American Jews are worried that Trump would exclude Orthodox and ultra-Orthodox Jews from Israel.

Likewise, a lot of Ukrainians, who are also from a volatile part of the world, likely don’t subscribe to some of the values Trump wants to make litmus tests.

Trump hopes for a bounce in the polls via this ugly religious bigotry. I am hoping that Americans are better than that.

PBS Newshour: “Trump reveals his national security plan — while Clinton says he doesn’t have one”