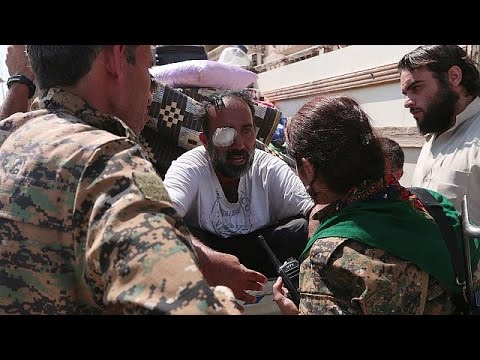 AP is reporting that Lieutenant General Sean MacFarland maintains that the number of ISIL fighters in Syria and Iraq is in steep decline, having fallen to as little as 15,000, down from 25,000 at the organization’s height.

In Iraq the organization has lost Tikrit, Beiji, Mt. Sinjar, Sinjar, Diyala, Ramadi and Falluja among other cities. In Syria it lost northern al-Raqqa, was pushed out of al-Hasaka, lost Palmyra.

It has lost funding through the bombing or capture of its oil refineries.

The joint Kurdish-Arab Syrian Democratic Forces backed by US special forces and US and allied air forces has consolidated its control over the key city of Manbij in northern Syria. Nairoz Kobani, spokeswoman for the Women Units of the leftist Kurdish YPG, says that the remaining 150 fighters are fleeing toward Turkey and have taken some 2,000 persons hostage. She said that those fleeing north are mostly foreign fighters from Russia, the Caucasus and North Africa. Local Syrian Daesh fighters just threw down their weapons and melded into the refugee flow pretending to be civilians.

Without Manbij, Daesh (ISIS, ISIL) will find it more difficult to import weapons and foreign fighters to al-Raqqa. Other routes still open to it, such as Jarabulus, are also under pressure and could be the next target of the Syrian Democratic Forces. It is much further to import foreign munitions.

Daesh as a territorial power is coming to a slow end; Daesh as a source of terrorism still has a good long run.
—-