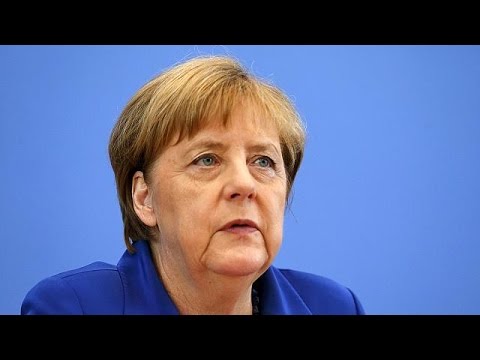 German Chancellor Angela Merkel said at a campaign event on Wednesday evening, that there is no relationship between the influx of some one million migrants and refugees into Germany in the past year and the incidents of radical Muslim violence in the country.

She pointed out that Muslim radicalism as a phenomenon pre-existed the rise of Daesh (ISIS, ISIL) and that even Daesh was there before the refugee crisis. She said that German authorities have been worried about Daesh for some years.

To some extent she blamed social media rather the the influx of refugees.

She said that the right way to deal with domestic terrorism is more state powers and better trained police.

Reuters reports that Merkel said that forms of Islam compatible with the constitution are welcome in Germany:

“”We have said clearly that an Islam that works and lives on the basis of the constitution … belongs to Germany . . .”

About half of Germans agree with her. And what is remarkable is that you have the head of state talking in this clear-eyed and generous way about people who have lost everything and sought a better life. It is hard to imagine a US politician of Merkel’s level openly speaking out this way. Of course her party may suffer for it at the polls– we have yet to see. But Merkel is not backing down.

Merkel has long insisted that Islam belongs to Germany. I pointed out 18 months ago that this assertion is historically true.

If Germans did not want Islam to belong to Germany, they shouldn’t have gone out and subjugated e.g. Tanzania in the 19th century (although a mixed society it has a strong Muslim community). There was also German colonialism in West Africa, where there were also Muslims. If you go out an incorporate people into your empire, they belong to you whether they or you like it or not.

“Some 57% of Germans say in polls that they feel threatened by Islam. A country of 80 million, Germany has 4 million Muslims, 2/3s of them Turks. About half of these Turks of Muslim heritage, however, hail from the Alevi Shiite minority in Turkey, and many Alevi families became secular leftists in the 1960s and 1970s. So most Turkish Muslims are not interested in Sunni fundamentalism. Moreover, only about half of resident Muslims are citizens, so they are not in a position to ‘Islamize’ anything, even if they wanted to– which most do not. In polling, Germans give unrealistically high estimates of how many Muslims they think there are in the country.

Germans have very small family size and the country is projected to fall from 80 million to only 60 million by 2050, thus falling behind France, which is growing through immigration. Merkel’s government appears to favor emulating the French policy, encouraging immigration, to avoid Germany losing its economic and demographic leadership role in Europe”.

Besides, there was radical terrorism of leftist and rightist varieties in Germany in the twentieth century and it was far more deadly than the Daesh attacks of today (as horrific and inexcusable as those are). To start the clock on social violence with last year’s arrival of so many immigrants and refugees and then to blame everything on them is ahistorical thinking.

Angela Merkel stands by refugee policy after attacks in Germany