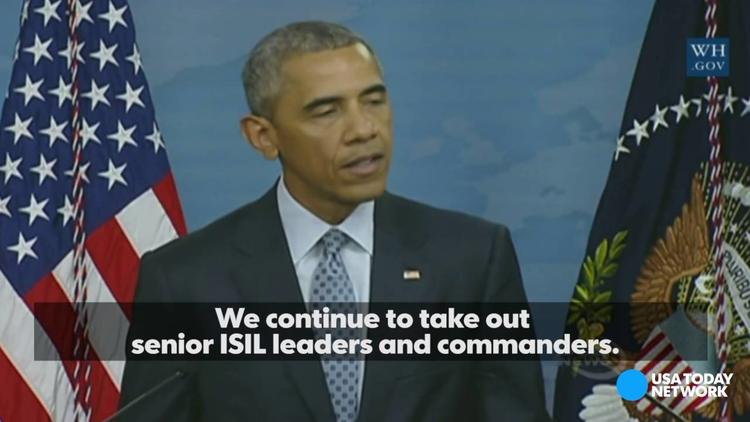 Trump in his daily free association exercise accused President Obama of creating Daesh (ISIL, ISIS) in Iraq by withdrawing troops from that country in 2011. It is an accusation he has in past made against Sec. Clinton, but now he is shifting blame to Obama.

Obama did not withdraw troops from Iraq in 2011 all on his own. The timetable for withdrawal was set by the Bush administration.

The US government determined that they could not put US troops in Iraq in the position of possibly being prosecuted by Iraqi courts for war crimes if they fought in the country without a Status of Forces Agreement.

The Iraqi parliament declined to pass a SOFA that would let war-fighting Us troops stay in the country and would hold them harmless from legal action. I mean, you were asking representatives from Amara, from the Ahrar party of Shiite cleric Muqtada al-Sadr vote to keep US troops in the country.

The Sadrists, e.g., were all about anti-imperialism, and they really minded the civilian casualties caused by the US invasion and occupation. They weren’t going to vote to keep the US in the country.

So Obama was not asked to stay in Iraq by the sovereign Iraqi government, and international law made it impossible for him to keep troops there in a war-fighting capacity without an extra territoriality provision.
He simply abided by the agreement worked out by the Bush administration.

In 2011 when the civil war broke out in Syria, the elements of the ‘Islamic State of Iraq’ that had evolved out of al-Qaeda in Mesopotamia went to fight in Syria. Obama had nothing to do with that development.

There had been no al-Qaeda in Iraq before Bush invaded. Operatives flocked there to fight the US troops, and gathered under the rubric first of al-Tawhid of the Jordanian Abu Musab al-Zarqawi. But al-Zarqawi initially had bad relations with Usama Bin Laden. In order to fight the US presence, he made up and joined al-Qaeda and formed al-Qaeda in Mesopotamia. AFter he was killed by the US in 2006, the new, Iraqi leadership declared itself the Islamic State of Iraq and deepened their al-Qaeda affiliation.

It wasn’t the US withdrawal from Iraq in 2011 that allowed it ultimately to take over western and northern Iraq. It was its success in Syria, where it preyed on other radical Muslim factions.

And it was the marginalization of the Iraqi Sunnis by Prime Minister Nuri al-Maliki, whose Shiite majority came to power under Bush, that promoted Daesh.

It is rich for Trump to now come and blame Obama for the actions and reactions of the Republicans who invaded and occupied Iraq.

USA Today from earlier in the week: ”
President Obama: None of ISIL’s leaders are safe”