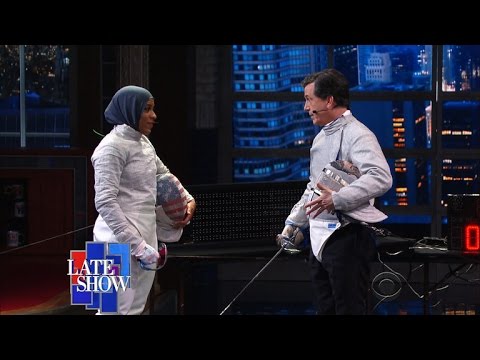 Ibtihaj Muhammad, the first American woman athlete to compete in the Olympics wearing the hijab or Muslim head-covering, is a fatal complication to Donald Trump’s Islamophobia.

Opening Ceremonies! One of the best days of my life! #TeamUSA?? pic.twitter.com/nbV1kEWO9g

Ms. Muhammad shared in a team bronze medal in the saber competition in fencing at Rio. Trump disguises his bigotry toward Muslims by invoking them in the same breath with immigration, but a majority of the over 1 percent of Americans who are Muslim are citizens. One major group of Muslims, the African-Americans, are much more long-standing Americans than he is.

Never let another person’s misconceptions about your race, gender or religion hinder you from reaching your goals… https://t.co/T7IwjvfeVx

Trump says there is something the matter with that community because it has a violent fringe, and wants to stop Muslims from coming to the US. But Trump’s ethnic groups, white Presbyterians and Germans, have both been known to have, let us say, a violent fringe, and we don’t ban them from travel to America. Here are some ways Ms. Muhammad is a much more exemplary American than Trump.

.@realDonaldTrump if you #banMuslims, how will #TeamUSA‘s Muslim athletes get to Olympic qualifiers? ??

1. Trump’s grandfather immigrated to the US, and his mother was Scottish, so he is a hyphenated American. The Muhammad family was kidnapped from Africa, possibly from a Muslim village in Senegal or Nigeria, and brought to North America sometime in the sixteenth through eighteenth centuries. They’ve been here a damn sight longer than the Trumps and so by Trump’s lights have a better claim on American-ness than the Donald.

Islam’s history in the United States begins with black history

2. Her father worked as a policeman. In contrast, Trump cultivates the more violent bikers and white supremacists who hate law enforcement.

3. Her mother worked in special education. Children exposed to Trump’s serial ramblings will need an extra 12 years just to unlearn all the Trumpisms he has put in their heads.

4. Ms. Muhammad makes America proud and defends our diversity. Trump makes us ashamed and attacks people different from himself.

We’re living in a time where people feel comfortable spewing their hate and harassing the innocent on our streets. We need change.

5. The team of which Ms. Muhammad is a part won a bronze medal for the USA at the Olympics in fencing. Trump fired people on a reality show for a few years.