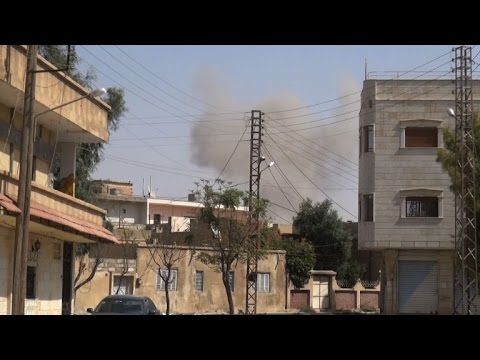 The fighting that has broken out between Kurdish YPG fighters and the Syrian Arab Army in Hasaka, northeast Syria, is hardly a new thing. There were clashes in April.

Syria says that the Kurds brought it on themselves by trying to expand into government-held territory.

As the US has deepened its involvement in Syria, this round of fighting could drag the US into war.

The People’s Protection Units or YPG is a Syrian Kurdish militia that now holds large swathes of northern Syria. These leftist Kurds are in conflict with Daesh (ISIS, ISIL) and with the fundamentalist rightwing Arab guerrillas such as the al-Qaeda-linked Army of Syrian Conquest and the Saudi-backed Army of Islam.

Since the YPG is the only really reliable ground force willing and able to take on Daesh, the US has allied with it (over the objections of Turkey). Washington has embedded some 200 US troops with YPG units (some were even caught wearing YPG insignia).

In Hasaka and Qamishli, the YPG holds territory adjacent to that held by the army of the Syrian government, led by Bashar al-Assad. Al-Assad doesn’t like the leftist Kurds, whom he considers separatists, but he has bigger problems, and so often the YPG is left alone by the Syrian army, for now.

But the Syrian Arab Army (SAA) maintains that the YPG has been expanding its territory in Hasaka at the expense of Damascus. So, with all the subtlety of a mobster, al-Assad scrambled fighter jets and bombed YPG-held Hasaka.

But if you bomb the YPG, you might well hit an American special operations soldier.

Washington minded, and flew its own jets over Hasaka on Friday, apparently scaring off the Syrian pilots (the Pentagon tried to play this confrontation down).

But this US and coalition intervention could have a long tail. Is the US committing itself to a no-fly-zone over Rojava, the area of Syria on which the YPG wants to erect a mini-state? Arguably, the US no-fly-zone over Iraq helped get us into the Iraq War.

So not only are US troops in danger of being killed by al-Assad’s mad bombers (as tens of thousands of innocent civilians have been) but US pilots are in danger at any moment of going to war in the skies against the Syrian air force.

Me, I think this is a dangerous flashpoint.

I mean, it may blow over. But if al-Assad killed a US soldier operating among the Kurds, can you imagine the storm of feces in Washington? And if it happens once either of the presidential candidates get into office, it could be the Gulf of Tonkin all over again.