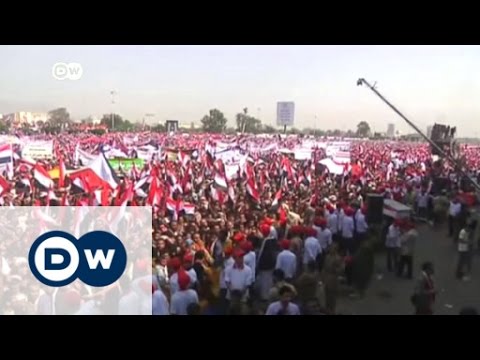 The Houthi Ansarullah Movement that controls most of north and west Yemen staged what was by all accounts an enormous demonstration in the capital of Sanaa on Saturday. It may have been the single largest demonstration in the country’s history. While it was unlikely actually to have involved a million people, it did probably tens of thousands, and it showed how strong grassroots support for the Houthis is in the north.

The massive demonstration in Sab`in Park in downtown Sanaa was intended to send a signal to Saudi Arabia and its coalition that the Houthis are enormously popular in the north and that the General People’s Congress, the parliament of Yemen in its present form, shares in that popularity.

If so, Saudi Arabia did not get that message. Its fighter-bombers targeted downtown Sanaa in the midst of the demonstration, which arguably was a war crime (you aren’t allowed to endanger large numbers of civilians in war if you don’t have to). The Saudis are at war with rebel supporters of the Houthis, whom Saudi Arabian inaccurately depicts as a cat’s paw of Iran.

The Houthis are a fundamentalist movement growing out of the moderate Zaidi branch of Shiite Islam in north Yemen. They were one of the groups that supported the Yemeni revolution of 2011-2012, which deposed ‘president for life’ Ali Abdullah Saleh. But during the transition to elected governments, the Houthis derailed the country’s move to democracy by making a coup and gradually dismissing civilian high governing officials.

About a third of Yemenis are Zaidis, but the proportion is much more enormous if we look only at their power base in the northwest of the country. Sunni Aden and some other regions were liberated from Houthi control by Saudi Arabia and its allies in the Gulf Cooperation Council (plus Morocco and Jordan).

The Saudi-led group has bombarded Yemen intensely for the past year, knocking out key infrastructure and killing or endangering the civilian population.

One Houthi spokesman said that the crowds in the square had sent a message to Saudi Arabia and its allies, that the Houthis are here to stay and retain a great deal of popularity.

The indiscriminate Saudi bombing of Yemen and the destruction of civilian infrastructure such as bridges and ports has caused the Obama administration to begin distancing itself from this war. But too late– most Yemenis see the US as behind the GCC effort.