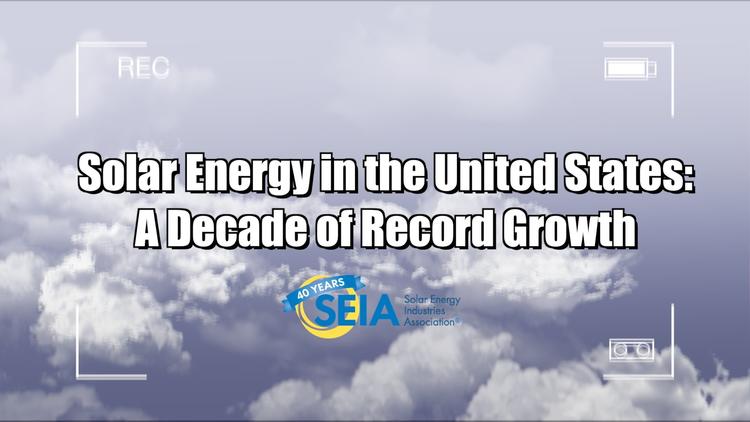 As we celebrate American workers (I prefer to honor workers today rather than the abstract “labor”), let’s remember where their future lies. And that is, in part, in the renewable energy sector.

“Solar Energy in the United States: A Decade of Record Growth”

The rapid growth of wind, solar and other renewables in the United States is already having a significant impact on the work force. But, as Jigar Shah laments, many journalists and others are clueless about this fast-changing landscape, stuck in a past in which coal miners are the real workers.

We geezers grew up on Lava soap commercials, featuring workers who got their hands really dirty, I mean below the epidermis dirty, deep in the cuticles dirty, from manning up and doing manly work. Back in the 50s somebody considered that maybe Lava was limiting its market this way, so they added a bit about how the soap was mild enough for the little lady and the kid, too. But we all knew that only one kind of person needed Lava soap. And that kind of person, the geezers now editing the mass media seem to be convinced, didn’t have the time of day for science fiction daydreams like solar energy.

But in fact there are three times as many workers in the solar industry in the US as there are working in coal mines. And, it seems clear that coal is not the future, and coal miners need government programs to retrain them for other fields, including green energy installation and maintenance. In other words, solar and wind are not chimeras, hollow dreams of beardless idealist environmentalists blogging in their mother’s basement. They are real-world, massive industries that are employing more and more American workers, even as employment in the hydrocarbon sector has been dropping.

The people who can’t imagine this transformation are kind of like the 1899 newspaper editor who doubted there was a future for the noisy, smelly automobile because it would scare the horses.

So here are the facts [pdf], ma’am, for the hard-nosed Joe Friday types still brought to you by Lava soap.

1. Renewable energy employment in the US grew by 6% in 2015 to reach 769,000. A reminder: there are only 74,931 coal miners in the country, about a tenth the number that work in the renewables sector. Renewable energy workers form about 0.5 % of the US work force. But note that the sector is expanding much faster than the general growth rate of the economy and will become more and more important in coming years.

2. In particular, solar employment grew 22% in 2015, to reach 209,000. In other words, this sector grew 12 times as fast as the job market in general. And, 24% of these jobs were held by women, up from 19% in 2013– a bigger share than in oil and gas employment. Over half of these jobs are in the installation of solar panels. About 15% are in panel manufacturing. About 66% of solar jobs were in residential installation, while a little over a fifth were in utility-scale installation and maintenance. A sixth of these jobs were in the commercial sector (go, IKEA!) Remember that only 187,000 or so workers are employed in oil and gas extraction.

Let me just underline that the Chinese may well get ahead of us in the area of manufacturing inexpensive and efficient solar panels, since they are putting billions into R&D in this area. If so, the outcome will be a huge opportunity cost for American workers, since that 15% who work in manufacturing could be a much larger proportion.

3. Wind energy jobs grew 21% in 2015 with 88,000 jobs total in that industry. The US now has 8.6 gigawatts of wind power installed. Note that about a third of Iowa’s electricity, e.g. now comes from wind. The International Renewable Energy writes, ” Manufacturing factories employed 21,000 people; construction, project development and transportation accounted for 38,000 jobs, and operation and maintenance for 29,000 jobs

4. Among the best green jobs in the coming decade will be in wind energy fabrication, green farming, forestry, solar panel installation, green building, and conservation biology. Doing any of these jobs will no doubt require washing up at the end of the day with Lava soap.

5. I was giving 2015 statistics above. But 2016 is looking even better. Already since the beginning of this year, the wind energy industry has added 88,000 jobs! Texas leads in such jobs, with 24,000 wind power workers. By 2030, which isn’t far off and isn’t science fiction, the industry estimates that it will have 380,000 well-paying jobs nationally.

One final point. The fuel for solar and wind is free. At some point in the next 50 years, installation will be done or inexpensive, and the fuel will be gratis. The average worker will likely experience the equivalent of a 6% raise as a result. Inexpensive green energy will put money in all our pockets, instead of Saudi Arabia pickpocketing us for expensive and polluting petroleum.

So here’s to the future of the American worker, a green and prosperous future!