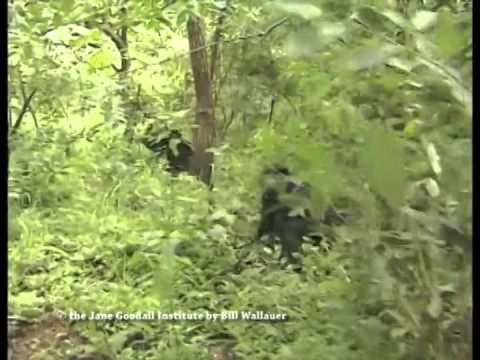 Chimpanzees throw rocks and cans at their rivals as “dominance rituals,” Goodall said, which in many ways reminds her of Donald Trump.

While different in looks, U.S. Republican presidential nominee Donald Trump and chimpanzees may have a lot in common, famed anthropologist Jane Goodall said, as many of his behaviors and outbursts remind her of male chimpanzee habits.

“In many ways the performances of Donald Trump remind me of male chimpanzees and their dominance rituals,” Goodall told the Atlantic as part of the magazine’s October issue and in a piece relating to the upcoming debate between Trump and Democraic presidential candidate Hillary Clinton.

In fact Goodall said the Republican nominee specifically reminded her of a chimp named Mike who she wrote about in “My Life With the Chimpanzees.” Mike used to kick cans down the road to create noise and scare rivals to show his dominance.

“The more vigorous and imaginative the display, the faster the individual is likely to rise in the hierarchy, and the longer he is likely to maintain that position,” she added. Mike also created a racket to send his rivals running away from any confrontation with him.

While Trump has yet to throw rocks at rivals or cans down the debate halls to scare his opponents, he did use insults and name-calling against other Republican candidates during primary debates earlier this year.

The real estate billionaire sure dominated those debates and the primaries season with his sexist insults, bragging about his penis and making insensitive and offensive jokes about his critics in media and politics.

Trump and Clinton will have their first debate on Sept 26. Goodall said she will be thinking of Mike as she watches the debate. Trump already boasted that he will win the debate, telling the New York Times “I know how to handle Hillary.”