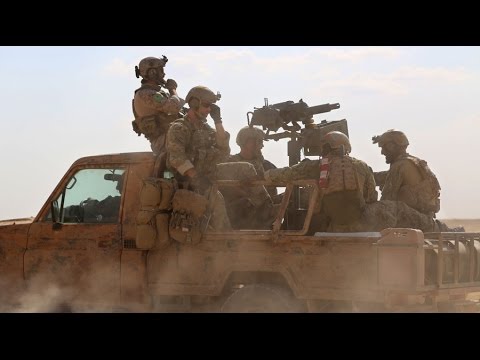 As Raf Sanchez of The Telegraph writes, fundamentalist militiamen of the US-backed Free Syrian Army chased US commandos out of al-Ray in Syria near the Turkish border, cursing them as “pigs” and “crusaders” and asserting that the US is attempting a military occupation of Syria.

Full video of #FSA chasing #US #SOF of #AlRai #Aleppo
"We're going to slaughter u. Ur coming to invade #Syria" pic.twitter.com/qy7fIVeG8x

Some 250 US troops are embedded with the leftist Kurdish militia, the YPG, and these fundamentalist Arab Syrian fighters have tangled with the Kurds over the latter’s hope of establishing a contiguous Kurdish mini-state in norther Syria.

Turkey’ has intervened in northern Syria, ostensibly against Daesh (ISIS, ISIL), but in reality to stop the Syrian Kurds from achieving their hoped-for mini-state or Rojava.

At one point US spec ops troops embedded with the Kurds were caught on camera wearing YPG insignia, which includes a hammer and sickle.

The pro-Kurdish press is puzzled as to why the US would risk such a two-faced policy in Syria.

It is urging Washington to ally directly with Kurdish Syrian rebels.

The contradictory US policies in Syria, of backing leftist Kurds when convenient and of supporting local fundamentalists on the other hand. Both are theoretically opposed to Daesh, but neither has exhibited either fear or loathing of Daesh sufficient to make them fight the hard line organization systematically in al-Raqqa province, its base.

The Kurdish YPG did fight Daesh and take the city of Manbij away from the terrorist organization. But this fighting was in furtherance of the Rojava project.