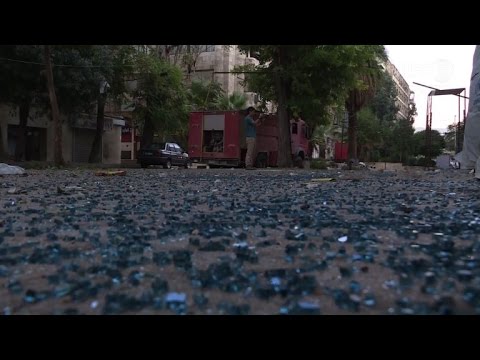 The London pan-Arab daily al-Quds al-`Arabi reports that the truce that began Monday night held during its first twenty-four hours, in the areas designated for a cease-fire by Russia and the United States. The boom of artillery fire faded away at nightfall on Monday. It coincided with the beginning of the Muslim holy day, Eid al-Adha. The Syrian Observatory also confirmed that the main battlefields in Aleppo, Damascus and Idlib had fallen quiet.

Secretary of State John Kerry cautioned that this cease-fire might be Syria’s last chance to remain together as a single country.

(Juan says that you can’t really tell about these things. The Lebanese fought for 15 years, then made peace. All 15 years people were saying it would split up into cantons, but it didn’t. Then South Sudan fought a separatist insurgency for years and finally did secede, breaking up Sudan; but that didn’t bring peace to South Sudan, where the factions no longer even have Khartoum to mediate between them. This fixation on breaking up countries is hard for me to understand).

One of the big changes the truce brought is an end to the intensive bombing of rebel-held areas by the Syrian Air Force. In the village of Talbisa on the outskirts of the city of Homs, rebel fighter Hassan Abu Nuh told AFP that the bombing had been keeping them up all night every night, but last night they were able to sleep.

Many Syrians in the countryside are skeptical that the truce will hold past the three days of the Eid.

The next step foreseen, if it becomes safe enough, is for humanitarian aid to begin being delivered to populations that had been under siege or whose supply routes had been cut by the fighting.

There was little sign of political compromise, however, which is a bad sign for the future. Regime strongman Bashar al-Assad gave a creepy speech in which he pledged to recover control of the entire country (and since he runs secret police that specialize in torturing political prisoners, he does mean control). Al-Assad also said that Turkey was not welcome to bring in humanitarian aid into Syrian territory unless Ankara cleared the shipments with Damascus first. Fat chance.

On the other hand, the remnants of the Free Syrian Army rebels (mostly Muslim Brotherhood) issued a communique outlining their discontents with the truce agreement, though they did not reject it. If the ceasefire holds in disputed areas for 48 hours, it will be renewed for another 48, and so on in hopes that it will become long-lasting.

The Freemen of Syria, a major hard line Salafi Jihadi group, did reject the ceasefire, as, of course, the Fateh al-Sham (formerly the Nusra Front) or Army of Syrian Conquest (whose leader is pledged to al-Qaeda).

On Monday, Russia asked the US and its air coalition to begin bombing Fateh al-Sham positions, on the grounds that they are terrorists.

The ceasefire does not cover either Fateh al-Sham or Daesh (ISIS, ISIL).

The US hit a Daesh facility on Monday that it believes has been used to produce chemical weapons.