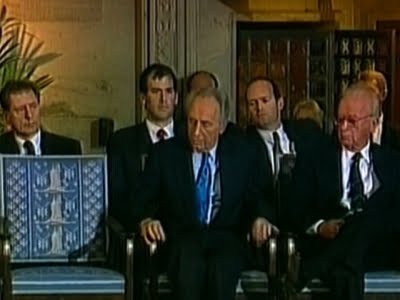 I met an emperor once, but have only met a couple of presidents. Shimon Peres (1923-2016) was one. I met him briefly in the Green Room when doing an interview with Charlie Rose.

The Polish-born Peres made his best impression on me with his support for the Oslo Accords of 1993 and 1995. Had this peace process succeeded, the Israeli-Palestinian conflict might have been settled once and for all, with incredibly positive benefits for Palestinians, Arabs, Muslims, Israel and the United States. One key argument for terrorism against the US, that it is helping crush the stateless Palestinians, would have evaporated.

I know all the critiques of Oslo– that it essentially made the PLO into a policeman providing security to Israel. But it did also aim to halt and reverse the colonization process on Occupied Palestinian territory, and in my view the Palestinians were more likely to succeed if they had any kind of a state. Peres was willing to give them that. The stateless do not even have the right to have rights.

Make no mistake, Peres was a hard line Israeli nationalist, and had viewed Palestinian nationalism as a dire enemy. He had helped get arms for the Jewish community to prosecute the 1947-48 war, during which Israel won its independence but ethnically cleansed some 740,000 Palestinians. He later served as minister of defense. He played a sinister role in proliferating nuclear arms to Israel.

But he was also a dedicated Socialist and at one point headed the Socialist International, and that stance gave him an appreciation of the need for human rights for all human beings.

After the first Palestinian uprising or Intifada of 1987-1991, he and Yitzhak Rabin became convinced that it was implausible for Israel permanently to annex Palestinian land while keeping Palestinians themselves stateless. Peres was then foreign minister, and it took guts for him to meet with his old enemy, Yasir Arafat, to prepare for a peace process.

I remember an interview Peres gave at that time, in which he ascribed his willingness to try to achieve an epochal change in the stagnant Mideast situation. He said he had read a lot of Buddhist thought, and it came to him that nothing is permanent. The Israeli-Palestinian conflict, he thought, is ephemeral. It would come to an end. He implied that he concluded that it might as well end sooner than later.

That’s about the coolest thing a sitting politician has ever said.

Again, I’m not naive. He could be paternalistic toward the Palestinians and chauvinist about Israel, and, indeed, pushed Israeli propaganda in the US relentlessly. But it is hard to fault a man for being a dedicated patriot. When push came to shove, he put everything on the line to try to make peace. He was viciously attacked and lambasted as a traitor and a fool by the Israeli right wing, which has now taken complete control of the government.

His friend and colleague, Yitzhak Rabin, who as prime minister signed off on the Oslo Accords, was brutally murdered by the Israeli far Right, and the Israeli Right in general bears responsibility, what with all its talk of treason (traitors are executed, no?). Peres risked the same fate.

Binyamin Netanyahu thought peace with the Palestinians and giving up the West Bank were stupid ideas and he vowed to annihilate the Oslo Accords so as to assure the future of Israeli colonization of Palestinian land. He ran against Peres for the position of prime minister and won. He succeeded in his plot to derail the peace process.

In 2013, when Peres was ceremonial president and Netanyahu was prime minister, Peres broke protocol to criticize Netanyahu for continuing to say he couldn’t make peace because he had no Palestinian partner. He said that he’d known Palestinian president Mahmoud Abbas for 30 years and knew that he was a peace partner. There is no Israeli left of any stature who would talk like that today.

Peres was the last decent man to rise high in Israeli politics. His removal from the scene leaves the management of the Israeli government to racists, warmongers, war criminals, ethnic cleansers, militant colonizers, and generally arrogant pricks and insufferable douchebags. They are smartly marching us toward a dangerous blow-up that Peres would have averted if they hadn’t marginalized him.