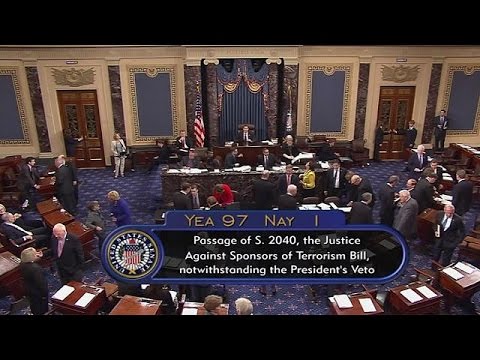 President Obama vetoed the Justice Against Sponsors of Terrorism Act, but Congress has for the first time in his presidency over-ridden his veto. This is a disastrous law with potentially ruinous effects on the US economy and US policy.

Saudi Arabia is extremely unpopular in the US, more especially on the Left, but also among right wing Islamophobes. But however appealing it is to let the 9/11 victim families sue Riyadh for the attacks, it is wrong-headed every which way from Sunday.

First of all, Saudi Arabia did not back Usama Bin Laden as of the Gulf War of 1990-1991, because King Fahd chose US troops to kick Saddam’s tanks out of Kuwait, and Bin Laden and al-Qaeda objected that bringing non-Muslim troops into the Arabian Peninsula was contrary to Islamic law. The Saudis therefore withdrew Bin Laden’s passport and he went into exile in Sudan. Saudia put pressure on Sudan to expel him, so he returned to Afghanistan. The Saudi government was angry at and afraid of Bin Laden.

The Saudi government and most high officials are heavily invested in the US stock market and have other American investments. Anyone could have predicted that an attack like 9/11 would wipe out the value of those investments, and it did. The Saudi government was not behind them and did not know they were coming. If they had suddenly pulled a lot of money out of the market, the SEC would have known about it. People complain that George W. Bush let Saudis vacationing in Florida leave the US. But what blockhead would vacation in the US in September of 2001 if he or she knew what was about to happen? Bush was afraid there would be mob action against these innocent Saudis.

Bin Laden got his start fund-raising for the Reagan administration’s jihadis (Mujahideen) in Pakistan and Afghanistan. The US was acting completely outside international law and an impartial court might well have considered the Reagan jihad against the Soviet occupation of Afghanistan material support for terrorism.

Saudi Arabia will be sued, and it might well lose in court; our judges are not Middle East experts and most of them couldn’t tell you the difference between a Sunni and a Shiite or a terrorist and a Salafi. A US court already found Shiite Iran complicit in al-Qaeda, which is like accusing the Unionists of Northern Ireland secretly supporting the Real IRA. American domestic institutions, including the FBI, and the courts, have often committed gross miscarriages of justice when it comes to the Middle East, out of a combination of ignorance and misplaced vindictiveness.

What country would be stupid enough to park almost a trillion dollars in the US if it thought that the courts might unfairly confiscate it? The Saudis have already said that they will take their investments elsewhere if JASTA passed.

Sovereign wealth funds are a big part of finance in today’s world, and they are most at risk from this overturning of sovereign immunity.

A lot of foreign governments and concerns invest in the US or park their money here, which helps the US economy enormously. One study found that “foreign multinational firms that invest in the United States are, alongside US-headquartered American multinationals, the most productive and highest-paying segment of the US economy. These firms conduct more research and development, provide more value added to US domestic inputs, and export more goods and services than other firms in the US economy.”

But the vague wording of the law (one person’s terrorist is another person’s freedom fighter) will allow all kinds of people to sue all kinds of governments. Irish-Americans could sue the UK for injuries during the Troubles in Northern Ireland. Palestinian-Americans will line up to sue Israel, and Jewish Americans will likely sue Palestine. Ukrainian-Americans will sue Russia. Old Pro-Gaddafi Libyan elites now in the US could sue France and Britain for supporting terrorist groups in Libya. Kenyan victims of the British colonial suppression of the Mau-Mau now in the US could sue Britain.

But why stop there? Why shouldn’t Saudi Arabia now let Saudi citizens sue the US over US support for the Israeli squatter terrorists on the West Bank? Or what if Pakistan lets the US be sued for its unilateral drone strikes, which often kill civilians, on Pakistani soil? Or Greek courts could, on the model of JASTA, allow Pakistanis in Greece to sue the US over strikes on Waziristan.

Instilling this fear in governments (and in corporations that have any government connections) could cause a fall in Direct Foreign Investment around the world and provoke a downward spiral of the world economy.

The US benefits from having the world’s reserve currency, but those at risk of being sued may well not only take their money out of the US but denominate it in Euros or Renminbi.

And after the judgments against Saudi Arabia and the hard feelings they will create, the next time the US goes to Riyadh and says, we need your help to track down so-and-so in al-Qaeda, they might get the cold shoulder.

Bin Laden deliberately packed the 9/11 hijackers with Saudis (he had volunteers from lots of countries) in hopes of driving a wedge between the US and Saudi Arabia, to make both countries more vulnerable to terrorism. He had failed until the US Congress decided to help him succeed.

Congress has done a lot of stupid things. But this one takes the cake. Ordinary Americans will suffer for this unwise law.

Euronews: “Obama slams vote to override his veto of 9/11 legislation”