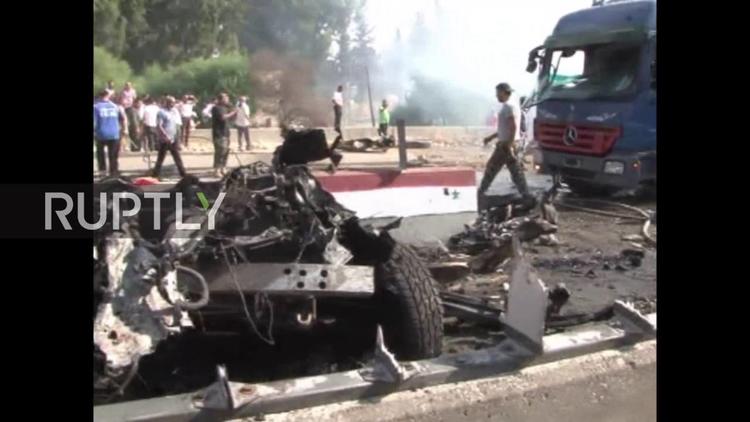 Daesh (ISIS, ISIL) is still acting like a military organization, but it has always mixed military with terrorist tactics. On Monday it slid toward the terrorist side of the spectrum, setting off 6 coordinated bombings that left over four dozen people dead. It mainly targeted, however, military personnel and infrastructure, suggesting that despite the organization’s recent severe battlefield setbacks, it is still engaged in a mainly military strategy. As it is rolled up, expect to see it hit more civilian, soft targets.

The bombings included a large blast at Tartus that damaged an important bridge. Russia leases a naval base at Tartus, and the road from there allows Russia to resupply the Syrian government troops down south in Aleppo. Trying to knock out a major bridge and to block traffic between the northwest ports and the southern capital is aimed at weakening the regime and hurting its Russian backers. Most of the dead were killed (35) in the Tartus bombing, with 48 wounded.

Another bombing hit the al-Zahra quarter of downtown Homs, which is garrisoned by the Syrian Arab Army, killing 4 security personnel. The Syrian regime had expelled fundamentalist militias, including Daesh and al-Qaeda elements, from this central place. Homs is crucial to the al-Assad regime’s logistics, since it is on the route from the ports of Latakia and Tartous to the capital.

In Saboura, 20 km west of Damascus on the outskirts of the capital, a bombing killed one person. The regime has been consolidating control over the capital and its hinterland in recent weeks, and Daesh is pushing back against any feeling of security in Damascus.

Daesh also hit a non-regime target, its deadly Kurdish enemy in al-Hasakah, with a bombing that left 6 security men and two civilians dead. The YPG militia of the Kurds has denied Daesh half of its base province, al-Raqqa, and has helped close off the terrorist organization’s smuggling routes to Turkey, having taken Manbij away from it last month. North of Manbij at Jarabulus, Turkey has sent in tanks and given support to fundamentalist rebel groups that despise Daesh. Its leadership may have felt the need for this wave of bombings to hurt its enemies militarily but also to announce that it is hardly finished as a force.

Another Daesh attack took place in the northeast Kurdish city of Qamishli.

Daesh claimed responsibility for the wave of bombings in a communique and also published details of the biographies of the suicide bombers. It said that it hit regime and Kurdish targets, likely in a bid to shore up its bona fides with the Sunni Arab opposition, which sees Daesh as a wretched combination of brutal and ineffective against the regime.