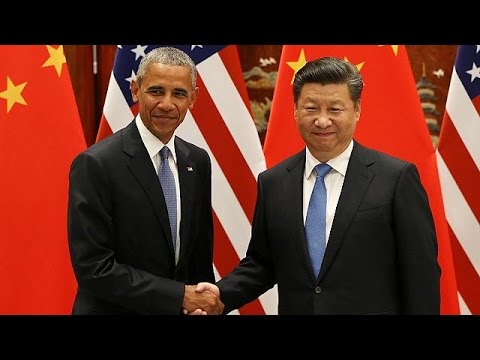 HONOLULU, Hawaii (IPS) – The world’s super-polluters – the United States and China – have formally joined the Paris Agreement on climate change in a symbolic show of unity.

At a ceremony in the eastern Chinese city of Hangzhou, where China is hosting a summit of G20 industrialised nations, President Barack Obama and President Xi Jinping handed their documents of ratification to UN Secretary-General Ban Ki-moon.

In contrast to the excitement in Honolulu among the world’s leading environmental activists and scientists, the announcement that Obama had used his executive authority to accede to the Paris Agreement was widely ignored by the major U.S. networks.

The joint move by the U.S. and China, which account for nearly 40 percent of global carbon emissions, paves the way for the Paris Agreement forged last December to enter into force, most likely by the end of the year. For the agreement to enter into effect and start to be implemented, at least 55 countries representing at least 55 percent of global emissions need to formally join.

The UN Secretary General praised Obama for his “inspiring” leadership. He said Obama and Xi had both been “far-sighted, bold and ambitious”.

The joint accession by the world’s biggest polluters was enthusiastically welcomed in Honolulu where the International Union for Conservation of Nature, which groups governments and NGOs, is holding a key congress that aims to chart the future path for stopping the planet’s slide into environmental ruin.

“This is a momentous event,” Xavier Sticker, France’s ambassador for the environment, said of the ratification by the U.S. and China. He told IPS it was expected to pave the way for many other countries to follow. But he cautioned that the European Union needs to accede as a bloc and that the internal complexities of national political systems could lead to delays. Belgium requires the assent of seven legislative assemblies, for example. France has already ratified but the UK has not.

Delegates at the IUCN World Conservation Congress warned that there was a risk for the European Union that the Paris Agreement implementation taskforce would be formed next month without EU involvement.

Patricia Espinosa, head of the UN Framework Convention on Climate Change, urged IUCN delegates representing the global conservation community to lobby governments on what must be done to achieve the Paris Agreement targets on emissions and limiting the rise of global temperatures.

“We are very excited about this good news, for the early entry into force of the Paris Agreement. No one had imagined it would be this year,” she said shortly before official confirmation arrived from Hangzhou.

In contrast to the excitement in Honolulu among the world’s leading environmental activists and scientists, the announcement that Obama had used his executive authority to accede to the Paris Agreement was widely ignored by the major US networks in their news bulletins. Ironically, however, there was considerable coverage of Tropical Storm Hermine moving up the east coast of the U.S. on Labour Day weekend, possibly turning back into hurricane force, and also of Hurricane Lester brushing past Hawaii.

“We are here together because we believe that for all the challenges that we face, the growing threat of climate change could define the contours of this century more dramatically than any other challenge,” Obama said in a speech in Hangzhou.

“And someday we may see this as the moment that we finally decided to save our planet,” he added. “There are no shortage of cynics who thought the agreement would not happen. But they missed two big things: The investments that we made to allow for incredible innovation in clean energy, and the strong, principled diplomacy over the course of years that we were able to see pay off in the Paris Agreement. The United States and China were central to that effort. Over the past few years, our joint leadership on climate has been one of the most significant drivers of global action,” Obama said.

Xi was reported as calling the Paris Agreement a milestone that marks the “emergence of a global government system” for climate change. “Our response to climate change bears on the future of our people and the well-being of mankind,” China’s president said.

The accession of China and the U.S. bring to 25 the number of countries to have ratified so far. Diplomatic pressure is expected to be ramped up on other major polluters, such as India and Russia.

But scientists and activists are warning that the Paris Agreement target of keeping temperature rises “well below” 2 degrees centigrade, with a soft target of 1.5 degrees, is already on its way to being breached as the world records a succession of the hottest months on record.

“What’s needed is comprehensive and urgent action now to slash emissions and build a low-carbon future,” Friends of the Earth commented.

The Paris Agreement also provides for 100 billion dollars a year in climate finance for developing countries by 2020, with a commitment to further finance in the future.

The U.S. and China have set widely differing targets on carbon emissions, because of their different stages of economic development. The U.S. plans over the next 10 years to reduce emissions by over a quarter below the level of 2005, while China says it intends to stop increasing its emissions by 2030.