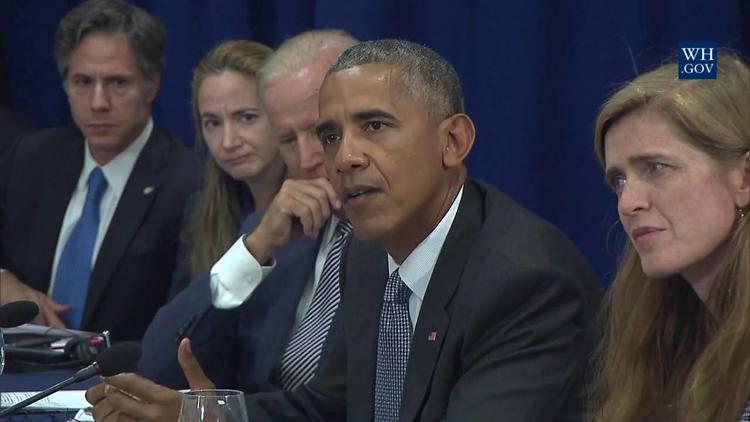 President Obama met yesterday with Iraqi Prime Minister Haydar al-Abadi and discussed the coming campaign to take the northern Iraqi city of Mosul away from Daesh, entirely destroying the terrorist organization’s territorial power in Iraq. Obama expects the campaign to be launched before the end of 2016, and said that the world would have to step up with contributions to rebuild Mosul in the aftermath (the only way to ensure that Sunni Arabs continue to reject radicalism and are reintegrated into Iraq is to ensure their economic prosperity and political dignity– something the government of Shiite hard liner Nouri al-Maliki [PM 2006-2014] never realized).

Obama’s vision for Mosul will face challenges. First, the city will be liberated in part by hard line pro-Iranian Shiite militias, whose presence is not welcomed by the Sunni Arab Mosulis, and who have sometimes committed reprisal attacks against Sunni families they see as collaborators. Likewise, Kurdish fighters of the Peshmerga will play a key role, which again may disturb a lot of Sunni Arabs. The Baghdad government of al-Abadi and its army still have to prove to the Sunni Arabs of the north that they are national and not sectarian. Finally, international calls for help face a lot of aid fatigue in the wake of the refugee crisis kicked off by the US invasion and destabilization of Iraq. Getting the G8 to pledge aid for Mosul and actually collecting the pledges are not the same thing.

Al-Bawaba reports that the arrival of hundreds of US troops at the Qayara base south of Mosul, and the focus of Iraqi military commanders on securing the city after the assault, show that the launching of campaign to take Mosul from Daesh (ISIS, ISIL) is near.

Mosul is the third largest city in Iraq, after the capital of Baghdad and the southern port of Basra. Unlike the other two, it is largely Sunni Arab. It probably still has a million people, down from two million before its population brought Daesh in, in summer 2014, in hopes of escaping the rule of then prime minister Nouri al-Maliki, a hard line Shiite. The Mosul uprising against the Baghdad government was not itself fundamentalist in character, even if it allowed Daesh into the city. In a 2012 poll some 75% of Sunni Arab Iraqis said they wanted a separation of religion and state, and most had been shaped by the secularism of the left-leaning Baath Party 1968-2003. The Sunni Arabs of Mosul just had come to see al-Maliki’s rule as oppressive and sectarian, and wanted out from under it.

Some 500,000 Mosul residents immediately escaped once Daesh took over (the Mosul political elite thought they could handle the guerrillas but the latter took over and screwed them). In the past two years my educated guess is that another half million have gotten out (sometimes at the price of turning their property over to Daesh). From accounts of Iraqi journalists who have sneaked in and out, it appears that by now everyone in Mosul is miserable and would welcome the Iraqi army, even if it is being sent by a Shiite prime minister, Haydar al-Abadi.

The military campaign against Daesh, however, will not be prosecuted only by the Iraqi Army, which probably is still too weak to win it (the army collapsed in 2014 and only some units are back up to speed after US training and equipment, especially the special operations counter-terrorism regiment). Al-Abadi has pledged, over the objections of Sunni Arab notables from the north, that Shiite militias will play an significant role in the liberation of Mosul.

Hadi al-Amiri, head of one of the major militias, the Badr Corps, announced yesterday that no foreign land troops would be involved in the battle of Mosul. He admitted, however, that there would be foreign (i.e. mainly American) air support. In part, he was rejecting the idea that Turkish troops might play a role in the assault. The other issue is the Americans. The Badr Corps has a close relationship to the Iranian Revolutionary Guards Corps (indeed is its Iraqi offspring) and its members are sensitive to charges of abetting imperialism by fighting shoulder to shoulder alongside US troops.

The US special ops forces at Qayara, however, are not a war-fighting infantry but rather will advise the Iraqi army on tactics once the campaign begins. Al-Amiri may not be happy about this US support role, but he can honestly say that American infantry won’t be part of the assault. He underscored that the Shiite militias will definitely play a central role in the assault on Mosul, alongside the Iraqi Army and the Peshmerga Kurdistan paramilitary. (The involvement of the Kurds in conquering a Sunni Arab city is also a touchy issue, especially since expansionist Kurdish nationalists have in the past vowed to incorporate Mosul into their Kurdistan superprovince of Iraq.)

Iraqi military intelligence has managed to get large numbers of free cell phones to Mosul residents. Its spokesman assured them that Daesh does not have the technical capability to tap these cell phones and cannot know what is said on them. The Baghdad government is urging Mosul residents to call its officials and to convey to the army the vulnerabilities of Daesh inside Mosul.