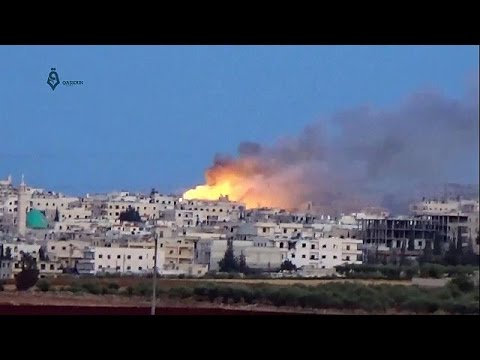 Only a week after seeming to agree to a ceasefire, Russia and the Syrian regime in Damascus appear to have decided to throw caution to the winds and simply wipe out the pocket of rebel resistance in East Aleppo.

If the regime has all of Aleppo, all of Damascus, Homs, Hama and Latakia, then it has Syria. Poor, rural, thinly populated provinces such as Idlib (held by al-Qaeda and its allies) and Raqqa & Deir al-Zor (held by Daesh/ISIL) just don’t count. They can make trouble from the margins, sort of the way FARK in Colombia did for decades, but they can’t win.

The military blog Sic Semper Tyrranis is convinced that the Syrian Arab Army and the Russian Aerospace forces can win the war outright. If they mean by winning what I just said– taking and holding all the major urban population centers– then yes. If they mean taking back control over the whole country, then no. Damascus just doesn’t have the troops to take back the rural Sunni areas, and nor can it prevent them from attacking regime forces. Moreover, it is unlikely that Damascus will ever really get control back of the Kurdish regions of the northeast, where the YPG is backed by the Pentagon– and that is 10 percent of Syria’s population and an important agricultural area.

So the regime can have 70% of Syria population-wise, perhaps, though in a fragile way that leaves much of the population open to violence. (Colombia in the days of high FARK activity was among the more violent societies in the world).

Still, taking back all of Aleppo and seeing Daesh strangled to the east by the Kurds and by a newly effective Turkish barricade would be an enormous victory for Damascus.

Unfortunately, precisely because the Syrian Arab Army is woefully understaffed, the methods the regime is using against East Aleppo are extremely brutal.

The Syrian Arab Army took the strategic Palestinian refugee camp, Handarat, near East Aleppo, late last week, but al-Qaeda and its allies say they have recovered it. Some of the bombing was in support of the Syrian army’s attempt to make that advance.

Damascus has put the civilian population under a siege for the last 20 days, and no supplies have come in for weeks. Food staples are running low and so are essential medicines, for the 200,000 to 300,000 who live in East Aleppo. This weekend, the Syrian Air Force intensively bombed civilian neighborhoods, allegedly joined by Russian Aerospace fighter-jets. (That’s what Moscow now calls their air force, and since they can get to space but the US no longer can, I guess they have dibs on it.)

On Sunday, the bombardment of East Aleppo by jets and helicopter gunships is said to have killed 66 persons and wounded some 200. While the Arab press says all of these were women and children, I presume some were guerrillas targeted for elimination by Damascus and Moscow, and that the rest were what the military calls collateral damage– i.e. innocent bystanders savagely murdered from the sky. The neighborhoods targeted were al-Halak, Bustan al-Basha, al-Ard al-Hamra’, Tariq al-Bab, al-Muyassar, al-Mashhad, al-Salihin, al-Qatarji, and al-Ansari.

Arab sources say that since the ceasefire collapsed on Sept. 19, 378 are dead and 1407 wounded.

The siege and the air campaign are surely softening up measures. At some point the Syrian army, supported by Hizbullah and by a new wave of Iraqi Shiite volunteers, will have to invade East Aleppo and take territory. From what we are seeing, it will be a horrible thing, with tens of thousands of new refugees created and a large civilian death toll.

But it will also make the regime unstoppable. Three and a half years ago, the rebels thought they could take Homs and cut Damascus off from resupply by cutting the road to the key Mediterranean port of Latakia. Hizbullah intervened and the rebels were defeated in Homs. Then two years ago, the al-Qaeda-led forces swept into Idlib and thought they might be able to just take the port of Latakia, after which they could starve out the southern capital of Damascus. But last fall Russia intervened and pushed them out of Latakia province, and built up the Tartous base outside Latakia, making the point that Moscow won’t let it fall. So the Salafi forces are bottled up in Idlib and have not prospect of breaking out or challenging the regime in any serious way. Now the FSA may be about to lose East Aleppo. The rebel position in the north is being eroded. And as we speak there is no plausible way for it to overthrow the Syrian government in any time scale that matters.

What is likely is that the rebels can keep enough rural territory to prove a thorn in the regime’s side for years to come, and peace is still distant. And even if the regime really could win, remember that it has killed tens of thousands and is not forgiving. The bloodshed won’t stop soon.