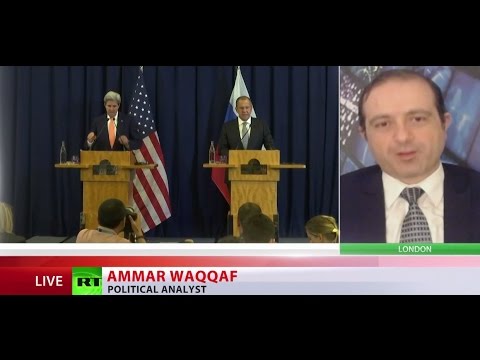 The Pentagon isn’t going to be happy about this.

Secretary of State John Kerry and Russian Foreign Minister Sergei Lavrov announced an agreement on a Syria plan between the US and Russia late on Friday, which they said the Syrian government of Bashar al-Assad had agreed to.

The agreement seems to have the main ingredients I talked about last Saturday:

3. Russia will also stop its bombing campaign on all groups except Daesh (ISIS, ISIL)

4. Once these steps have been taken, the US will join Russia in bombing positions of the Army of Syrian Conquest (Jabhat al-Nusra), whose leader is loyal to al-Qaeda

What is now elaborated and a little unexpected is that if the agreement holds for a week, the US has agreed to establish a joint Air Force operations center to coordinate air strikes on Daesh (ISIS, ISIL) and on al-Qaeda in Syria (the Army of Syrian Conquest [ASC] or the Nusra Front).

As I noted last Saturday, a lot of officers in the US military do not like the idea at all of coordinating with Russia, and feel that Russia has taken advantage of past ceasefires to advance its interests and those of al-Assad on the ground.

Air Force Chief of Staff General David L. Goldfein has complained bitterly that Russian pilots in Syria have been reckless and endangered the American pilots. But Gen. Goldfein is just going to have to spend some time doing joint planning with the commander of Russian Aerospace Forces, Colonel General Viktor Bondarev.

With regard to broken ceasefires, to be fair, Russia holds that US-backed fundamentalist guerrilla groups have often broken past cease-fires and actually joined in with al-Qaeda to attack Russia and its allies and to grab up new territory.

One implication of the agreement is that the 30 or so CIA-vetted rebel groups, mostly Muslim Brotherhood, to which the US has funneled money and arms through Saudi Arabia, are being forced to break their alliance of convenience with Abu Muhammad al-Julani, who has pledged allegiance to 9/11 mastermind Ayman al-Zawahiri, and who leads ASC/ Nusra. Since both Russia and the US will be bombing the positions of al-Julani’s ASC/ Nusra Front, the remnants of the Free Syrian Army and other rebel groups such as

If the rebels keep their battlefield alliance with it, they’ll be bombed alongside the al-Qaeda affiliate.

(Why the US is supporting allies, even allies of convenience, of al-Qaeda 15 years after 9/11 I’ll never understand; apparently you’d have to ask John Brennan at the CIA).

In return for joint US-Russian air action against Daesh and al-Qaeda, Russia agreed to a kind of no-fly zone in Syria– there are areas of Russo-American air dominance where the Syrian regime’s planes will not be allowed to fly. Hence Damascus won’t be able to send down barrel bombs on rebel-held areas at will anymore.

Moreover, the regime will have to let food and supplies into besieged urban quarters. Al-Assad and his henchmen have been starving rebel groups out and forcing them to relocate.