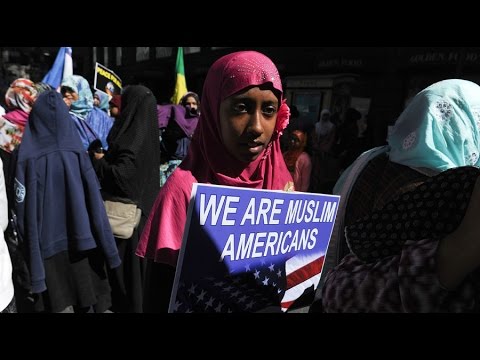 The de facto criminalization of being Muslim or speaking Arabic, which is contrary to every core American value and contradicts the First Amendment, is proceeding apace. The number of anti-Muslim attacks in the US is up by 80% since Donald Trump announced his proposed Muslim ban last fall. The article just linked to concerns a Muslim man who was sitting in a parked care in Washington DC when a passer-by threw a fire-bomb into it and said, “Take that, Muslim!” The victim is in hospital.

In early September, a 32-year-old Brooklyn woman punched, kicked and tried to rip the veils off two Muslim women pushing baby carriages. She shrieked, “This is the United States of America, you’re not supposed to be different from us … You don’t belong here!”

Then in mid-September, a man came up to a traditionally-dressed Muslim woman in a department store in New York city, and used his lighter to set her blouse on fire. She didn’t notice him at first but felt the heat and patted out the fire.

Two veiled Muslim women were kicked off a Jet Blue flight by a flight attendant who said she did not like the way the women were “staring” at her. The airline maintained that the real reason the passengers were removed was that they had filmed the “sensitive in-flight activities.” If airlines are going to make it illegal to take phone videos of one’s flight, which lots of tourists and first-time flyers do, then they have to announce that policy beforehand.

A young UC Berkeley graduate was kicked off a Southwest Airlines plane at LAX for making a quick pre-take-off call to his uncle in Baghdad, at the end of which he used the phrase “inshallah” or “God willing” in Arabic. The young man said he had lived under Saddam Hussein in Iraq and recognized discrimination when he saw it. I guess he’s liberated, now.

Something like 400 million people in the world speak Arabic at home, and it is a liturgical language for 1.6 billion Muslims. It is spoken also by Lebanese and Egyptian Christians and by Moroccan and Tunisian Jews.

It is worth explaining “inshallah.” It is the same as in Christianity. Consider James 4 from the New Testament:

“13 Come now, you who say, “Today or tomorrow we will go to such and such a town and spend a year there, doing business and making money.” 14 Yet you do not even know what tomorrow will bring. What is your life? For you are a mist that appears for a little while and then vanishes. 15 Instead you ought to say, “If the Lord wishes [Ean ho Kyrios thelēsē], we will live and do this or that.” 16 As it is, you boast in your arrogance; all such boasting is evil. 17 Anyone, then, who knows the right thing to do and fails to do it, commits sin.”

Muslims feel just as the apostle James did, that you shouldn’t be overly proud and make plans for the morrow when we are mortal. There is an Omar Khayyam poem in which he says we don’t even know if we will live to expel the breath we just took in. So to mark that humility before God, Christians say about the future, “God willing.” And Muslims say the same thing, “inshallah.” In fact the sentiment behind the word is contrary to the attitude of terrorists from any religion, who try to take destiny in their own hands.

In September, a Trump-inspired felon allegedly set fire to and destroyed a prominent mosque about an hour’s drive north of West Palm Beach. His slogan? All Muslims are radical. Not even professional Islamophobes would say that. There is a long history of white supremacists destroying Black churches. The mosques have joined that fate.

If you follow all these disturbing incidents around the country, it is extremely alarming and shows the United States going in a very disturbing direction. Muslims comprise about 1% of the US population, about 3 million people. 99.999% of them are law-abiding, kind and generous citizens. A significant proportion of our physicians are Muslim. Only 100 Americans have died in terrorist attacks done by people of Muslim background in the past decade, and most of those were in the Orlando nightclub attack, which surely was more about conflicted gay identity than Muslim radicalism. You can’t criminalize 3 million people over the actions of a tiny fringe. At a time when the Alt-Right is boasting of being a Trump constituency, it should be remembered that the white far right kills far more Americans in terrorist attacks, but no one discriminates against white people on that basis.