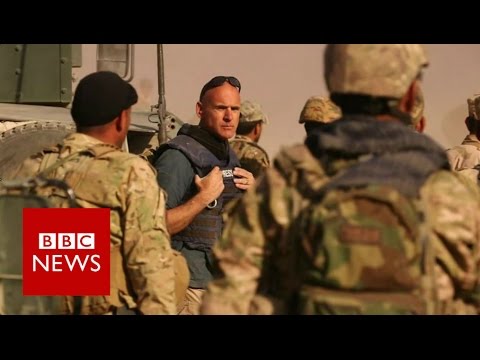 AFP is reporting that a news agency linked to Daesh (ISIS, ISIL), “A`maq,” is carrying a video of a Daesh fighter who swears that he and his colleagues will inflict a decisive defeat on the US in Iraq, as the guerrillas spread through the streets of the city. He addresses the camera saying, “As for you, America, we promise you that which our honored elders promised you, God bless them, such as Abu Mus`ab (al-Zarqawi) and Abu `Umar and Abu Hamza [etc.].”

The threats don’t make any sense. The US does not have infantry combat troops at the front lines, and is mainly intervening with fighter jets and bombers. If you are a small guerrilla group, you really cannot match that firepower. There is no obvious way in which Daesh could inflict harm on the US in Mosul.

Alarabiya reports that the Iraqi army on Tuesday entered the al-Hamdaniya district of Mosul, heading for the city’s downtown. The most difficult issue facing the advancing army is ensuring the safety of the some one million civilians trapped in the northern Iraqi metropolis.

In contrast, the Kurdistan Peshmerga or national guard for the Iraqi Kurdish superprovince took seven villages near Mosul. After that it got bogged down in the advance on Mosul from the northeast by Daesh booby-traps.

Alarabiya reports that the media-savvy Daesh has activated a cyber-army of keyboard supporters and social media fundamentalists to support the organization as the attack on Daesh proceeds.

This is so despite the Daesh cut-off of the internet and social media in Mosul itself. Daesh sympathizers are asking the organization’s acolytes on the internet to lend their support from the outside. Many anonymous accounts are representing themselves as inside Mosul, but these are for the most part lies. (The videotape discussed at the beginning of this piece likely is part of this propaganda message.)

Russia and Syria are afraid that the Iraqis will allow the militants to escape from Mosul to Raqqa, their Syrian capital, and so would reinforce the capabilities of Daesh in Syria. The Bashar al-Assad regime in Syria still dreams of reconquering all Syria, including Raqqa, and this development will make that pipe dream even more of a stretch.

On the road to Mosul with Iraqi forces – BBC News