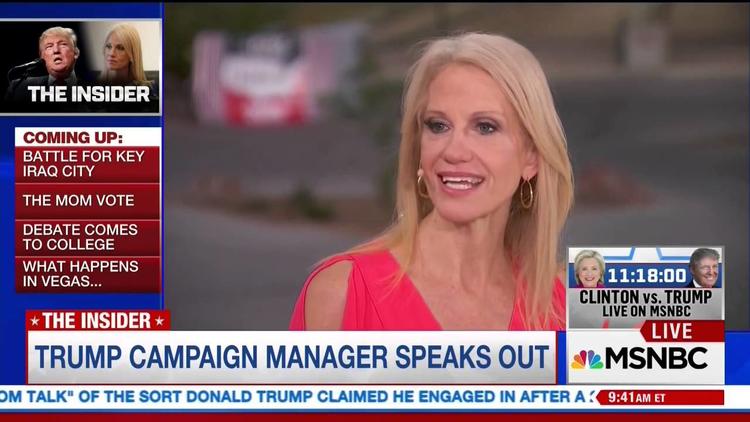 Donald J. Trump’s campaign manager, Kellyanne Conway, went on MSNBC touting the Republican candidate’s “5-point plan to defeat Islam.” She later clarified that she meant “radical Islamic terrorism.” But in fact her candidate has often spoken as Islam in general as his target, as when he said “Islam hates us.”

It is a little mysterious what Trump’s 5-point plan to defeat Islam might be. Here are some things he’s suggested, though, and many of these steps do concern all Muslims in a blanket fashion, not just radicals.

1. Ban Muslims from coming to the United States

3. Put all Muslims in a Federal database

4. Torture Muslims suspects; I mean, not just waterboarding, but really really torturing them.

These policies are unconstitutional. The First Amendment forbids the Federal government from establishing a state religion (despite the continued yearning of some Evangelicals for such an enforced theocracy). Discriminating against one religion is therefore illegal. Spying on Muslims not proven to have done something wrong is a violation of the Fourth Amendment. Torture is a violation of the 8th amendment and of the 5th amendment promise of due process. Kidnapping and threatening innocents isn’t just unconstitutional, it is a Federal crime.

Islamophobes in the US often hide behind weasel words like “radical Islamic terrorism” when they actually intend to target all Muslims. Besides, that phrase is clearly just propaganda, since it is redundant and hyperbolic. Could there be “moderate” terrorism? If not, then “radical” is superfluous. And the problem is Muslim terrorism, not “Islamic terrorism,” since Islam forbids terrorism. And if the problem is terrorism done by Muslims (defined as targeting civilians for violence in order to coerce public policy), then why is that so much worse than terrorism done by Christians, Jews, Buddhists or Hindus, or just by white supremacists (the main terrorism threat inside the United States)?

Conway’s “slip” was probably more revealing than she would have wanted it to be.

Since Americans are often insular and poorly informed by their ramshackle school system and shoddy mass media (and you have to wonder if the corporations like it that way), they may not realize that there are 1.6 billion Muslims in the world out of 7.4 billion human beings, i.e. about 1 in every 5 persons is Muslim. Only one in every 24 is an American. While the US is a rich and powerful country, it isn’t richer and more powerful than a fifth of humankind, and if those are the terms of struggle, then the US will lose.

But of course those aren’t the terms. Despite what many Republican politicians say, Muslims are mostly allies of the United States. Turkey is a NATO ally. Morocco, Egypt, Jordan, Bahrain, Pakistan and others are designated non-NATO allies.

But if people like Trump keep targeting ordinary Muslims as opposed to al-Qaeda and ISIL, then those alliances could easily shift way from the US.

As for Muslim radicalism, we didn’t hear much about it decades ago. You have to ask where it came from. Reagan stirred it up in Afghanistan to bother Moscow. And then Bush illegally invaded and occupied a major Arab Muslim nation, destabilizing it for the long term.

The best five point plan to defeat Muslim radicalism would be to stop using Muslim radicals (as the US is still doing in Syria) and to stop screwing Muslims over.

But those steps wouldn’t be the Trump Way.