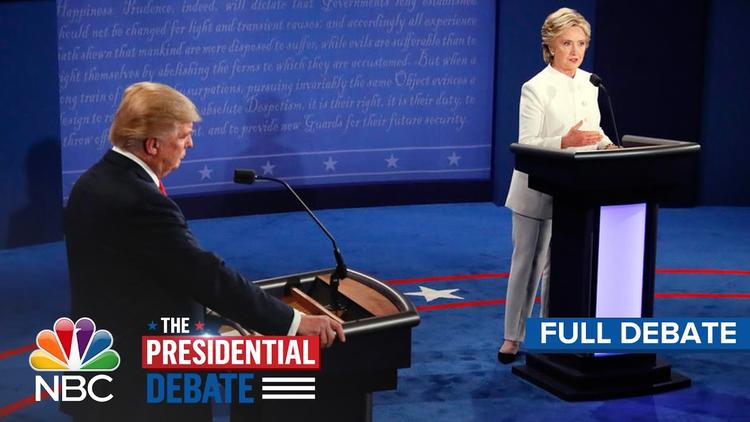 Some of the more extended comments on the Mosul campaign were those of Hillary Clinton. Here is Wallace’s question:

WALLACE: . . . let’s move on to the subject of foreign hot spots.

The Iraqi offensive to take back Mosul has begun. If they are successful in pushing ISIS out of that city and out of all of Iraq, the question then becomes, what happens the day after? And that’s something that whichever of you ends up — whoever of you ends up as president is going to have to confront.

Will you put U.S. troops into that vacuum to make sure that ISIS doesn’t come back or isn’t replaced by something even worse? Secretary Clinton, you go first in this segment. You have two minutes.

And here is her reply:

CLINTON: “Well, I am encouraged that there is an effort led by the Iraqi army, supported by Kurdish forces, and also given the help and advice from the number of special forces and other Americans on the ground. But I will not support putting American soldiers into Iraq as an occupying force. I don’t think that is in our interest, and I don’t think that would be smart to do. In fact, Chris, I think that would be a big red flag waving for ISIS to reconstitute itself.

The goal here is to take back Mosul. It’s going to be a hard fight. I’ve got no illusions about that. And then continue to press into Syria to begin to take back and move on Raqqa, which is the ISIS headquarters.

I am hopeful that the hard work that American military advisers have done will pay off and that we will see a real — a really successful military operation. But we know we’ve got lots of work to do. Syria will remain a hotbed of terrorism as long as the civil war, aided and abetted by the Iranians and the Russians, continue.

And I’m going to continue to push for a no-fly zone and safe havens within Syria not only to help protect the Syrians and prevent the constant outflow of refugees, but to, frankly, gain some leverage on both the Syrian government and the Russians so that perhaps we can have the kind of serious negotiation necessary to bring the conflict to an end and go forward on a political track.”

Juan Cole: Sec. Clinton pledges not to put US troops into Iraq “as an occupying force.” It just baffles me that she would say this. There is no prospect of the US occupying Iraq again. President Obama put 6,000 US troops, mainly trainers and special operations forces, into Iraq at the request of Prime Minister Haydar al-Abadi. The question is whether those troops will remain after Daesh (ISIS, ISIL) is rolled up as a territorial entity. She says that keeping US troops in Iraq would cause a revival of Daesh (because Iraqi nationalists wouldn’t put up with them), but it isn’t clear that she is saying that she won’t keep the 6,000 spec ops troops there. The “occupying” adjective muddies the waters because it is such a strange concept at this juncture.

Her notion of an “intelligence surge” isn’t clear. Will she spy on Daesh? But there is no internet in Mosul, so cyber-espionage can’t be carried out there. Does it mean she’ll spy on US residents?

This thing about denying the right to purchase firearms to people on the no fly list is so distressing. There are some 47,000 people on the no fly list, and I think it is unconstitutional. If they are guilty of a crime, then they should be prosecuted. If they aren’t, they they should be free. Where in the constitution does it say that the executive can prevent people from traveling? People are frequently placed on the list by accident, or out of vindictiveness (some are peace activists). Senator Ted Kennedy ended up on it. The no fly list is way too vague and un-transparent to form a basis for depriving people of other rights.

Clinton’s ‘no fly zone’ in Syria might have made sense in 2013. But Russia is now in Syria and controls its air space, and Russia has nuclear weapons. There is no way to do it now.

Wallace followed up on this point. Clinton replied that she would negotiate the no fly zone with the Russians and the Syrians. But there is no prospect that they would agree to any such thing, and Syria is now a Russian sphere of interest.

Why keep hitting this point when it is impractical and has been made irrelevant by developments on the ground?

Clinton was secretary of state, so why is she so flat-footed on these foreign policy issues? Why even bring up occupying Iraq? Why suggest a no fly zone in Syria that can’t be implemented. It is baffling.

Of course, Trump makes much less sense and commits much bigger howlers.

“WALLACE: Let’s turn to Aleppo. Mr. Trump, in the last debate, you were both asked about the situation in the Syrian city of Aleppo. And I want to follow up on that, because you said several things in that debate which were not true, sir. You said that Aleppo has basically fallen. In fact, there — in fact, there are… TRUMP: It’s a catastrophe. I mean…

WALLACE: It’s a catastrophe, but there…

WALLACE: There are a quarter of…

TRUMP: Have you seen what’s happening to Aleppo?

WALLACE: Sir, if I may finish my question…

TRUMP: OK, so it hasn’t fallen. Take a look at it.

WALLACE: Well, there are a quarter of a million people still living there and being slaughtered.

TRUMP: That’s right. And they are being slaughtered…

TRUMP: … because of bad decisions.

TRUMP: Well, Aleppo is a disaster. It’s a humanitarian nightmare. But it has fallen from the — from any standpoint. I mean, what do you need, a signed document? Take a look at Aleppo. It is so sad when you see what’s happened.

And a lot of this is because of Hillary Clinton, because what’s happened is, by fighting Assad, who turned out to be a lot tougher than she thought, and now she’s going to say, oh, he loves Assad, she’s — he’s just much tougher and much smarter than her and Obama. And everyone thought he was gone two years ago, three years ago. He — he aligned with Russia.

Now they have — he has aligned with Russia and with Iran. They don’t want ISIS, but they have other things, because we’re backing — we’re backing rebels. We don’t know who the rebels are. We’re giving them lots of money, lots of everything. We don’t know who the rebels are. And when and if — and it’s not going to happen, because you have Russia and you have Iran now. But if they ever did overthrow Assad, you might end up with — as bad as Assad is, and he’s a bad guy, but you may very well end up with worse than Assad.

If she did nothing, we’d be in much better shape. And this is what’s caused the great migration, where she’s taking in tens of thousands of Syrian refugees, who probably in many cases — not probably, who are definitely…”

Juan Cole: So Trump doesn’t know whether Aleppo has fallen or not. (Chris Wallace also seems not to know that West Aleppo has some 1 million people and is under regime control, and that it is rebel-held East Aleppo that is being bombarded by Damascus and Moscow).

Trump clearly supports the Russian plan to keep Bashar al-Assad in power by main force. He characterizes the Syrian dictator Bashar al-Assad as wily and strong and as having outmaneuvered Clinton. He says that if al-Assad were overthrown, a fundamentalist Muslim government would come to power and would be much worse than al-Assad. If Clinton gives insufficient thought to what would come after al-Assad if she overthrows him, Trump gives insufficient thought to the ways in which al-Assad is himself a standing provocation for the rebels, since he stands for discrimination and massacre and censorship and a police state. Trump never met a strongman he didn’t like.

But despite Trump’s isolationism, he occasionally switches around and becomes an imperialist, as when he called last March for 20,000 to 30,000 US troops in Syria to fight Daesh.

Trump also called the 12,000 Syrian refugees being admitted to the US this year a “trojan horse” and called substantial numbers of them ISIL. Actually, many of them have run away from ISIL, and of 750,000 refugees admitted by the US in the past decade, only 10 have had anything at all to do with terrorism. Trump’s virulent hatred of foreigners is shocking and fascist in it contours.

Trump’s insistence that the Mosul campaign should have been a sneak attack does not reckon with the some one million innocent civilians there, which the US is encouraging to leave by making this announcement.