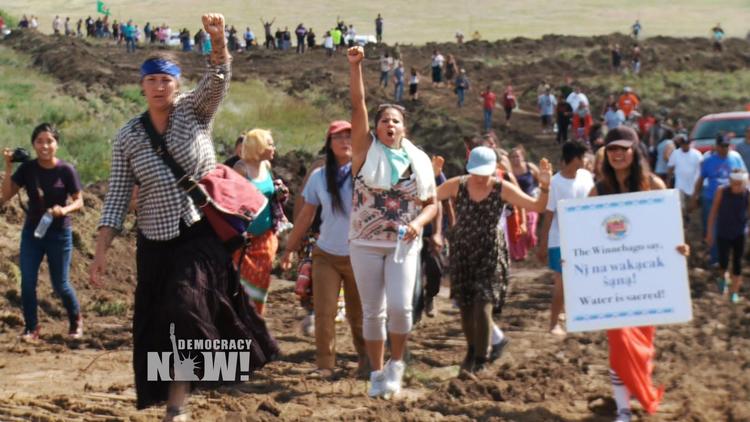 A state prosecutor had sought to charge Goodman with participating in a “riot” for filming an attack on protesters.

“This is a complete vindication of my right as a journalist to cover the attack on the protesters, and of the public’s right to know what is happening with the Dakota Access pipeline,” Goodman said in a statement on the website of Democracy Now!.

“We will continue to report on this epic struggle of Native Americans and their non-Native allies taking on the fossil fuel industry and an increasingly militarized police in this time when climate change threatens the planet.”

A North Dakota state prosecutor Ladd R. Erickson had sought to charge Goodman with participating in a “riot” for filming an attack on protesters after the prosecutor dropped criminal trespassing charges.

On Monday, District Judge John Grinsteiner found there was no probable cause in the charge against the Democracy Now! journalist.

Actress Shailene Woodley and Green Party presidential candidate Jill Stein are other well-known figures who have been arrested for their protests over the US$3.7 billion project.

The pipeline is expected to transport over half a million barrels of oil a day through federal and private lands in North Dakota, South Dakota, Iowa, and Illinois.

Indigenous and environmental activists say the project will ruin sacred burial grounds and pollute local water supplies. While construction has been stopped along small sections, protesters have vowed to continue fighting the project until it is fully shut down.

Goodman said that the charges were changed because authorities realized they couldn’t make the trespassing “stick.”

“I wasn’t trespassing, I wasn’t engaging in a riot, I was doing my job as a journalist by covering a violent attack on Native American protesters,” said Goodman.

Goodman said she and her production team filmed live video of “the Dakota Access Pipeline Company’s security guards physically assaulting non-violent, mostly Native American land protectors, pepper spraying them and unleashing attack dogs, one of which was shown with blood dripping from its nose and mouth.”