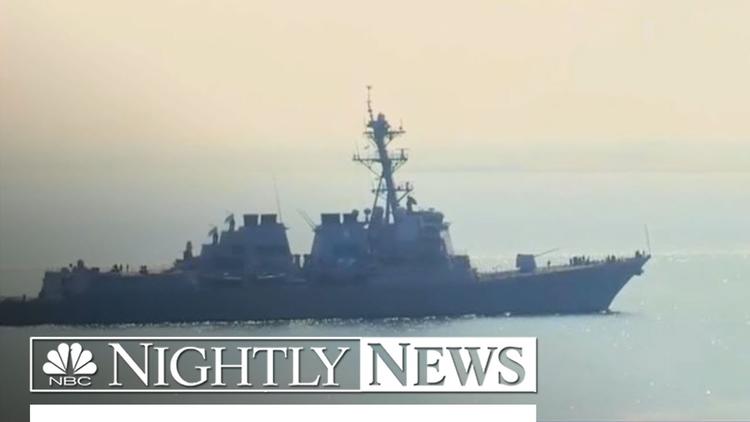 The US Navy in the Red Sea fired Tomahawk missiles into Yemen early Thursday morning, taking out three radar stations. Those facilities had allowed the Houthi rebels who control North Yemen to target US destroyers in the Red Sea on several occasions in recent days (they missed each time).

The Obama administration has backed the Saudi-led war on the Houthi government of north Yemen since it began in March of 2015, offering logistical support and even help in choosing targets for airstrikes. Presumably the Houthis were firing at US destroyers in an attempt to take revenge on the US for its involvement in the war on them.

The US Navy said that the Tomahawk missile strikes were defensive, without noting that the US has been deeply involved in helping plan the bombing of Yemen for a year and a half.

Last Saturday a Saudi airstrike hit a funeral, killing some 160 civilians and wounding over 500.

The Saudis and their partners in the war have often bombed urban areas indiscriminately, destroying some of historic downtown Sanaa. Even when advised by the US military against striking some bridges and other key infrastructure (because they are needed to get staples to civilian populations), the Saudis and their allies have nevertheless struck them. The US has on several occasions announced that it is becoming uncomfortable with the war on Yemen, but continues to be deeply involved behind the scenes.

The war has killed 4,125 civilians and left 7,207 wounded, and made over a million Yemenis out of 24 million food insecure.

The US is concerned with Yemen for geostrategic reasons, since about 10 percent of world trade goes through the Red Sea and the Suez Canal, and Yemen is in a position to disrupt that ship traffic. Also, some southern provinces of Yemen are bases for the radical al-Qaeda in the Arabian Peninsula, which is stalking the United States. (The Houthi Shiites hate al-Qaeda, and so could potentially be allies for the US against it. The Saudis have not seemed overly concerned with taking out AQAP, putting all their efforts into rolling back the Houthis instead. This course of action has left the US less secure).

Yemen joined in the revolutions of 2011 and by January of 2012 the president for life, Ali Abdullah Saleh, was forced to step down. In February of 2012, there was a nationwide referendum in which 80% of voters cast their ballots in favor of Abed Rabbo Mansour Hadi, Saleh’s vice president. Mansour Hadi formed a government of national unity and pursued a political settlement, involving a new constitution and elections for a permanent parliament. These arrangements were proceeding along, too slowly, but proceeding, in September of 2014 when the Houthis abruptly marched into the capital of Sanaa and staged a coup.

By January and February of 2015, Mansour Hadi and the rest of the UN-recognized government had to flee, and the Houthis took over entirely. They they fought their way down to Aden in the south and conquered it. (They’ve since been pushed back up to Taiz).

The Houthis derive from the Zaydi branch of Shiite Islam and are based in northern tribes of Saadeh. They formed a guerrilla movement to protest the increasing influence of Saudi Wahhabi Islam on Yemen, writing refutations of Wahhabi doctrine and practice and at some points vowing to see the Saudi royal family overthrown.

Saudi Arabia is enormously wealthy because of its oil, while Yemen is among the poorest countries in the world, so the Houthi animus toward an expansionist Wahhabism is a protest of the poor and not just theological.

The Saudis justify their intervention on the grounds that the Houthis are Shiites and allied with Iran. However, Zaydi Shiism has no ayatollahs and is in no particular like the Shiite Islam of Iran and and Iraq. There is no evidence of any significant Iranian support for the Houthis; perhaps Tehran sent them a few million dollars. The Houthis are an indigenous Yemeni movement. Houthi weaponry is largely American, looted from Yemen military storehouses after they took over. The Houthis are allied with the section of the Yemeni army still loyal to Ali Abdullah Saleh, the deposed dictator, who seems to be trying to use the Houthis to come back to power.

In my view, the Houthis were wrong to make a coup against the government in fall of 2014, and they have derailed the country’s political process. They have ruled in an authoritarian manner. But apparently the Saudi airstrikes have made them relatively popular with many people in Sanaa, and they are now seen as a national force (this was not true in 2014). In August hundreds of thousands came out for them in Sanaa.

On the other hand, the Saudis and their allies are wrong to have launched an air war on Yemen. For one thing, you can’t defeat a guerilla movement from the air. The Saudis and others are not committing ground troops in more than token numbers, and the Sunni Yemenis of the south and east are not motivated to fight into Zaydi North Yemen. But aside from the practicalities, the Saudi air force has hit Yemen so indiscriminately that it stands accused of war crimes.

My guess is that the Houthis and the Saudis will eventually find a political settlement (brave little Oman has been trying to negotiate one).

My advice to the Obama administration would be to dissociate itself from the Saudi war and to open its own lines of communication to the Houthis. Seeing the latter as Iranian proxies is a form of geopolitical paranoia, and failing to recognize that Wahhabi proselytizing is a cause of a lot of the problems in the Muslim world is shortsighted on the part of the US.

The Saudis want to install a government in Sanaa that is in their back pocket, just as they tried to buy the Egyptian government and just as they are backing Salafi Jihadis in hopes of taking over Syria. Saudi Arabia is a small country of some 20 million citizens with a small army but a well-equipped air force, and is trying to punch above its weight in seeking to establish hegemony over the Middle East.

For the US to back this dangerous adventurism is foolish, and this week’s events demonstrate that the Yemen misadventure could eventuate in yet another American war in the Middle East.