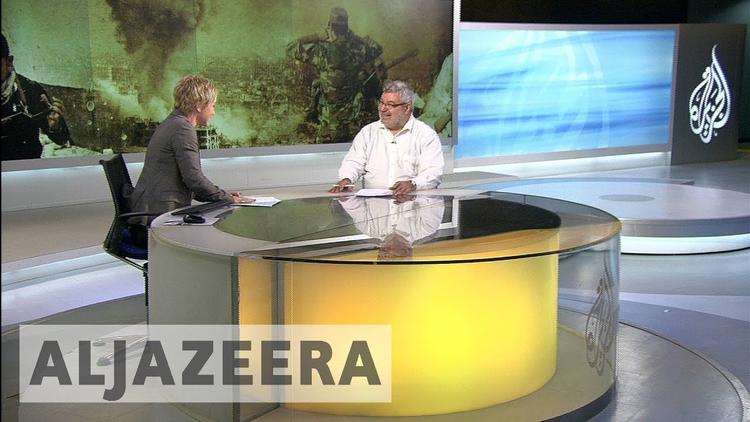 Albawaba has an interview with political scientist Khalid Rif`at of the Tayyiba Center for Political Studies, saying that the forced withdrawal of Daesh (ISIS, ISIL) from the town of Dabiq in northern Syria on Sunday under heavy Turkish army bombardment and in the face of advancing fighters of the Free Syrian Army has a religious symbolism that is fatal to the organization’s esprit de corps.

Retreating from Dabiq, he said, is considered a major defeat by Daesh fighters, since they were expecting to engage in an apocalyptic battle there at the end of time. This is despite the Daesh leadership’s attempts to play down the significance of the loss so as to quieten down the rank and file.

The battle was over in only 24 hours, even though it had been thought that Dabiq’s religious symbolism would cause the brutal guerrilla’s of the world’s most notorious terrorist organization to fight for every inch. The Syrian Observatory had been told by its sources on the ground that Daesh on Friday had sent 1200 reinforcements to the town from surrounding villages and from as far away as Homs, with the bulk of them being foreign fighters who had been assembled in the Daesh capital of Raqqa and then dispatched to defend Dabiq.

The real Daesh exper, Will McCants, explains that Abu Musab Zarqawi, the progenitor of Daesh, had found a medieval Muslim prophecy that 80 nations would gather at a meadow outside Dabiq to fight the Muslims, who would win and go on to conquer Constantinople. Daesh did not play up the prophecy till it took the town and much territory in eastern and northern Syria as well as northern Iraq in 2014.

Constantinople was called Rome or the New Rome by the Byzantines, and this diction was adopted in Arabic. But nowadays Constantinople is the largely Muslim city of Istanbul. So Daesh interprets the medieval apocalyptic saying as indicating that they will take the Rome in Italy and with it, Vatican City.

I find millenarian thinking in religious groups really interesting and have written a lot on the subject academically. But I also think that Daesh was really good at hyping its vision of armageddon and making itself seem way more important than it is.

Eric Hobsbawm argued that modern millenarian movements in places like Italy and Spain were forms of resistance in rural village settings to the onslaught of modern capitalism. He also noted that many of those small catholic sects ultimately tended to get absorbed into socialist parties in the 20th century.

Daesh not only was never likely to have anything to do with Rome (though it did set off a couple of bombs in Istanbul, harming hapless tourists), it wasn’t even likely to keep Dabiq or indeed to keep any of the territory it took.

Daesh’s apocalyptic dreams were always irrelevant except as propaganda. Daesh itself is largely irrelevant. It is a symptom, not a positive force in its own right (i.e. what the ancient Greek philosophers would have called an epiphenomenon).

The organization is symptomatic of state collapse in Iraq, Syria and to some extent Libya (though even fractured Libyan society was strong enough to root it out). That is, from the point of view of a social historian, the central character in the drama of Daesh is not Abu Bakr al-Baghdadi (the nom de guerre of the minor academic Ibrahim al-Samarra’i, who I don’t think could have gotten tenure in our Near Eastern Studies Department).

The central characters here are Syrian strongman and president for life Bashar al-Assad and George W. Bush and former Iraqi PM Nouri al-Maliki (in office 2006-2014). In turn they stand in for the social forces that have weakened the state in Syria and Iraq, from imperialism in Iraq’s case to seedy police state in Syria’s.

Police states pretend to be strong, but they are brittle and fragile. People in the west blame the Arabs for not accomplishing more democracy with the Arab Spring, but they misunderstood what the youth had wanted. They wanted an end to the police state. And they succeeded in Tunisia and Libya (though in the latter case at the cost of a fair amount of violence and social disruption, though I don’t know any Libyans who don’t think it was worth it). The police state saw them coming for it in Egypt, Bahrain and Syria and made countercoups (Egypt votes with Syria at the UN in recognition of this commonality). In Yemen the situation is too murky to describe easily, but the Houthi militia that took over the capital in fall of 2014 has police state tendencies. I can’t tell whether the Mansour Hadi government in Aden does as well, or not. Certainly the al-Qaeda pockets in Abyan and elsewhere do.

So Daesh was a side show, a sign that the Syrian and Iraqi states couldn’t get their act together and actually control their own territory. In part this failure derived from their unwillingness or inability to incorporate large swathes of their populations (in Syria, small town and small city rural areas were especially alienated, in Iraq it was more sectarian and regional– the Sunni Arabs of al-Anbar, Salahuddin, Ninewah and Diyala were not incorporated).

War is bloody and brutal, but it sometimes does have incorporating effects. The southern states were brought into a new relationship with Washington after the Civil War.

So the big story here in my view is that the Syrian and Iraqi governments have an opportunity, as Daesh is rolled up, to replace its fevered imaginings of global battle with a much more banal and mundane reality. In Iraq, the Baghdad government is trying to incorporate the Sunnis in a more meaningful way, though it isn’t clear it is succeeding In Syria, in contrast, Damascus has learned nothing from the civil war and just wants to crush the rebellion and return to the status quo ante (impossible given their moth-eaten army of at most 50,000, down from 300,000 before the civil war).

So despite the fall of Dabiq in Syria, I expect more long years of conflict, because Bashar al-Assad and the powerful regime figures around him are incapable of learning from history and incapable of genuine power-sharing.

I am not as pessimistic about Iraq, but a lot depends on how politically powerful the Shiite militias become and remain, since some of them are not about national reconciliation. In Iraq as well, a lot depends on whether the Sunni Arabs are capable of self-reflection and of seeing the mistakes they made in radicalizing and militarizing their relationship with the state. Some old Mosul bourgeois families even preferred Daesh rule to that of Baghdad, which is c-r-aazy.

The last 250 years have seen many millenarian movements who though the End is Nigh and who mobilized sometimes to fight outsiders. The Sudanese Mahdi in the 19th century started such a movement. There were lots in West Africa. Sayyid Ahmad Rai-Bareilly had those tendencies in mid-nineteenth-century India. All of them were crushed and few have much of a legacy. Epiphenomena.

The story here is still the story of the resilience of the state or the lack thereof. And that story is the one that will unfold in Iraq and Syria after Daesh has been demoted from caliphal state to small terrorist organization setting off pipe bombs in playgrounds.