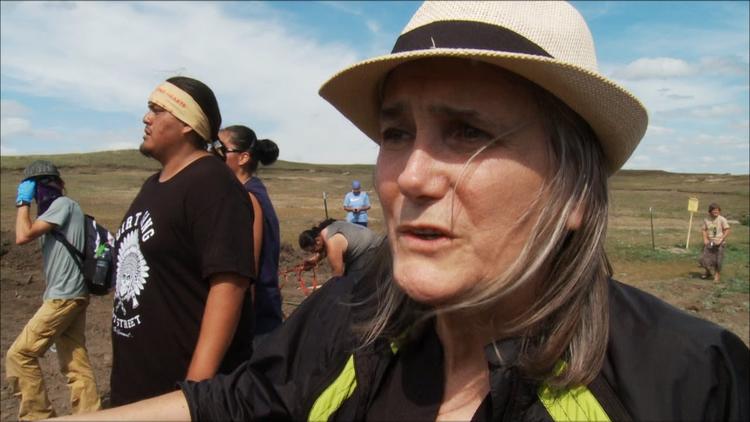 The Democracy Now! host said the charge is a “direct attack” on freedom of the press.

Journalist Amy Goodman says she will turn herself in next week to authorities to fight the charge of trespassing after filming a vicious dog attack on Dakota Access Pipeline protesters.

Goodman, who says she was simply doing her job, will turn herself in to Morton County–Mandan Combined Law Enforcement and Corrections Center on Oct. 17.

“I intend to vigorously fight the charge as I see it as a direct attack on the First Amendment: Freedom of the press and the public’s right to know, said Goodman on her program “Democracy Now!”

The award-winning journalist was arrested for trespassing last month while covering an attack by private security guards armed with attack dogs on Native American protesters at the Standing Rock Sioux camp.

Goodman and her production team filmed live video of “the Dakota Access Pipeline Company’s security guards physically assaulting non-violent, mostly native american land protectors, pepper spraying them and unleashing attack dogs, one of which was shown with blood dripping from its nose and mouth,” Goodman said on Democracy Now!

“Why are you letting her dogs go after the protestors?,” said Goodman, while covering the incident, interviewing a number of Native Americans who were attacked.The live video was viewed by more than 14 million people.

Green Party presidential candidate Jill Stein and actress Shailene Woodley are other well known figures who have been arrested for their protests over the US$3.7 billion project. The pipeline is expected to transport over half a million barrels of oil a day through federal and private lands in North Dakota, South Dakota, Iowa, and Illinois.

Indigenous and environmental activists say the project will ruin sacred burial grounds and pollute local water supplies. While construction has been stopped along small sections, protesters have vowed to continue fighting the project until it is fully shut down.

Police and private security have been more aggressively breaking up peaceful pipeline protests of late. Up to 21 people were arrested during a prayer service in late September with North Dakota police using shotguns, assault rifles and armored vehicles in the military style assault.

Democracy Now! “Journalist Amy Goodman to Turn Herself in to North Dakota Authorities”