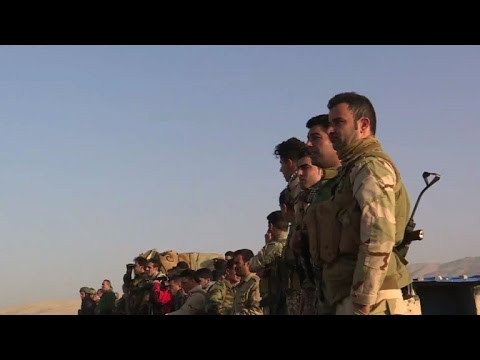 Baghdad and Iraqi Kurdistan have agreed where Kurdish military should fight. But, as commanders worry, there’s been no agreement as to how long Kurdish soldiers will stay after the Islamic State leave.

According to a statement from the Iraqi Kurdish government, around 35,000 of their men participated in the fighting to push the extremist Islamic State group out of Mosul earlier this week.

Their participation comes as a result of a prior agreement between the Iraqi Kurdish government – the northern region acts like a state within a state and has its own borders and military – and the central Iraqi government in Baghdad. The formulation of the agreement was overseen by members of the international coalition also present in Iraq, fighting the Islamic State, or IS, group.

“Even though ownership is disputed, there is no other military force but ours that can guarantee locals’ security.”

The agreement between Baghdad and Iraqi Kurdistan says that the Iraqi Kurdish forces should advance from Khazar, Bashiqa, Nawran and the Mosul dam area. These are located to the north and east of Mosul and most of the areas were also part of Iraq’s so-called “disputed areas” – that is, land that the Iraqi Kurdish government says should be part of their semi-autonomous region but which the Iraqi government also claims as part of Iraq proper. Before the Islamic State took control of the area in June 2014, Baghdad and Iraqi Kurdistan had been fighting over the land. An article of the Iraqi Constitution – Article 140 – was supposed to help resolve these issues but had never really been implemented.

No matter to whom the areas belonged, it is also true that the Iraqi Kurdish military were in charge of security in some of the areas inside Ninawa province before the arrival of the IS group. And despite the lack of any agreement on the disputed areas, both Kurdish and Sunni Muslim politicians worked together in local and provincial politics.

On the first day of the Mosul operation, the Iraqi Kurdish military advanced from the Khazar axis, east of the city, and regained control of nine villages. These villages were all in formerly disputed areas.

“In some places, Kurdish forces were able to reach positions that they used to control before the IS group came along,” Mohammed said. “In other places they went even further, beyond those borders. There needs to be an agreement on this issue in the future,” he stressed.

On the first day of the fighting there were ten deaths among the Iraqi Kurdish forces and 32 wounded. This kind of sacrifice is considered by many as a reason not to withdraw from the disputed areas.

The Iraqi Kurdish forces will now stay within their current lines and the Iraqi army and other local forces will advance into Mosul, Halo Penjweni, a senior member of one of Iraqi Kurdistan’s major political parties, the Patriotic Union of Kurdistan, who runs their office in Mosul and who is also coordinating military operations out of Khazar, told NIQASH.

“The areas we have liberated are Kurdish-controlled, disputed areas and there is no other military force that can guarantee locals’ security there,” Penjweni said.

One of Peshmerga leader explains attack plan for fighters – 17 Oct

Earlier this week, plans are explained to the Iraqi Kurdish military as to how they will participate in the fight for Mosul.

“Mosul after the IS group will not be the same as Mosul before the IS group,” he continued. “All things need to be re-evaluated. Unfortunately, there is no agreement between Iraqi Kurdistan and Baghdad on this issue and the presence of the Iraqi Kurdish military in these areas really needs to be sanctioned.”

Although trust has been established between Baghdad and Iraqi Kurdistan around the Mosul operations, the question of who is responsible for the security of various parts of the province will most likely cause conflict in the future, Watheq al-Hashimi, the director of the Iraqi Group for Strategic Studies based in Baghdad, says.

A political agreement is needed. Based on his sources in Baghdad, al-Hashimi says that he believes Iraqi Prime Minister Haider al-Abadi favours a return to the pre-June-2014 status quo in Ninawa. The oft-quoted idea that land that was gained by the spilling of Kurdish blood should remain in Kurdish hands, is not an option for Baghdad, al-Hashimi suggests.

Most Iraqis and Kurds believe that the post-IS era in Ninawa is going to be fraught. Previously there were alliances between the neighbouring Kurdish authorities and Arab politicians, especially Atheel al-Nujaifi, the former governor of Ninawa, a Sunni Muslim. However, since the IS group took control, al-Nujaifi and his family have fallen out of favour with local voters – the most recent candidate for governor backed by the al-Nujaifi clan was not supported by any of Ninawa’s Arab politicians – and this has had an impact on Arab-Kurd relations in the area.

“There appear to be two relatively extreme options at the moment,” local Arab politician, Abdul-Rahman al-Luwaizi, told NIQASH. “The first option is to see Article 140 as having lost all validity. Some Sunni Arabs believe this. The second, more widely held by Kurds, is that the realities on the ground should be enforced. The presence of the Iraqi Kurdish military in these disputed areas will complicate matters and make it different to find a political compromise.”