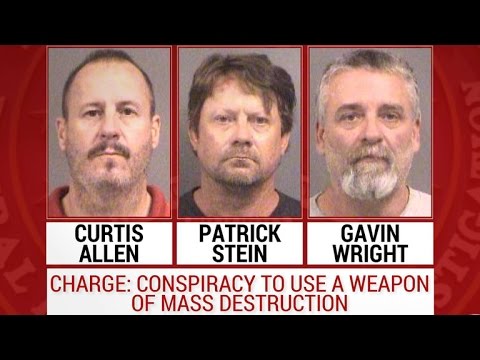 Tim Potter and Amy Renee Leiker of The Kansas City Star report that 3 southwest Kansas men were arrested Friday after an 8-month FBI investigation of their terrorist cell, the Crusaders.

Ultimately, they are said to have decided, however, to attack the Somali-Americans themselves by detonating explosives at an apartment complex in Garden City, KS. Their attack would, of course, have killed dozens of children, women and innocent men. It is interesting that they targeted the Somalis, presumably because the latter are both African and Muslim and so have two markers of identity for the white supremacists to hate.

They allegedly staked out the Somali-American neighborhood and engaged in highly obscene catcalls at the Muslim women (remind you of anyone?)

One thing to remember is that all Americans are immigrants, even if a little while back, and these residents of Garden City are hard-working Americans. One of the Somali-American women, toward whom those alleged terrorists had hurdled abuse, was profiled in the press recently:

““This is my home. I want to become American,” said Abshiro Warsame, a Somali woman who works the late shift at the nearby Tyson beef packing plant.” Warsame came to the U.S. seven years ago, after her husband was murdered. A U.S. flag hangs in her small, shared flat. She’s studying English and Spanish.”

But let me just underline another point. Like the Norwegian terrorist Anders Breivik, whose favorite reading was Islamophobes like Pamela Geller and Daniel Pipes, these creeps initially were apparently going to attack other white Americans with whom they disagreed.

They considered assassinating local public officials! That sounds like terrorism to me. In fact, since they clearly had a political motive in wanting to shape public policy, and since they clearly intended to harm innocent civilians and even local or state officials, they fit the textbook definition of terrorism. (They weren’t charged with terrorism, because the law is written to make it hard to lay that charge against domestic terrorists; but they were charged with intent to use a weapon of mass destruction).

They considered blowing up a Sunday church service of white Christians who were following Jesus’ teachings, e.g. Matthew 25:

41 . . . ‘Then he will say to those at his left hand, ‘You that are accursed, depart from me into the eternal fire prepared for the devil and his angels; 42 for I was hungry and you gave me no food, I was thirsty and you gave me nothing to drink, 43 I was a stranger and you did not welcome me, naked and you did not give me clothing, sick and in prison and you did not visit me.’ 44 Then they also will answer, ‘Lord, when was it that we saw you hungry or thirsty or a stranger or naked or sick or in prison, and did not take care of you?’ 45 Then he will answer them, ‘Truly I tell you, just as you did not do it to one of the least of these, you did not do it to me.’ 46 And these will go away into eternal punishment, but the righteous into eternal life.”’

What with being a hate group and all, I guess they skimmed over that passage.

The FBI was forced to move on them because one of the three broke up with his girlfriend and she went to local police with her concerns about her former boyfriend’s extracurricular activities. Of course, we don’t know full details, but if she had kept her suspicions to herself as long as he was a meal ticket, and only contacted the authorities after he kicked her out, that is pretty disturbing.

The Kansas City Star notes that there were 794 hate groups in spring of 2015 that operated across the US. In the past 18 months that number has risen to 892, an 11% increase.

Gee, I wonder who has been spewing racist hate for the past 18 months that might have encouraged these groups to expand and become more active?

While we had hate groups and attempted bombings in the past, Donald J. Trump’s encouragement of them and his unsubtle cues about which groups they should be terrorizing, has almost certainly made the problem worse.

That’s right. I’m saying Trump’s call to prevent Muslims from coming to the US or his tagging of Latinos as a criminal element function to single them out for violence at the hands of the white extremists. Trump is a more subtle and canny Anwar al-Awlaki of the American far right.

Of course we will be spared all the cliches about terrorism in the case of these men, since although they are terrorists if what is alleged of them is true, they are white. So no one will ask if they are self-radicalized, or if they were influenced by radicals when they visited home, and no one will suggest that their family members should be watched closely or expelled from the United States.

All this is so despite the fact that since 2002, white extremists have killed more Americans than foreign terrorists.

And here is the FBI news conference: