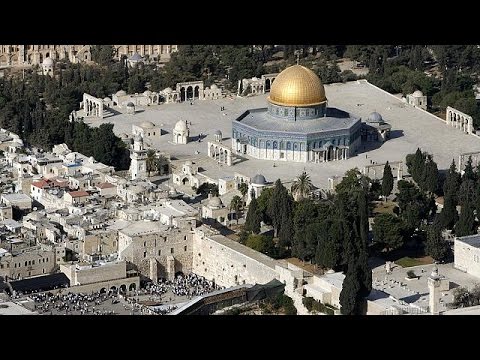 BETHLEHEM (Ma’an) — Following a controversial UNESCO vote that saw the adoption of a draft resolution that sharply criticized Israeli policies around the Al-Aqsa Mosque, while supposedly rejecting Jewish ties to the holy site — referred to by Jews as the Temple Mount — was received warmly by the Palestinian Authority (PA)’s Ministry of Foreign Affairs in a statement released Thursday.

Meanwhile, the resolution also criticized Israeli policies at the Ibrahimi Mosque in the occupied West Bank city of Hebron, the Bilal ibn Rabah Mosque/Rachel’s Tomb in Bethlehem, and strongly condemned Israeli military campaigns in the besieged Gaza Strip, while urging an end to the near decade-long Israeli blockade on the Palestinian enclave.

The resolution was passed after 24 countries voted in its favor, six voted against, and 26 abstained from the vote, according to Israeli newspaper Haaretz.

While the resolution did not outrightly reject Jewish ties to the Al-Aqsa Mosque/Temple Mount, it was highly critical of Israeli policies in and around the site and Israeli attempts at changing the status quo, which prohibits Jewish worship at the site, and referred to the site only by its Islamic name “Al-Aqsa/Haram al-Sharif,” and did not mention the Jewish name “Temple Mount.”

However, the resolution did make clear that UNESCO recognizes the importance of the Old City of Jerusalem for the “three monotheistic religions” — Islam, Judaism, and Christianity — and highlighted the significance of the holy sites in Hebron and Bethlehem for all three religions.

The PA statement said that the decision to adopt the UNESCO resolution reflected the “continued commitment of the majority of member states to confront impunity and uphold the principles upon which UNESCO was founded.”

The statement continued to express the PA’s disappointment with several countries — mainly European — which had changed their votes that were initially in favor of the resolution, after what the statement referred to as Israel’s “PR bullying.”

“Rather than spending millions to spin its illegal colonization into normalcy and distort reality, Israel, the occupying power, must understand that the only way to be treated like a normal state is if it starts acting like one, by ending its occupation of Palestine and seizing its irresponsible and illegal actions in the occupied land of the State of Palestine, especially East Jerusalem,” the statement read.

The statement added that Palestinian activities at the UN and on the international level would not be “deterred by distortions and smear campaigns,” and would continue pressuring the international community to take responsibility and act on Israel’s violations of international law “which have continued with impunity for half a century.”

Spokesperson for the Palestinian Presidency Nabil Abu Rudeineh also released a statement Thursday responding to the UNESCO decision, saying that he hoped that the resolution would highlight that the United States should “revise its mistaken policies of encouraging the continued occupation of Palestinian lands,” while showing Israel the importance of ending its occupation of Palestine, including East Jerusalem, and to end its policies that “contribute to increasing tensions.”

“With this absurd decision, UNESCO lost the little legitimization it had left. But I believe that the historical truth is stronger and the truth will win” he

added.
However, the resolution mainly focused on Israeli policies around the holy site that UNESCO and rights groups have claimed increase tensions between Palestinian worshippers and Jewish visitors, while sparking fears in Palestinians that Israel could further deny their right to access Al-Aqsa. Netanyahu did not release a comment responding to any of the criticisms presented by the UNESCO resolution.
Later, on Friday, Israel suspended all cooperation with UNESCO in response to the resolution.
Israeli excavations in and around the Old City

The resolution also criticized Israel’s continued excavations around the holy site, saying that UNESCO “deeply deplores the failure of Israel, the occupying Power, to cease the persistent excavations and works in East Jerusalem particularly in and around the Old City.”

Some rights groups claim that these excavations often seek to promote Jewish heritage and attachment to the occupied city, while erasing Palestinian history, in order to promote claims of Jewish ownership and further displace Palestinians, particularly those living in neighborhoods around the Old City.

Israel frequently permits excavations and archaeological digs in occupied East Jerusalem, specifically around the Al-Aqsa mosque, that threaten the structural integrity of Palestinian homes and holy sites in the area. Palestinians have routinely reported their homes being damaged as a result of Israeli construction.

In the past, tunnels have partially collapsed and caused holes to open up above them, threatening Palestinian homes, roads, and a local mosque.

The right-wing settler organization Elad is behind much of the excavations in occupied East Jerusalem, as the group is one of the main financiers of the archeological digs around the Old City, and also runs the City of David National Park which was established to promote Jewish connection to Jerusalem, while neglecting Palestinian history. The park is the only tourist site in Israel run by a private organization, according to the Applied Research Institute – Jerusalem (ARIJ)

The Elad group is also a strong force in the Israeli settler movement in East Jerusalem, leading a takeover of 25 buildings in the neighborhood of Silwan last year, which constituted the largest incursion of Israeli settlers into a Palestinian neighborhood in the past 20 years, ARIJ reported.

The resolution strongly condemned Israeli settlers entering Al-Aqsa and praying in an attempt to challenge longstanding international agreements that prohibit Jewish worship at the site. The Israeli incursions routinely erupt into clashes with Palestinian worshipers who have long held fears that the Israeli government has sought to change the status quo at the site and further restrict Palestinian access.

Following Israel’s illegal annexation of East Jerusalem in 1967, Israel has maintained a compromise with the Islamic trust that controls the Al-Aqsa Mosque compound to not allow non-Muslim prayer in the area. Jordan, which runs the Waqf organization administering the Al-Aqsa Mosque compound, has custodianship rights over Muslim holy places in Jerusalem under its 1994 peace treaty with Israel.

Israeli forces regularly escort Jewish visitors to the site, however, leading to tension with Palestinian worshipers and residents of the area.

Tensions around the Al-Aqsa Mosque compound were a main contributor to the unrest that began last October, after right-wing Israelis made frequent visits to the site during a succession of Jewish holidays.

In the resolution, UNESCO “firmly deplored” the routine and continuous “storming of Al-Aqṣa Mosque by Israeli right-wing extremists and uniformed forces,” and urged Israel, as the occupying power to “take necessary measures to prevent provocative abuses that violate the sanctity and integrity of Al-Aqṣa Mosque.”

The resolution went on to “deeply decry” Israel’s treatment of Muslim worshippers at the site and the detention and injury of Jordanian Waqf employees, while condemning Israeli employee incursions into the holy compound, particularly “Israeli Antiquities” officials who frequently ban Waqf employees from accessing the site, while prohibiting much-needed renovations from being carried out.

Israel came under heavy criticism in the resolution for its deadly military campaigns on the small Palestinian territory. UNESCO said it “deplores the killing and injury of thousands of Palestinian civilians, including children, as well as the continuous negative impact in the fields of competence of UNESCO, the attacks on schools and other educational and cultural facilities, including breaches of inviolability of UNRWA schools.”

UNESCO also sharply criticized Israel’s near decade-long blockade of the coastal Palestinian enclave, which “harmfully affects the free and sustained movement of personnel and humanitarian relief items as well as the intolerable number of casualties among Palestinian children, the attacks on schools and other educational and cultural facilities and the denial of access to education.”

UNESCO went on to demand that Israel “immediately ease this blockade.”

A 51-day Israeli offensive in 2014, termed “Operation Protective Edge” by Israeli authorities, resulted in the killings of 1,462 Palestinian civilians, a third of whom were children, according to the United Nations.

The Gaza Strip has suffered under an Israeli military blockade since 2007, when Hamas became the de facto ruling party in the territory.

Residents of Gaza suffer from high unemployment and poverty rates, as well as the consequences of three devastating wars with Israel since 2008.
Residents have continued to experience trauma in their daily lives following the 2014 Israeli offensive, as reconstruction efforts have moved at a glacial pace and with some 75,000 Palestinians still displaced after losing their homes in 2014.

The UN has warned that the besieged Palestinian territory could become “uninhabitable” by 2020, as its 1.8 million residents remain in dire poverty due to the Israeli blockade that has crippled the economy.