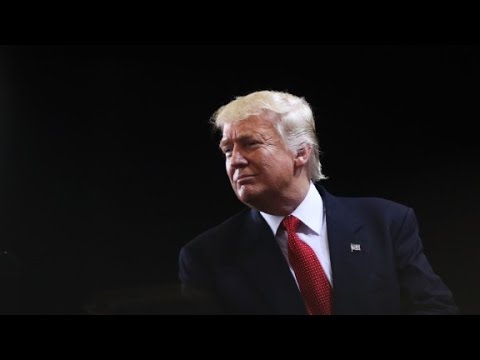 Donald J. Trump’s presidential campaign platform has from the beginning been based on racism, religious bigotry, class warfare of the rich on workers, hatred of women, and a whole series of other unacceptable and disgusting planks. Not since David Duke of the Ku Klux Klan ran for the senate in Louisiana in 1990 (and got 60% of the white vote) have we seen so extreme a candidate have such a good chance of winning national office. Yet despite Trump’s black soul (in the phrase of Khizr Khan), the polls in September had showed him competitive.

What in the world so degraded our politics such that a candidate as bad as Duke in most respects was not disavowed (as Duke was) by the Republican National Committee? That he was given thousands of hours of free airtime by cable news networks like CNN and MSNBC, who simply switched to his daily rallies as “breaking news,” in prime time! I can’t remember seeing them do that for a Hillary Clinton speech even once in prime time; maybe on a Saturday afternoon when no one is watching.

Obviously, the national kid gloves with which Trump has been treated didn’t come out of nowhere. The US political and information system was softened up for him over the past decade and a half. So here are some turning points that led us down this primrose path to the new American fascism.

1. The use of media by politicians to create an alternative reality. The Bush administration’s propaganda war on Iraq, which manufactured “weapons of mass destruction” that did not exist, was an important turning point. The United States had been involved in a lot of murky police actions and colonial small wars, don’t misunderstand me. But at least in the Korean and Vietnam Wars, it came in on one side in what was essentially a civil war. The rights and wrongs of the entry into both of those wars (and we know that the pretext for escalation in Vietnam was fraudulent) can at least be debated. But in the case of the Iraq 2003, the United States simply launched a war of aggression with no semblance of international law or really even any casus belli at all. The president and his men wanted to do it, so they did. They pulled it off in part by feeding the pliant media a daily diet of propaganda and falsehoods. They hinted around that then Iraqi dictator Saddam Hussein had been behind 9/11. They warned that he was two years from having a nuclear bomb. They went on television and said that had secret intelligence that the rest of us did not know about. They said they knew exactly where the nuclear bomb making facilities were and where the biological and chemical weapons were stored. And virtually no one challenged them. MSNBC, i.e. NBC and Microsoft, actually fired Phil Donohue before the fact so he wouldn’t be in a position to cast doubts. It fired Ashley Banfield for complaining about the pressure to propagandize. Trump has trotted out a whole series of similar lies, from his allegation that the murder rate has risen astronomically to his equally false assertion that immigrants are disproportionately responsible for crime (they are actually unusually law abiding). Virtually all of the Bushies and the Neoconservatives have come out against Trump, but they paved the way for his technique of using the media to create an alternate universe for viewers that would allow him to launch assaults on other people.

2. Elevating terrorism above other crimes, to the status of existential threat. The Bush administration “war on terror[ism]” played on public fears to hype the threat of terrorism. It is one of President Obama’s failures that despite trying, he wasn’t able to change this meme. Americans are much more likely to fall down in the bathtub and break their necks, or to be hit by lightning, than they are to be caught up in a terrorist attack. And, the far right, which Trump coddles and whose dog whistles he cheerfully blows, is responsible for more terrorism than Muslims in the US. We have bankrupted ourselves spending money on wars and counter-terrorism, but when congress complains (I kid you not) if counter-terrorism officials focus in on white terrorism. Treating terrorism as a form of crime makes far more sense and would save us from actions that probably actually increase terrorism.

3. Islamophobia. Fox Cable News, the baby of billionaire and extremely corrupt press lord Rupert Murdoch, and run by serial sexual harasser Roger Ailes, spent tens of thousands of hours and tens of millions of dollars to promote hatred of Muslims. Their hypocrisy is obvious insofar as Alwaleed b. Talal, the Saudi billionaire, was a partner during much of this period. After 9/11, polls showed that 60% of Americans still thought well of Islam, which had been their ally against communism during the Cold War. The relentless bombardment of the airwaves by people hating on Muslims definitely moved the needle, and the series of wars Washington prosecuted fruitlessly didn’t help. They actually called Iraqi guerrillas who fought against an illegal foreign occupation of their country “terrorists,” so that they managed to create millions of terrorists that hadn’t been there before. Among those in this hall of shame we have to count comedian Bill Maher, the chief poster boy for being LEOM, “Liberal Except on Muslims.” Maher called on his audience to support Israel’s assault on little Lebanon in 2006. When the youth of the Arab world rose up against dictatorship, he quipped, “the Arabs are revolting.” He said that Jews and Buddhists are peaceful in a way Muslims are not. He falsely repeated the propaganda that “most” terrorists are Muslim. He was personally offensive to Rep. Keith Ellison (D-MN), taunting him, “are you going to cry?” Maher has had a lot of fun teasing Donald Trump, but he bears some responsibility for the widespread and disgusting acceptance of hatred of Muslims by so many in the American public.

4. Misogyny. Trump clearly devalues women. The American political right, which stopped the Equal Rights Amendment and makes fun of women’s issues and equates machismo with political success all laid the ground for his acceptance. The virtual repeal in most Red states of Roe v. Wade, taking away women’s control over their own bodies; the bold arguments on Fox for paying women less than men; the denigration of women politicians as shrill or incompetent– all of this discourse made it possible for Trump openly to say women-hating things and to face no particular public backlash. If Republicans captured by the Evangelical or Catholic right wing can keep introducing bills to make abortion illegal, then are they not saying what Trump said, that women should be punished for having one?

5. The replacement of television journalism with infotainment. I’m old enough to remember when ABC put their news operation in the entertainment division in the 1980s. In the old days, news was a loss leader and media executives didn’t expect to make money on it except maybe at the local level. It was expected that television journalists be careful with their facts and strive for impartiality. Obviously, no one can entirely escape their society or social class, etc., but professional ethics were high. I rush to say that there are still excellent journalists and commentators out there– Richard Engel, Ben Weedeman, and so many others. But they are often ill-served by their bosses. Once cable news and the networks decided to try to make money with news, they went to infotainment. I remember when CNN first started under Ted Turner and had real news. It distinguished itself with its Gulf War coverage. Then after a while it was sold to Time Warner, and propaganda for certain causes and against others began being highlighted. And then I turned it on one day and the headline, I kid you not, was that Britney Spears had gone clubbing without her underwear. Then the news was gradually banished to the ticker underneath, and inexpensive panel discussions were substituted for reportage. No one watching American television news and mainly getting information from it probably even knows there is a war going on in Yemen or what has been going on with the drug war in Mexico, or about the persecution by Burmese Buddhists of the Rohingya Muslims. Increasingly, what was onscreen was just a form of celebrity gossip. “The news” is what gets eyeballs and therefore sells toilet paper and tampons. The Yemen War won’t do that, so it isn’t news. But guess what gets eyeballs? Donald J. Trump. So American mass media just surrendered to him without a shot and how badly they have screwed us over is still not completely clear. I hope they sold a lot of toilet paper so at least it was worth it to them. But it has been pointed out that this media system we now have is actually a security threat, since it doesn’t inform the citizens of a democracy about pressing issues on which they have to vote, and isn’t acting as a sentinel in investigating potential threats. Some progressive billionaire needs to create a really big endowed news organization that could actually present news and which can’t be pushed around by the advertisers or special interests. (You’ll note you never hear labor unions mentioned).

6. Climate Change Denial. Exxon Mobile, the Koch brothers and other big Hydrocarbon interests have spent 20 years very successfully casting doubts in the minds of the public (and especially in those of politicians and other businesspeople) about the reality and danger of man-made climate change. People now think they can drive around their gasoline cars and burn coal for electricity (as at the Monroe plant in Michigan) and put billions of tons of dangerous CO2 into the atmosphere every year, and that won’t come back to bite them on the ass. Trump has campaigned on denial of science, and now the Koch brothers are upset and pulled back from the monster they helped create.

7. Racism. The US Republican Party is largely a party of white Protestants, though about half of Catholics also vote for it. It has not succeeded in attracting minorities, and, indeed, by backing Trump may have chased away Asian-Americans and Latinos for the long term. Since the Nixon southern strategy, GOP politicians have increasingly used racist dog whistles. Reagan ran against welfare queens. Dan Quayle railed against a “cultural elite” (i.e. Jews in Hollywood). GOP congressmen attacked Latinos. Trump just ran with their discourse and outdid them. Republicans have gotten mad at me for pointing all this out, but it is time they instead engaged in some introspection and reconsidered racism as a platform for a major American political party. If the policy you’re running on produces a Trump, and threatens blood in the streets, wouldn’t it be better to forego political office?

There are lots of other culprits. You can make your own lists.

But basically what I am saying is, a lot of powerful Americans have a lot to be ashamed about.