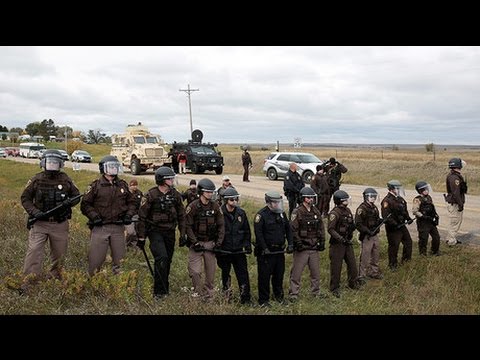 LONDON (IPS) – Many US citizens may instinctively believe they still live in the land of the free, but a new global rights rating system shows the country is far less tolerant than they may think.

The world’s first systematic review of how well countries uphold fundamental civic freedoms – to protest, organise and speak out – reveals a significant deterioration in the protection of these constitutional rights in the US.

From the streets to the internet, civic space is being contested and restricted, threatened by a new era of state authoritarianism. People of colour and social movements such as Black Lives Matter routinely experience first-hand police harassment and violence. Mass arrests, the use of excessive force, laws requiring prior authorisation for peaceful gatherings and undercover police infiltration of peaceful protests were once the preserve of authoritarian regimes, but these confrontational and brutalising tactics are increasingly being used by the state to suppress its own citizens.

The battle over the freedom of the internet is raging, spearheaded by the National Security Agency, arguably the world leader in collecting data on people’s private electronic communications. How free can expression be when we are wired into a Big Brother complex with such fearfully oppressive potential?

The US is not alone of course and there are dozens of countries around the world in which governments are cracking down even harder on protest, shutting down organisations on flimsy pretexts, and brutally silencing dissent by intimidating and murdering human rights defenders, lawyers and investigative journalists.

From the streets to the internet, civic space is being contested and restricted, threatened by a new era of state authoritarianism.

Rights violations in countries like Bahrain, China, Cuba, Ethiopia, Iran, North Korea and Saudi Arabia may be well known but the scale of the current global rights crisis is staggering.

The findings of the new CIVICUS Monitor conclude that over 3.2 billion people currently live in countries where civic space is repressed or closed. Most alarming is just how few countries are categorised as having open space – only 9 out of the 104 for which there is verified data.

In many mature, respected democracies like the US, Australia and Hungary, civic space faces a new wave of threats. Just last week, a senior United Nations official expressed concerns about Australia where a raft of new laws, as well as the public vilification of human rights defenders by senior government officials, is having a ‘chilling effect’ on civil society. From intensifying secrecy laws to a proliferation of anti-protest legislation, he cited a range of measures now combining to levy ‘enormous pressure’ on Australian civil society.

Europe may well be home to all nine of the countries categorised as ‘open’, but all is not well there either. Hungary, once the beacon of post-Cold War democratic hope, is now rated as having ‘obstructed’ civic space. Over the last year, the Hungarian government, finding their country at the centre of refugee flows into Europe from Syria and the north and horn of Africa, has installed a fence along Hungary’s southern border and introduced a raft of restrictive immigration and border control policies. NGOs critical of the government’s response have been threatened with de-registration and subjected to baseless legal and administrative investigations, while outspoken journalists have routinely faced criminal defamation charges brought by politicians.

If elite capture of politics is allowing for these abuses, it is the combination with deepening economic inequality that has driven citizen-led disruption right across the political spectrum. At one end, the radical mass movements of Occupy and the revolutionaries of the Arab Spring sought system change. At the other, anti-Establishment populism fuelled in different ways by the Trump insurgency and certain Brexit ‘leavers’, trails a rag bag alliance of right-wing nationalists peddling noxious, divisive narratives that seek to blame all of society’s ills on the mass arrival of displaced peoples into Europe.

Technology is catalysing these shifts in beliefs and nudging our voting habits. The mobilising advantage that Obama’s 2008 Presidential campaign created by building new tools to harness big data has become accessible to all, making mass organising easier than ever before. Yet despite all this data, pollsters are finding it harder to predict winners. In the recent UK and Colombian referendums, the polls got it wrong and even the day before America votes can anyone call the outcome of the Presidential race with certainty?

For some governments this messy, unpredictable democracy has triggered a seemingly irresistible authoritarian reflex. Fearful of their own people, many states are taking drastic measures to prevent their citizens from criticising authority or calling for their basic social and economic needs to met. From local campaigners to the big international NGOs, civil society actors are being vilified by governments accusing them of being the agents of foreign powers, intent on destabilising the very communities they are part of and whose rights they seek to protect.

We may at times mythologise freedom but it is a free, vibrant civil society that often holds back extremism, intolerance and exclusion. Restrictions stimulate the febrile conditions in which right-wing populism breeds and it is into this dangerous terrain that many of the world’s most mature democracies are heading.

Whoever becomes the next US President faces a critical choice between fully restoring the people’s civic freedoms or following a global trend that is undermining the legitimacy of our governments and damaging our democracies.

A healthy democracy is not just the absence of violations; it needs those in power to take proactive steps to safeguard citizen action, to tolerate dissent and to provide platforms for meaningful dialogue. Governments in the US and the world over need to stop fearing people power and instead nurture active citizenship.