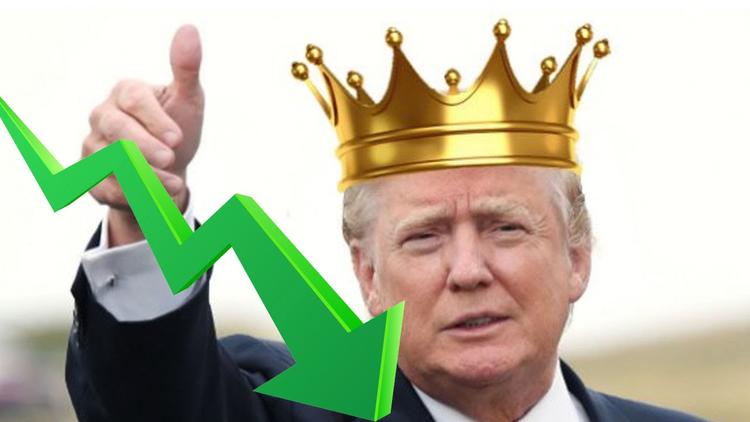 WASHINGTON, DC – With the United States’ presidential election on November 8, and a series of elections and other political decisions fast approaching in Europe, now is a good time to ask whether the global economy is in good enough shape to withstand another major negative shock. The answer, unfortunately, is that growth and employment around the world look fragile. A big adverse surprise – like the election of Donald Trump in the US – would likely cause the stock market to crash and plunge the world into recession.

There is always a great deal of insight in the International Monetary Fund’s semi-annual economic outlook, which is based on detailed data from around the world. And, because the latest version was published in early October, it is particularly relevant. (I was previously the IMF’s chief economist and oversaw the forecasting process, but I left that position in August 2008.)

Table 1.1 of the Fund’s World Economic Outlook covers the main points: a baseline forecast of 3.1% global GDP growth this year and 3.4% in 2017. This represented a nudge down from the projections in April, with signs of weakening perceived in the US, the eurozone, and of course the United Kingdom (grappling with the consequences of impending Brexit – the big and potentially traumatic step of leaving the European Union).

The most obvious dark cloud on the global horizon is Europe. The British issues are not helping, but the deeper issues continue to be related to the eurozone itself (Britain never adopted the euro). The headline growth number in Spain is somewhat encouraging, continuing to show some rebound. But the ongoing gloom about Italy – the third-largest eurozone economy, growing at less than 1% per year – is a serious matter.

Compounding these macroeconomic issues is the continuing pressure on eurozone banks. These banks have never fully recovered from earlier losses, and their equity capital levels remain low relative to international competitors (like the US) and to what investors regard as reasonable.

The bigger problem remains uncertainty about who is on the hook if a bank’s losses imply potential insolvency. These banks are clearly too big to fail – no European government in its right mind would allow a default on bank debt. But there is no agreement on how to share bank losses across countries. Taken as a whole, the eurozone has enough fiscal capacity to stand behind its banks. But, unfortunately, doing so is still a country-by-country decision – the collective mechanisms for recapitalizing European banks remain partial and far too weak.

Compounding these difficulties, growth in middle-income emerging markets is not strong. Slower growth in these countries is reflected in lower projected imports and lower expected commodity prices, which will negatively affect countries that export raw materials and energy resources. The Nigerian economy, just to take one example, is expected to contract by 1.7% this year.

Growth in the US, as reported by the IMF, was 2.6% in 2015, and is forecast to slip to 1.6% this year before rebounding slightly to 2.2% in 2017. There has been a long steady recovery from the 2008 financial crisis, but the effects of that collapse still linger.

Trump promises to boost US growth immediately to 4-5%, but this is pure fantasy. It is far more likely that his anti-trade policies would cause a sharp slowdown, much like the British are experiencing.

In fact, the impact of a Trump victory on the US could well be worse. Whereas British Prime Minister Theresa May’s government wants to close the UK’s borders to immigrants from the EU, it does want trade with the world. Trump, on the other hand, is determined to curtail imports through a variety of policies, all of which are well within the power of a president. He would not need congressional approval to slam the brakes on the US economy.

< Even in the best of times, US policymakers often do not think enough about the impact of their actions on the rest of the world. Trump’s trade-led recession would tip Europe back into full-blown recession, which would likely precipitate a serious banking crisis. If this risk were not contained – and the probability of a European banking debacle is already disconcertingly high – there would be a further negative spiral. Either way, the effects on emerging markets and all lower-income countries would be dramatic.

Investors in the stock market currently regard a Trump presidency as a relatively low-probability development. But, while the precise consequences of bad policies are always hard to predict, if investors are wrong and Trump wins, we should expect a big markdown in expected future earnings for a wide range of stocks – and a likely crash in the broader market.

Simon Johnson, a former chief economist of the IMF, is a professor at MIT Sloan, a senior fellow at the Peterson Institute for International Economics, and co-founder of a leading economics blog, The Baseline Scenario. He is the co-author, with James Kwak, of White House Burning: The Founding Fathers, Our National Debt, and Why It Matters to You.

The Young Turks: ” Trump On Letting The Economy Collapse”