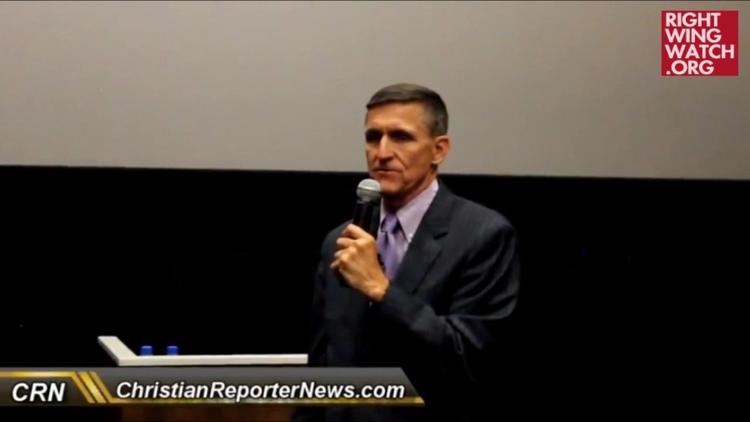 The new National Security Adviser to incoming President Donald J. Trump, Lt.-Gen. Michael Flynn, has called Islam a “cancer” and maintained that it is a “political ideology” masquerading as a religion. He made this generalization about the religion of 1.6 billion people out of the 7.4 billion humans on the planet, i.e. 21.6% of everyone alive. Moreover, because of high birth rates in Africa, South Asia and Southeast Asia, the proportion of the world that is Muslim will increase dramatically through the 21st century, so likely they will be a third of humankind.

Michael Flynn: Islam Is A ‘Cancer,’ ‘Political Ideology’ That ‘Hides Behind’ Religion

One of Flynn’s arguments is that Christians don’t kill people in the name of Christ. But of course they do. Christian president George W. Bush said God had made him president, and Bush told French president Jacques Chirac that he went to war in Iraq because Iraqis are the Gog and Magog of the Bible, barbarian hordes menacing Christendom. I wrote at the time of this revelation,

“a bewildered French President Jacques Chirac told a journalist in a book published this spring that Bush had tried to enlist him in the Iraq invasion one last time in February, 2003, by emphasizing that the threat of Gog and Magog had gathered in the Middle East against the West and only overthrowing Saddam would forestall a catastrophe of biblical proportions . . .

“Chirac called a Swiss theologian to have him explain what this Gog and Magog was whereof Bush spoke. Chirac complained that the problem with people in the Bush administration was that none of them knew anything about the really existing Arabs. Chirac reads Arabic, and he used to ask the Bush people he dealt with to name one Arab poet. None could. France has been directly involved in the Arab world since Bonaparte invaded Egypt in 1798, so French political leaders could only lament the earnest evangelical nonsense spewed by crazies who had taken over Washington.”

A majority of US air force pilots who bombed the bejesus out of Iraq for 8 years thought of themselves as Christian warriors putting down a Muslim horde, just as Bush did. Indeed, American evangelical militarism is well-documented by social scientists.

I’m not sure why it is worse for American Christians to kill Iraqi families from the skies than for Muslim fanatics to wield less high tech weapons.

I have also pointed out that the Christian “Lord’s Resistance Army in Uganda initiated hostilities that displaced two million people . . .”

As is common among these Washington gadflies with extreme views such as Flynn, he is not consistent. He seems to be in the back pocket of Turkish President Tayyip Erdogan , a big supporter of the Muslim Brotherhood and of Hamas in Gaza, and leader of a country of 75 million . . . Muslims. (There is nothing wrong with all this, it is just weird that Flynn supports Erdogan and Turkey’s pro-Muslim Justice and Development Party or AKP, while demeaning all Muslims as a “cancer” and denying they belong to a religion).

So is Islam a religion? I guess it would depend on how you define a religion and who gets to do the defining. Anthropologist Clifford Geertz put it this way:

“A religion is a system of symbols which acts to establish powerful, pervasive, and long-lasting moods in men by formulating conceptions of a general order of existence and clothing those conceptions with such an aura of factuality that the moods and motivations seem uniquely realistic.”

Islam would obviously fit this definition.

In American law and practice, it is the Internal Revenue Service that defines a group as a “church,” i.e. organized religion, because it has to determine whether groups are eligible for tax exemption. These are the criteria the IRS uses:

Again, Islam obviously meets these criteria, with a recognized creed (“there is no god but God and Muhammad is is prophet”), forms of worship (5 daily prayers, Friday communal prayers), forms of religious governance (mosque congregations), formal code of doctrine, distinct religious history (I have written a lot on this subject), clerical corps who undergo seminary training, literature of its own (Qur’an, hadith), mosques, regular religious services (communal prayers), and schooling for youngsters.

In fact I am not aware that the IRS ever had any question but what Islam is a religion (“church”) according to American law.

Not only is Islam a religion, but the US courts have even recognized Santeria as a religion, and overturned municipal statutes forbidding adherents from practicing animal sacrifice. Santeria is an assimilation of Yoruba religion to Roman Catholicism in the Caribbean, and if it is a religion in American law, then Islam certainly is.

Ironically, Flynn’s line on Muslims being a political movement rather than a religion is exactly the one the ayatollahs in Iran use to deny Baha’is their religious rights.

So everything Flynn said is false. Christians have made piles of bodies as high as mountains in committing violence against non-Christians, ever since they took over the Roman Empire. Islam is experienced as a moral and spiritual good by over a fifth of humankind, not as a cancer. Muslim radicals are a tiny fringe and not representative of the religion as a whole. And the religion is really a religion by any definition you would want to pick, not a political grouping.

You only hope that all these crackpots Trump is elevating to the highest offices in the land have been shining us on all these years with their lunatic theories and that once in power they’ll start acting like responsible adults.