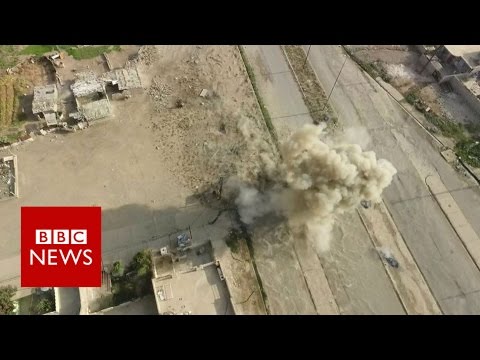 (Erbil) – A mass grave discovered near Mosul by Iraqi Security Forces on November 7, 2016, most likely contains the bodies of at least 300 former local police officers executed by the Islamic State, also known as ISIS.

Witnesses said that they believe that at the end of October, ISIS massacred several hundred former policemen they had been holding as prisoners. The bodies in the grave, 30 kilometers southeast of Mosul, appeared to be of men killed in custody.

“This is another piece of evidence of the horrific mass murder by ISIS of former law enforcement officers in and around Mosul,” said Joe Stork, deputy Middle East director at Human Rights Watch. “ISIS should be held accountable for these crimes against humanity.”

Human Rights Watch visited the site of the mass grave, around 50 by100 meters, on the outskirts of the village of Hammam al-Alil, on an Iraqi military training ground behind an agricultural college campus, on November 12. Researchers saw four exposed corpses, as well as piles of trash covering corpses. The area had a strong, foul smell.

Human Rights Watch reviewed the summary of a report of a governmental delegation from Baghdad who visited the site on November 9. It stated that the grave housed about 100 corpses, with at least 20 visible from the surface. It found, based on the visible corpses’ level of decomposition that the individuals had been killed within the previous three weeks. All the visible corpses had bound hands and ankles and were blindfolded.

“Ammar,” 31, a laborer from the village of Rasif, 15 kilometers south of Hammam al-Alil, and “Ahmed”, 28, a former policeman from the same village, told Human Rights Watch that on October 19, at a time when ISIS was fully in control of the village and neighboring towns and villages, fighters rounded up at least 2,000 people from the area and forced them to head north toward Mosul and Tel Afar. Most did not have cars so had to walk.

Ahmed said that the families walked four kilometers the first day, and spent the night in the village of Safiyah, with ISIS fighters forcing local people to host the families. The following morning, fighters called all the men and boys 15 and above to gather in the village. ISIS separated the former policemen, loaded them into vehicles, and drove them away – Ahmed said he heard they were taken to Hammam al-Alil. The remaining men, women, and children traveled to another 10 kilometers to Hammam al-Alil over the next two days by foot. Ahmed said he had escaped detection as a police officer by hiding in a villager’s home, and he subsequently joined the families.

On the night of October 28, at about 8 p.m., Ammar said, he saw ISIS fighters drive four large KIA trucks carrying a total of 100 to 125 men, some whom he recognized as former policemen, past the agricultural collage. Minutes later he heard automatic gunfire and cries of distress. The next night, he saw ISIS fighters bring the same four trucks, carrying between 130 and 145 men. Minutes later he again heard automatic gunfire and screams.

“Muhammad,” from Hammam al-Alil, said he and his family lived about 250 meters from the mass grave site. He told Human Rights Watch that for three nights in a row starting at about 10 p.m., he heard automatic gunfire for about seven minutes. Muhammad said that three ISIS fighters came to their home at about 5 a.m. on October 27, and took away his brother “Hamed,” a 33-year-old former policeman, saying they needed to interrogate him. Muhammad said he had not heard from his brother since. “Hassan,” 16, a student from Hammam al-Alil, lived next to the house ISIS fighters used as a makeshift prison to hold men from neighboring villages. He took Human Rights Watch researchers to the prison, which he said ISIS had opened in July. Around October 20, he said, ISIS starting bringing groups of about 30 new prisoners to the prison daily, and removing others already there. He said he recognized most of the men as former police from Hammam al-Alil and neighboring villages. On the night of October 28, he saw ISIS fighters load about 40 men into at least three trucks and drive off in the direction of the agricultural college. Then a few minutes later he heard gunfire. This continued for two more nights, he said.

Human Rights Watch spoke with five Hammam al-Alil police officers on November 3. They said that at 11 a.m. on October 20, an ISIS commander announced over the loudspeakers in three Hammam al-Alil neighborhoods ordering all men and boys over age 12 to gather at a nearby bridge. Worried that they might be targeted because of reports of ISIS rounding up security force members, these officers and at least 65 others escaped. They said they did not know what happened to the men who had been taken.

A local official told Human Rights Watch that ISIS had taken about 2,000 individuals north toward Mosul on that date. Iraqi Security Forces pushed ISIS out of the town after clashes on November 7.

Since the Mosul operation began, Human Rights Watch has documented ISIS forcibly evacuating civilians under their control with its fighters, apparently to use them as “human shields,” and executions of former Iraqi security forces. ISIS has also carried out at least three chemical attacks on civilians south of Mosul.

Widespread or systematic murder carried out by a state or organized group as part of an attack against a civilian population – as part of a policy to commit murder – constitutes a crime against humanity. The killing of prisoners, civilian or military, during an armed conflict constitutes a war crime.

Crimes against humanity and war crimes are prohibited under the International Criminal Court’s Rome Statute. But the court’s jurisdiction only applies to crimes committed in the territory of or by the nationals of countries that are parties to the Rome Statute, or to situations referred to the court by the UN Security Council. Iraq has not yet ratified the Rome Statute.

BBC News: “Inside the street battles for Mosul – BBC News”