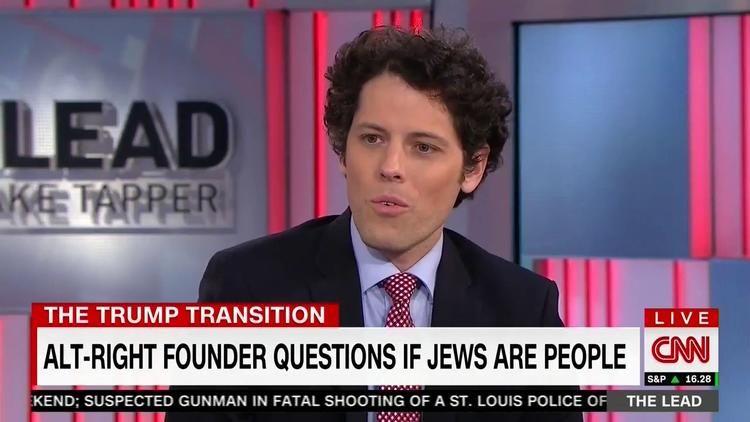 Richard Spencer is a rock star of the Neofascist movement that hides behind the euphemism “alt-right.” (Since they’re always going on about how manly white people are, why don’t they man up and admit their Nazism? Why hide behind weak tea like a keyboard pun?).

Trump’s new Goebbels, Steve Bannon, had turned Breitbart.com, he said, into an organ of the “alt-right,” i.e. of Neofascism, and Richard Spencer is the leader of the movement Bannon/ Trump have empowered.

On Saturday the Neofascists met at a restaurant in Washington, D.C., and Spencer gave an unhinged rant– I mean, “speech”– during which he denounced the “Lügenpresse,” a toxic German word. The “lying press” or “mendacious press” is not just an attack on journalists in the tradition of the German far right wing. Everyone understood that the term was racialized. Pure Germans did not write lying newspaper articles. Only Jews and mongrel leftist inferior Germans would do such a thing. This connotation of the word was very deep and preceded the rise of the National Socialists. But it was especially used by the Nazis to deflect criticism. Who could dissent from the dynamic march of Nazism but the lying Jewish press?

Thus, during the Spanish civil war the German air squadron, the Condor Legion, was loaned to Gen. Francisco Franco by Hitler. It bombarded the Basque town of Guernica in April of 1937, dropping 3,000 incendiary bombs on it. News of the atrocity provoked the horror of the outside world.

Among those deeply touched by the piles of scattered body parts was Pablo Picasso, whose masterpiece on the subject in turn caught the global imagination.

In response, the Nazi propaganda machine swung into action. There was no massacre from the air of Guernica. It was an ancient archeological site that had long been rubble. Allegations to the contrary were, you guessed it, dismissed as the work of the jüdische Lügenpresse, the mendacious Jewish press.

Richard Spencer last Sunday said the word lovingly, with a broad mischievous smile, looking for all the world like Hannibal Lecter in The Silence of the Lambs after a hearty meal of human and fava beans, drawing out the umlaut on the “u” . . . Lü. . . ü . . . ügenpresse. He knew exactly the Nazi dog whistle he was blowing, knew that he was using a highly racialized term.

Spencer complained of the “mainstream press” and the army of social media commentators who predicted the outcome of the election incorrectly, adding, “One wonders if these people are people at all, or instead soulless Golem.”

Right wing rags are defending Spencer, saying that he did not direct this last sentence at Jews. But of course he did. First of all, he had already identified the target of his ire as the Lügenpresse, which has heavy racial overtones– especially in the world of white supremacism in which Spencer operates. The second dog whistle is his use of the word golem, which derives from a Jewish fable about clay that is brought to life by magic. Then there were his hysterical shouts of Heil! at the end of his speech, which rather give the show away.

Spencer went on to say that the present United States had become “a sick, corrupted society.” He alleged, “America was, until this last generation, a white country designed for ourselves and our posterity . . . It is our creation, it is our inheritance and it belongs to us.” I somehow don’t think Spencer includes Arabs and Jews in the category of “white.” You even suspect you have a good idea who exactly he thinks corrupted American society.

Act two of this sordid tale, which deeply implicates Steve Bannon and Donald J. Trump, came on Monday on CNN when reporter Jim Sciutto asked a panel about Spencer’s speech, describing it as “hate-filled garbage against the Jews.”

Contemporary cable television news services have contracted with the Chyron company, which provides software that electronically generates captions in the bottom third of the screen as interviews are proceeding . These captions are called “chyrons” in the business.

Jewish viewers, who were under the firm impression that their membership in homo sapiens sapiens was uncontroversial, were shocked and horrified that this question was being posed on the small screen in bright letters, as were we other bona fide members of that genus and species. Maybe the Neanderthals of the Neofascist movement not so much.

I fear the condemnations issued by hard right pro-Netanyahu Jewish groups of Spencer’s ugly discourse will not carry much moral weight. They have squandered their credibility by crying “Antisemite” at people who care whether Palestinians are stateless, and by aligning with a Republican Party that has had its lips glued to the dog whistle for some decades. That Israeli cabinet members have stood up for Trump and Bannon further debases their coin. American Jews deserve to be represented by decent organizations who care as much about Palestinian rights as they do about those of Jews.

What happened was not Jim Sciutto’s fault– he was obviously deeply appalled by Spencer’s remarks. He was filling in for Jake Tapper, who is Jewish, so the awkwardness is, like, multidimensional. It was the gaffe of a robot, and of television producers who had automated chyron-generation.

But I’d like to point that this misstep of the chyron bot is simply symptomatic for CNN in its 2-year-long coverage of the presidential campaign. It almost nightly turned the airwaves over to Trump bloviating at his rallies and saying racist things. Moreover, its reporters have rushed to normalize Trumpism. The disgust and discomfort we all felt at seeing the Nazi chyron is not a new emotion. We had felt it when Mexicans were being excoriated as rapists and all Muslims as dangerous, and women were configured as undressed Barbie Dolls whose limbs and genitals are available for twisting.

The Nazi chyron, in short, is the perfect symbol of the complete pusillanimity and complicity of the corporate media in the dark side of the Trump phenomenon, which Steve Bannon has admitted has more in common with the planet-destroying Darth Vader than with George Washington and James Madison.