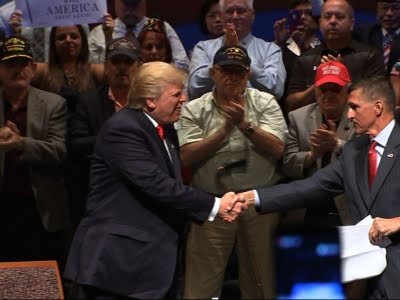 As former head of the Defense Intelligence Agency, Lt. Gen. Michael Flynn was “one of the most influential figures in the dramatic post-9/11 expansion of the role of U.S. Special Operations forces globally,” (Photo: Chip Somodevilla/Getty Images)

Amid the many rumored reports of President-elect Donald Trump’s likely cabinet picks, one name that has risen to the surface is seriously concerning observers of the foreign policy arena.

“A source familiar with the Trump transition says that all signs point to Lt. General Michael Flynn,” reported Kristen Welker, though “nothing is finalized.”

The powerful post, which does not require Senate confirmation, is currently held by Susan Rice under President Barack Obama and formerly by Condoleeza Rice under George W. Bush.

Welker noted that Flynn is a “controversial figure in his own right who has been known to eschew ‘political correctness’,” who, like most of the rumored appointees, is also a “Trump loyalist who stayed by the GOP candidate’s side even as other national security experts sharply criticized him during the campaign.”

Though Flynn is better known for his radical declarations against Islam—for instance, saying that he is “at war with” the religion, calling it a “cancer,” tweeting that “fear of Muslims is rational” (and writing a book to that effect), and insinuating that killing the families of suspected terrorists is acceptable—perhaps more concerning is his ambition to act on those beliefs.

As former head of the Defense Intelligence Agency, Flynn was “one of the most influential figures in the dramatic post-9/11 expansion of the role of U.S. Special Operations forces globally,” Intercept reporter Jeremy Scahill wrote in September.

Along with Gen. Stanley McChrystal and Adm. William McRaven, Flynn was the embodiment of Donald Rumsfeld’s view that the world is the battlefield. Flynn, who ran the elite Joint Special Operations Command’s intelligence operations, is still revered as a legend within the military intelligence world.

After 9/11, Flynn was on the knife’s edge of the intelligence technology that would be at the center of the mounting, global kill/capture campaign. In both Iraq and Afghanistan, Flynn and JSOC waged secret wars within the broader conventional wars and dramatically expanded the pace of night raids. Central to this strategy was taking prisoners and extracting information from them as quickly as possible.

The seriousness of his record prompted Lizz Winstead, co-creator of “The Daily Show,” to quip:

Michael Flynn chosen as Trump’s national security adviser. In other news, just start waterboarding yourself to cut out the middle man.

Though he was ousted by the Obama administration in 2014, “ironically,” Scahill noted, “it was Flynn whose black ops programs laid the groundwork for President Obama’s ‘counterterrorism’ strategy in Yemen, Somalia, Afghanistan and, increasingly, Syria and, once again, Iraq.”

Among his other foreign policy views, Flynn is friendly with Russian President Vladimir Putin, and “portrays Iran as the source of many of America’s national security problems,” according to CNN national security analyst Peter Bergen.

Another point of concern is Flynn’s relationship with the government of Turkish President Recep Tayyip Erdogan, which he has reportedly been paid to lobby on behalf of, raising “ethical concerns” and “cast[ing] doubt on his suitability for public office,” according to David Phillips, director of the Program on Peace-building and Rights at Columbia University’s Institute for the Study of Human Rights.

And keeping in line with some of Trump’s other appointees, namely chief strategist Steve Bannon, Flynn has used his platform to amplify rhetoric of the alt-right movement.

Ultimately, Scahill predicts, “Flynn’s presence in Trump’s corner means that a very sophisticated, accomplished assassin could end up in a position of tremendous authority.”