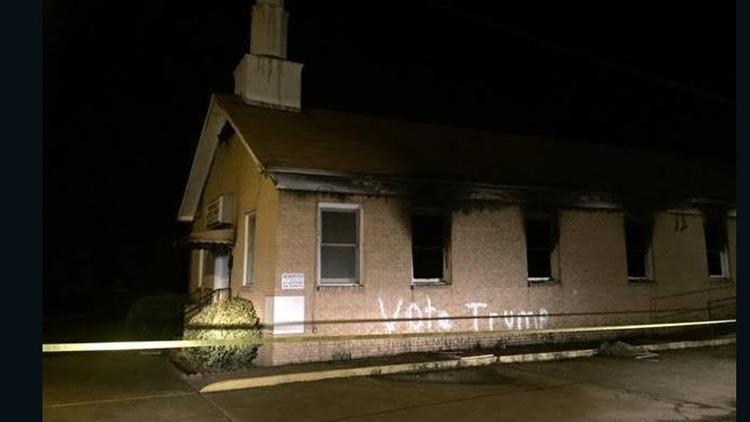 An online fundraising campaign was also set up to help the church rebuild and repair the damages and donations have reached almost $60,000 within hours.

A Black church in Mississippi was burned and spray-painted with “Vote Trump” and authorities said Wednesday they were probing the incident as a hate crime committed one week before the U.S. presidential election.

No one was injured in the Tuesday evening blaze at Hopewell Missionary Baptist Church in Greenville, and the cause of the fire has not been determined, Greenville Fire Chief Ruben Brown Sr. said in a telephone interview. He said the church had been heavily damaged by the fire.

The town of some 33,000 people is about 100 miles northwest of Jackson. “The act that happened left our hearts broken,” Pastor Carolyn Hudson told the news conference, noting that the church has an 111-year history.

“We’re investigating this as a hate crime,” Greenville Police Chief Delando Wilson told a news conference. “We feel that the quote on the church is intimidating.

“It tries to push your beliefs on someone else, and this is a predominantly black church and no one has a right to try to influence the way someone votes in this election.”

Black churches in the U.S. South have long been a base of organizing against racial injustices. During the U.S. civil rights movement of the 1950s and 1960s, southern Black churches were often targets for arson and bombings by white supremacists.

“The FBI Jackson Division is aware of the situation in Greenville, and we are working with our local, state and federal law enforcement partners to determine if any civil rights crimes were committed,” the agency said in a statement.

Meanwhile, a GoFundMe campaign was launched Wednesday morning to help the historic church repair the damage that was done to the building. The goal was set for US$10,000 but within 7 hours, more than US$56,000 was raised.

“The animus of this election cycle combined with the potent racial history of burning black churches as a political symbol makes this event something we must not ignore,” the GoFundMe page read.

Attacks against Black institutions in the country come amid a heated presidential election season in which Republican nominee Donald Trump has used racist and Islamophobic rhetoric that has gained him the support of many high-profile neo-Nazis and white supremacists.

The news also comes amid a heated national debate over racial injustice and biased police killings of Black people which has ignited protests and unrest in several cities over the past few years.