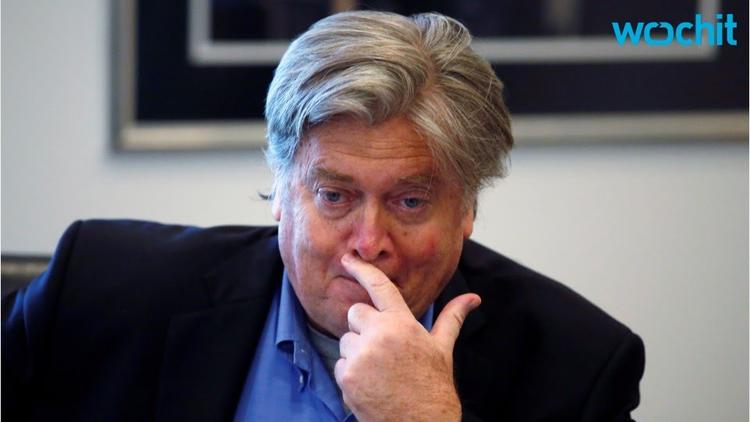 Donald Trump named Neofascist Stephen Bannon as his White House strategist, a co-equal with incoming White House chief of staff and former RNC head Reince Priebus. Bannon has espoused large numbers of crackpot conspiracy theories and has talked about how good anger is in the effort to “take back our country” (i.e. to assert white supremacy). He has alleged that Hillary Clinton was entangled in a conspiracy with the Muslim Brotherhood, which in turn he appears to think is plotting to pollute the purity of his precious bodily fluids.

Here are some scary quotes by or about Bannon:

BETSY WOODRUFF, The Daily Beast: “Our reporting has shown that Peter Brimelow, who is one of the most influential leaders in the white supremacist movement, he told my colleague Gideon Resnick that he actually met with Bannon last month and those two men complimented each other on their work. Brimelow also he also said that he sees Breitbart as a competitor. He sees his project, running a white supremacist website, as competing with Breitbart for kind of the same marketshare.”

One of the propaganda talking points for defenders of Bannon and of Neofascism generally is that he doesn’t agree with everything that appears in the the web magazine he runs, Breitbart.com, a translation into English from the original German of the Völkischer Beobachter . For instance, there was the article that called conservative William Kristol a “renegade Jew.” But Bannon told Lou Dobbs in 2012 that he was enthusiastic about the content of his magazine:

Joining us now executive chairman of Breitbart News Steve Bannon. It’s good to have you with us Steve.

STEVE BANNON, EXECUTIVE CHAIRMAN, BREITBART NEWS: Thanks for having me back, Lou.

DOBBS: First of all how is Breitbart.com and all your sites — how are they doing?

BANNON: I think they are doing excellent. We’ve launched a new site right before Andrew passed away that with — you know the technology and new content I think one fire up almost 10 million unique and close to 80,000 page views per month. So we put a hundred new pieces of content up every day and the team at Breitbart and Joe Pollack and (inaudible) these guys are on fire.

So Bannon didn’t reluctantly publish the most often false and heavily neo-fascist articles to which objections are now being raised. He said the people commissioning and writing this tripe were “on fire.” He approved of the hatred of minorities and the lunatic conspiracy theories appearing there. Of course he did. He was the executive chairman.

In the same interview, Bannon revealed that he has some sort of odd conspiracy theory about the Fed and low (white) birthrates: “BANNON: Lou look at — the birth rate in 2011 is the lowest birth rate the country has had in recorded history. Corporations are sitting almost on a $1 trillion of cash and they’re not reinvesting in America. The signals are out there by people’s decision that they don’t have faith in the political class. And particularly people like Chairman Bernanke to right this economy.”

The US is growing population-wise because it brings in 1 million immigrants each year. It is only the native-born (“white”) birth rate that is basically at replacement rates. Bannon is only interested in one segment of this demography. That campaign ad that Trump brought out just before the election attacking prominent Jewish figures at the Federal Reserve almost certainly was the work of Bannon and his clique.

“STEPHEN BANNON, DIRECTOR, “OCCUPY UNMASKED”: Code Pink, Medea Benjamin, Jodie Evans — the Code Pink crowd — Lisa Fithian, the Anarchist, SCIU, this is a witches brew of groups. This is not college kids and hippies. This is very serious players they are looking to destroy the American government and destroy the American capital system. And they are very upfront about their goals and objectives.

And we — we’ve unmasked here in combination with Anonymous, a very dark sinister group. . .

BANNON: This is the difference, look at how they changed the conversation from deficit and debt in the summer of 2011 to income and equality and the one percent versus — and class warfare. That is a very effective weapon that politicians used.”

I think we know what he meant by calling Code Pink “witches.” And trying to link it to Anonymous? This isn’t political discourse, this is raving.

Then there is this from Mother Jones:

“For nearly a year before Trump hired Bannon to run his campaign, Bannon hosted a daily radio show where many of his guests instigated fear and loathing of Muslims in America. According to research by Mother Jones and the Nation Institute’s Investigative Fund, Bannon conducted dozens of interviews on his SiriusXM show, Breitbart News Daily, with leading anti-Muslim extremists. The collective interviews, steeped in unfounded claims and conspiracy theories, paint a dark and paranoid picture of America’s 3.3 million Muslims and the world’s second-largest faith.

“Bannon often bookended these interviews with full-throated praise for his guests, describing them as “top experts” and urging his listeners to click on their websites and support them. Bannon also occasionally offered his own comments demonizing Muslim Americans, such as when he referred to a moderate Muslim advocacy group as a “front group” and “a bunch of lies,” and when he warned about the threat of “Shariah courts” taking over Texas.”

Even Joe McCarthy would have thought Bannon a bit too suspicious, and Trump has put him into the White House. I suspect he’ll have the authority to have government agencies spy on Americans in contravention of the First and Fourth Amendment. And we could well see Stalinesque show trials of his critics. Some have been looking for evidence that Trump was just kidding when he hit Neofascist high notes, this appointment puts paid to that hope.