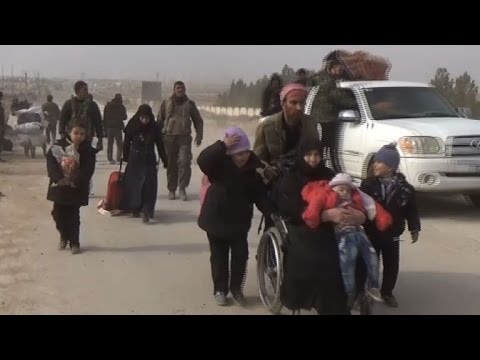 In the past two days, the Syrian Arab Army and its Shiite militia allies (Hizbullah from Lebanon and others from Iraq) has taken a third to forty percent of the Eastern Aleppo pocket. The northeast zone of the pocket has collapsed, with rebel fights apparently declining any longer to stand and fight. They are taking massive fire from Russian and regime aircraft.

On the order of 80,000 out of the 250,000 who lived in the pocket have fled. The press now has to say there are about 170,000 civilians trapped there, since so many appear to have departed– for regime-held West Aleppo and for the Kurdish-held region.

President-Elect Donald J. Trump has made it clear that he favors a victory of the Bashar al-Assad regime in Syria, and is willing to let Russia do the heavily lifting to finish off Muslim radicals such as Daesh (ISIS, ISIL) and the Levantine Conquest Front (Jabhat Fateh al-Sham), the al-Qaeda affiliate formerly known as the Support (Nusra) Front.

Al-Assad did not disguise his glee when Trump was elected.

But Russia and al-Assad are not willing to risk Trump changing his mind, what with all the hawks milling around him and on his new cabinet. For many hard line Republicans like Michael Pompeo (CIA) and Michael Flynn (NSA), Iran is the next war over the horizon, and al-Assad is seen as a strategic asset to Iran.

Maxim Yusin and Georgy Stepanov quote Vladimir Sotnikov, director of the Russia-East-West Strategic Research Center in Kommersant.ru, (trans by BBC Monitoring) that Bashar “Al-Assad, as well as Russia and Iran who are backing him, aim to take the maximum advantage of the two months of ‘doldrums’ in the USA after the presidential election was over, but a new administration has not started its work yet. . .”

Sotnikov says that taking all of Aleppo before Trump’s inauguration makes it less likely that any demand will be made that he step down. Since there at some point will likely be negotiations over Syria, al-Assad will be able to deal from strength.

Another point, which the Russian press doesn’t seem to make, is that the Aleppo pocket was the last big concentration of relatively moderate fundamentalist militias. If the rest of it falls, the fighters will have to try to escape to Idlib, a rural northern province still in the hands of the opposition. Unfortunately for them, the leading group in Idlib is the Levantine Conquest Front, which has al-Qaeda links. So reducing the rebellion to Idlib and al-Qaeda will be a huge propaganda coup for al-Assad.

In other news, the Egyptian government of Abdel Fattah al-Sisi supports the al-Assad regime because of its enmity with the Muslim Brotherhood (most of the rebels that aren’t Salafi Jihadis are MB). Former Mubarak-era cabinet member Ahmad Abou ‘l-Gheit, now Secretary-General of the Arab League, launched an attack on the government of Turkish president Tayyip Erdogan, saying that it was the one who let all those European and other Western radical youth transit to Syria and Iraq.