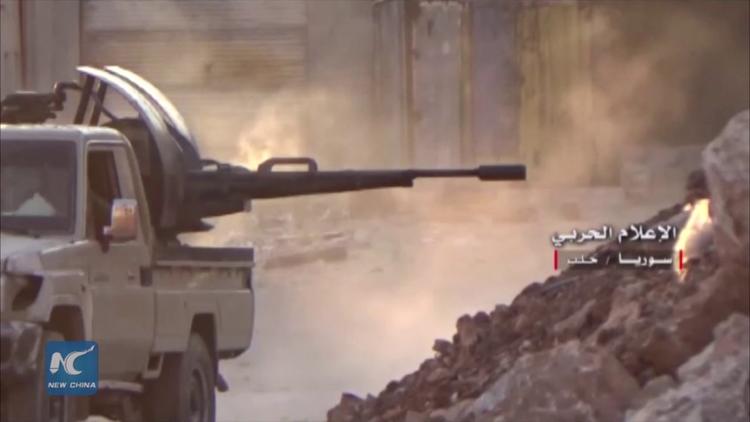 Some 2,000 rebel fighters, most of them Muslim fundamentalists, others remnants of the Free Syrian Army, are trying to break the Syrian regime’s blockade of East Aleppo. But they may soon face cruise missiles launched at them from Russian submarines in the Mediterranean, along with other air strikes coming off a Russian aircraft carrier battle group that has reached the Syrian port of Tartous.

Aleppo is divided into two cities. The Western neighborhoods may have as many as 600k to 1 million inhabitants. They are better off than those in the east and are under Syrian government control. From all accounts they are able to live relatively normal lives, though under a one-party state at war. East Aleppo was long more slummy than the west, and as a set of districts with a lot of have-nots it is not surprising that it rebelled in 2011 and then became a rebel stronghold.

But that stronghold is now under a pretty effective siege, which the rebels outside the city have been trying to break.

Gazeta.ru, via BBC Monitoring, confirms that:

“A Russian Navy carrier group headed by the aircraft carrier Admiral Kuznetsov and the heavy nuclear-powered missile cruiser Pyotr Veliky are preparing to conduct a strike in the very near future against insurgents in the province of Aleppo, a source in Russia’s Ministry of Defence confirmed to Gazeta.ru. An attack using Kalibr cruise missiles and carrier aviation will be conducted on insurgents at the approaches to the city, but not against residential areas, the source affirmed.”

The Russians are announcing that they (unlike the regime of Bashar al-Assad) will avoid bombing non-combatants in the midst of the densely packed eastern city.

But Gazeta.ru notes that the Russian surface ships now assembled in the Mediterranean do not have the Kalibr cruse missile in their arsenal. There are reports of 3 Russian, nuclear-powered submarines in the same part of the sea, who do indeed have this capability. Cruise missile strikes is one of the more effective weapons against the militias, according to Russian sources.

The Obama administration has slammed the Russian air help given to the al-Assad regime and its Shiite militia allies fighting rebeles at East Aleppo. But with Obama a lame duck and Trump a buddy of Putin, Russia and Syria may feel they have a free hand to defeat the rebels complete in east Aleppo.

In one of his campaign debates a year ago, Trump said “Aleppo basically has fallen.” It wasn’t true then, about the east of the city; it might be true soon.