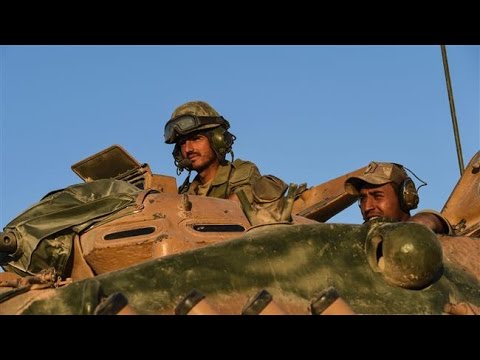 Iraq was alarmed by the announcement by Turkish military authorities that they are sending some 30 armored vehicles and tanks and artillery pieces down to the Turkey-Iraqi border.

There are also hundreds of Turkish troops inside Iraq at Bashiqa near Mosul, who are training Sunni militiamen. Turkey had claimed Mosul in the aftermath of the breakup of the Ottoman Empire but the British wanted it for their new colony of Iraq, and the British prevailed. Turkey is a Sunni-majority country and Iraq is a Shiite-majority country– though that statistic for Iraq only really began to matter politically with the 2005 elections. Turkey feels protective of Mosul Sunni Muslims, who are coming back under the rule of Baghdad.

Iraq demands that the Turkish troops withdraw from the country, terming them “occupation forces.”

Despite al-Abadi’s bluster, in fact Turkey is the country with the big, well-trained and well-equipped NATO army. Iraqi’s army collapsed in 2014 and has only partially been rebuilt; it is moreover bogged down in an epochal fight with Daesh (ISIS, ISIL) which is notorious for its tactical suicide-bombings and booby traps.

At the same news conference, al-Abadi indicated that the shaping operations just outside Mosul have now apparently been completed and the Iraqi army’s Ninth Division or counter-terrorism brigades have now entered the city of Mosul itself. It will, however, be a long slog through back alleys with a constant threat of ninja suicide bombers dropping into the alley or of buildings being booby-trapped with trip wires.

I know that Secretary of State John Kerry is more or less a lame duck, but I can’t understand why he isn’t mediating this Baghdad-Ankara saber-rattling, which can only benefit the Daesh terrorists.