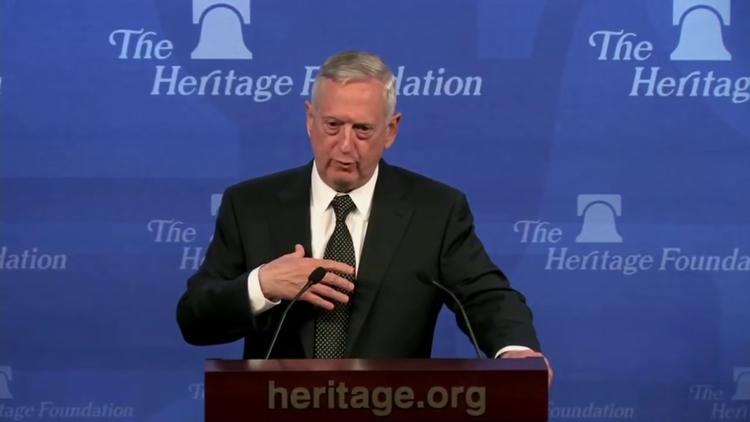 Several members of Donald Trump’s new team, including National Security Adviser Mike Flynn and proposed Secretary of Defense Mike Mattis have expressed themselves troubled about “political Islam” (or in Flynn’s case, just “Islam”). Mattis seems to have confused Daesh’s (ISIS, ISIL) idea of a neo-Caliphate (bringing back a medieval papacy-like institution to Islam) with “political Islam” in general. He wants Americans to ask the question of whether political Islam is good for the US…

Gen. Mattis should grapple a little with whether his 2004 Fallujah campaign did not alienate the Sunni Arabs of Iraq, turn them off to the 2005 elections, and pave the way for them to ally with Daesh/ ISIL in 2014. That is, Mattis may have created the political Islam he now wants to name and ideologically combat.

The American right wing has substituted hysteria about socialism with hysteria about Islam and especially political Islam, equating both with terrorism. And its members appear to imagine that Islam is an ideology like Communism, and can be defeated by the United States just as Communism was (well, except in China, which, let’s face it, is a hell of an exception).

There is hopeless confusion on the American right wing about Islam in general and political Islam in particular. Let me suggest some distinctions:

Muslims are adherents of the religion of Islam. Some 85% of them in opinion polling are not fundamentalists.

Fundamentalist Muslims are those who take a literalist approach to Muslim law, ritual and doctrine and disallow any ambiguity. Fundamentalists can be quietist (uninterested in politics) or political.

Not all Muslims are fundamentalists. Many in e.g. West Africa or South Asia are Sufi mystics who have an allegorical interpretation of the religion. Others are secular-minded. Of the fundamentalists, not all are devotees of political Islam.

Terrorism is the tactic of a non-state actor harming non-combatants to achieve a political goal. Very, very few Muslims engage in terrorism, and very few fundamentalists do so, and very few devotees of political Islam do so. (People of Christian heritage also routinely deploy terrorism).

Arguably, Daesh runs a terrorist state, not a political-Islamic one. The people fighting against Daesh at Mosul include a large contingent of Shiites who believe in political Islam and belong to the major parties in the Iraqi parliament that advocate this ideology, including the Da’wa Party of Prime Minister Haydar al-Abadi and the Islamic Supreme Council of Ammar al-Hakim. If you denounce political Islam across the board, you’d have to denounce the Iraqi government, but Gen. Mattis construes it as a friend.

Regular readers will know that I don’t like the word “Islamism,” which was coined by French academics in reaction against the English-speaking world’s tendency to speak of Muslim fundamentalism. In English, fundamentalism is a perfectly good description of the phenomenon, and it has the advantage that we all recognize that fundamentalism exists in all religions.

Martin Marty’s “Fundamentalistm Project” at the University of Chicago resulted in several volumes that underline this point. Here are some common elements in fundamentalisms across the board as Marty’s project discovered them:

1. Patriarchy: women are to be subservient to their fathers and husbands and if possible to remain at home.
2. The rules of religion are self-evident and must be literally obeyed.
3. Children of believers should be segregated from non-believers (as incoming Secretary of Education Betsy DeVos holds).
4. Fundamentalists hold that their religious laws are binding on all, believer and unbeliever alike (thus, incoming Attorney General Jeff Sessions tried to keep an LGBT meeting from happening on a state college campus; fundamentalism construes public space as belonging to fundamentalist believers).
5. Fundamentalist believers are the in-group. The out-group is rejected.
6. They are nostalgic for an imagined religious golden age of the past that they would like to reinstate.

So here is a question for Gen. Mattis and Gen. Flynn: If political Islam is so bad, why is political Christianity better?

And, then we have to ask, are governments ruled by believers in political Islam really inimical to the US?

The ideology of the ruling government of Morocco, a non-NATO ally of the United States, is political Islam.

The major opposition party in Tunisia, the only successful case of democratization coming out of the Arab Spring, is a party of political Islam.

Adherents of political Islam just won a majority in the Kuwaiti parliament. Kuwait is a key ally of the US which provides basing to the US military.

The major Shiite parties forming the government in Baghdad, Iraq, are all devotees of political Islam. The Baghdad government is a key ally of the US in taking down Daesh/ ISIL.

While the Muslim League, the ruling party in that fantastic Pakistan over which Trump gushed in his phone call to Prime Minister Nawaz Sharif, is not a fundamentalist party despite its name, many of its backbenchers do believe in aspects of political Islam. I.e., they believe in using the state to assert what they consider to be Islamic law. Pakistan is waging a long-term and important campaign against the Pakistani Taliban, from which the 10,000 US troops in Afghanistan benefit.

The US has been actively backing 30 Syrian rebel groups for years. Almost all of them have as their ideology political Islam. It is the regime of Bashar al-Assad, backed by the Baath Party, that is secular.

So Gen. Mattis apparently does not mean by “political Islam” what social scientists or people in the Middle East mean by it. Governments of political Islam, aside from Iran and a few others, appear to have perfectly good relations with the US.

On the other hand, secular governments like that of Syria, Algeria, and Uzbekistan have often had frosty relationships with the US.

In any case, neither Islam nor political Islam in any way resembles Communism. Islam is the religion of 1.6 billion people, over a fifth of humankind. Because of high birthrates in Muslim countries, moreover, the proportion of the world that is Muslim will probably go to 1/3.

If the United States, which is 5% of the world by population, tries to go against a third of humankind, it will lose. But the fact is that the US has no beef with most forms of Islam or even political Islam. And aggressive attempts to dictate to Muslims what they may believe will backfire, just as the whole Iraq War backfired.

The US can defeat individual terrorist organizations that appeal to Muslim themes. Counter-terrorism tactics can work. But it will need Muslim help, including the help of devotees of political Islam. If Daesh goes down in Iraq, it will have been defeated in large part by an alternative form of political Islam, to which the US gave air support. If what the Trump cabinet wants to say is only that the US plans to promote kinds of Islam that support the US and to fight those that stand in the way of the interests of the American Empire, well, the French and British empires used to plot out those schemes, too. Those empires aren’t around any more, but there are plenty of governments rooted in political Islam.