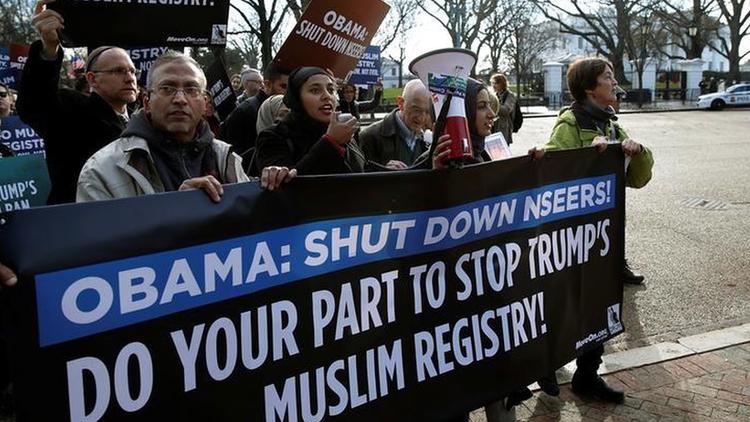 Activists say Thursday’s announcement of the dismantling of the notorious NSEERS program is a key victory in the fight against Trump’s Islamophobia.

After 14 years of almost constant organizing, activists celebrated Thursday the announcement that the Obama administration would fully dismantle a dormant “special registration” program that targeted migrants from Muslim majority countries in the wake of the U.S. 9/11 attacks.

While the National Security Entry-Exit Registration System, NSEERS, was suspended in 2011, calls for Obama to fully dismantle the program have grown since the election of Donald Trump, whose explicitly Islamophobic campaign promised to ban Muslim migrants from entering the country and explicitly considered reviving internment camp program for Muslims, similar to those used during WW2 against Japanese-Americans.

Many credit Obama’s decision to the work of New York City-based grassroots organization Desis Rising Up and Moving, DRUM, who since the creation of the program in 2002 by President George W. Bush, have organized resistance to the program which led to the deportation of more than 13, 000 men, the registration of almost 85, 000 others, and spread panic throughout migrant communities across the U.S.

Much love to @DesisRisingUp for helping lead the push to dismantle NSEERS. ✊?❤️???

“At DRUM, we saw firsthand how thousands of families have been torn apart, jobs lost, and neighborhoods and communities devastated, many of which have still yet to recover. This massive and ineffective profiling campaign based on religion and ethnicity led to zero identifications and convictions of anyone associated with any cases of terrorism, but has come at extensive social, ethical, and economic costs,” wrote DRUM executive director Fahd Ahmed, in a press release upon the program’s suspension in 2011.

DRUM and many others declared Obama’s announcement- coming after demonstrations organized in New York and Washington in December as well as an online petition that reaced almost 150,000 signatures in the month after Trump’s election- a strategic victory, saying that the full dismantling of the program’s regulatory framework will make it much more difficult for Trump to enact his campaign promises, and thus make building resistance to them easier.

However, DRUM also suggested that the fight against Trump’s Islamophobic policies continues. “Just because a future program may not mention Muslims specifically, just as NSEERS did not, does not mean that Muslim communities are not at risk,” wrote Ahmed.

On Wednesday key Trump advisor Kellyanne Conway said that the President-elect would not create a ban “based solely on religion.”

Trump has stacked his cabinet and key advisor positions with well-known Islamophobes, from Conway, who worked with hysterical anti-Muslim conspiracy theorist Frank Gaffney, to Homeland Security pick Kris Koback, who helped draft the original NSEERS program as well as anti-Latinx racial profiling and deportation laws in Arizona and Alabama.

On Wednesday when Trump was asked if he was still committed to his anti-Muslim campaign promises he said, “you know my plans.”