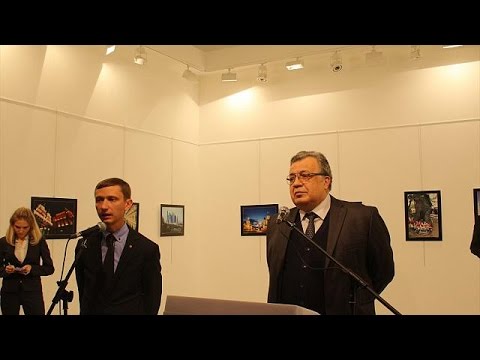 It is not entirely clear why Mevlut Altintas, a young policeman in, ironically, a counter-terrorism unit in the Turkish capital of Ankara, shot Andrei Karlov– the Russian ambassador to Turkey– in the back on Monday. Was he a lone wolf? Part of a far-right Muslim vigilante movement?

The Washington Post noted in its headline that Altintas invoked the suffering of the people of the East Aleppo pocket and of Syria in general when he carried out the murder. He also used an Arabic phrase (Turks don’t speak Arabic and most don’t know very much of that language) going back to the companions of the Prophet Muhammad when they were besieged by polytheist persecutors from Mecca, pledging steadfastness. This phrase is especially popular among the Nusra Front (al-Qaeda) fighters in Syria.

So it is likely that Altintas, who had served last winter in Turkish President Tayyip Erdogan’s own security detail, became radicalized at some point, likely by the Syrian-Iranian-Russian siege of East Aleppo, which the right wing Muslim Turkish press has been depicting as a massacre of innocents. (It was a massacre of innocents, but it was also a battle in a civil war between the Syrian Arab Army & allies and Salafi Jihadi fighters determined to overthrow the government).

As Mehdi R. Hasan pointed out (H/T @ggreenwald), the willingness of the Western press to see Altintas’s act of brutal murder as having a motive differs markedly from how such attacks are reported in the United States itself. Understanding motive is not to excuse or forgive, but is an essential act of analysis for the purposes of public policy and even just basic police work. There is never any excuse for striking at non-combatants, which is always cowardly. That said, why did Altintas do it?

The terrorism generated by George W. Bush’s invasion and occupation of Iraq (Madrid, London, Glasgow e.g.) was not typically talked about that way by American politicians or journalists. We were told that the terrorists attacked the US because they hated our freedoms and way of life. Terrorism was raised from the level of a crime to that of metaphysics, as a wholly different realm of activity and law, which, unlike other purposeful human action, had no specific motive. That the US occupation was at least the proximate cause of some 4 million Iraqis being displaced from their homes, hundreds of thousands killed or wounded, millions of widows and orphans created, etc., etc., was almost never frankly admitted. (Two wrongs don’t make a right, but the US Air Force in Iraq bombarded civilian neighborhoods to get at guerrilla fighters just the way Russia is doing in East Aleppo. I remember one long day in the middle of the Iraq War when the US repeatedly bombarded Ammara and killed dozens of people, and it wasn’t even mentioned on American tv.)

But that Vladimir Putin’s Grozny-like tactics in Syria might have caused blowback is perfectly apparent to the headline-writers. I guess it is only in the case of other countries’ imperialism that blowback can be recognized.

The fake news industry in Turkey is blaming the assassination on the American Central Intelligence Agency and on the Turkish political and religious cult, the Gulen movement. I think it is unlikely either was involved.

At this very early moment after the attack, my guess is that Altintas was taking revenge on Karlov for the defeat of the Nusra Front in East Aleppo (About a fourth of the fighters there were al-Qaeda-affiliated). The Turkish government has been accused of supporting the Nusra Front or at least its close allies.

But as of about July 15, the date of the failed coup attempt, Turkey’s policy radically changed. Turkish President Erdogan appears to have decided that his main challenges were domestic and that little could be gained, under conditions of political instability at home, from further intervention in Syria. Erdogan believes that Kurdish separatism and Gulen cultism are his two biggest enemies. The US has annoyed him by supporting the leftist YPG Kurds of northeast Syria, which Erdogan sees a nothing more than PKK terrorist separatists. There is only circumstantial evidence, but it appears that Russia promised to withhold support from the YPG if Erdogan would let them and the al-Assad regime have East Aleppo.

So Erdogan created the perfect circumstances for blowback, the intelligence term of art for a covert operation that comes back around to bite you in the ass.

Altintas and other Turkish police were told in private that their government supports the guerrillas in Syria on grounds of Muslim fellow-feeling. But then the Turkish government hung the guerrillas out to dry and let Russia have its way with them. Hence, some Turkish security personnel could not accept this about-face, and needed to take revenge on a Russian official.

The assassination will slow but not interrupt that process of Russo-Turkish rapprochement, after a period last winter and spring when the two countries were boycotting each other. If anything this assassination will be blamed on enemies both of Moscow and of Ankara, and may well cause the Erdogan-Putin relationship to strengthen.

If so, it will be a typical use of terrorism by high state elites– ignoring the terrorists but seeing if you could use the tensions for governmental policy-making.