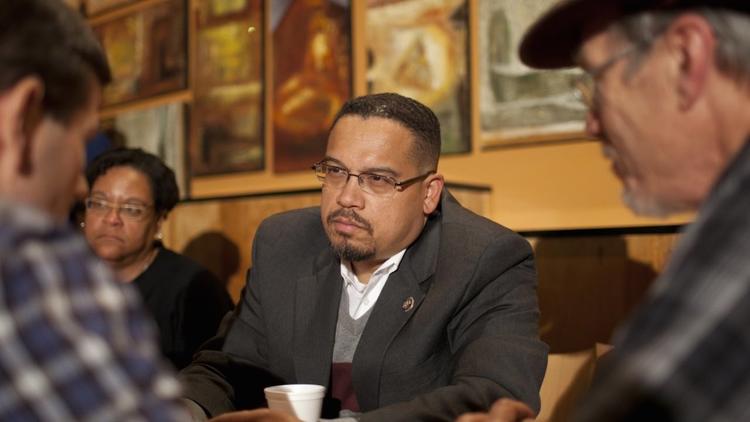 I am a fan of Garrison Keillor, of “Prairie Home Companion” fame. I am also a fan of Keith Ellison (D-MN), the prominent liberal representative from Minneapolis and happens to be a Muslim.

Unfortunately for me, I have to choose between them because Keillor, deep in depression over the advent of the Trump Gilded Age, blasted the idea of Ellison becoming the Democratic National Committee chair. Keillor doesn’t think all the children of Lake Wobegone are above average. He thinks Ellison is a “lackluster black Muslim” who would have difficulty connecting with the white factory workers of Youngstown, the kind of people the Democrats need if they are to win in 2020.

Keillor is quick-witted and generally insightful, but why he chose to be so wrong, and wrongheaded, on this issue is probably a mystery that would stump even the great sleuth Guy Noir.

So here’s a counter-proposition for Mr. Keillor to consider. If the Democratic Party had been less dynastic and had run Keith Ellison as its presidential candidate in 2016, Ellison would have beaten Trump. And, moreover, if the Democrats were smart they would try to convince Ellison to run in 2020.

In order to understand why I say this, you have to understand why Hillary Clinton lost the election. It was because in some key states like Minnesota, Wisconsin and Michigan, she suffered from a lack of enthusiasm on the part of Democrats. In those states, it is true that perhaps 14% of the white working class defected to Trump. But another 21% just stayed home. As Konstantin Kilibarda and Daria Roithmayr argue at Slate, the idea that Trump flipped the white working class is incorrect. It was Sec. Clinton’s inability to get them to come to the voting booth for her that was decisive.

Moreover, Clinton lost the African-American vote in two ways. First, she couldn’t inspire as many of them to vote as did Obama. They were only 12% of the electorate in 2016, down from 13% in 2012. Second, she couldn’t get as many of those who voted to vote for her. Only 88% did so, about the same level as Kerry attracted in 2004 but way off Obama’s percentages (93%). She performed especially poorly with younger African-Americans and with well-educated ones. And she was way off among African-Americans in Florida, at only 84%.

Sec. Clinton also suffered an enthusiasm gap among Latino and Asian voters compared to Obama. In 2012, Obama won 71% of the Latino vote. She got only 65% of Latinos to cast their ballot for her. She performed poorly among youth across he board, compared to Obama. She did not do as well as Obama in 2008, and while her popular vote totals are near his for 2012, her support was distributed differently (it doesn’t do her any good to have extra millions vote for her in California and New York but for Michigander Dems to stay home).

In short, Clinton lost in key states because she could not put back together the Obama coalition.

Ellison is substantially to Clinton’s left and those factory workers in Youngstown know that he is their champion. The AFL-CIO is jumping up and down over the moon with enthusiasm for him. He has been at the forefront of the struggle for the right to unionize, the right to strike and the right to be paid a living wage. Maybe you think the white working class is racist. It may be in the deep South and the West, but most of those states weren’t decisive in the presidential contest. It isn’t in the Northeast and the Midwest, where its votes matter:

“In Democracy Corps’ combined interviews for 2012, Obama won white non-college voters in New England by 51 to 42 percent, tied Romney in the West North Central states by 47 to 46 percent and trailed by only 7 points in the Mid-Atlantic by 44 to 51 percent.”

Ellison, being to Obama’s left on workers’ issues, has the potential to do even better than Obama among white workers in the Midwestern states that Trump narrowly won, and he certainly has the potential to get them out to vote in much larger numbers than Sec. Clinton did.

There is one person on the political horizon who could put back together Obama’s winning coalition. It is Keith Ellison. You couldn’t imagine Hillary Clinton winning North Carolina. Ellison at least certainly could, putting together the liberal whites of the Research Triangle Park with an enthusiastic African-American vote. Ellison could handily win Michigan and of course Minnesota and Wisconsin. The blue firewall did not hold for Clinton but it would, for Ellison.

If we can cede to Ellison the youth vote, the working class vote, the African-American vote, the liberal white suburban vote (which he wins in his home district), and the Latino vote, it is hard to see where we could go wrong with him.

There is that Muslim thing, of course. And billionaire arch-Zionist Haim Saban called Ellison an anti-Semite because he cares about rights for Palestinians.

In fact, Ellison has been pro-Israel, despite attempts to smear him by phonying up interview clips (the Trump fake news division). In fact, he is to the right of the Democratic Party on most issues having to do with Israel. As Bernie Sanders showed, it is possible to care about basic human rights for Palestinians while at the same time supporting basic human rights for Israelis. It cannot be assumed that Ellison would do worse nationally with Jews, especially those under 60, than Obama. But it also has to be noted that Jews are an ever-shrinking proportion of the electorate and that crowd-funding has made fanatics like Saban increasingly irrelevant. Trump took plenty of risks with the Jewish vote, down to playing to Neonazis, which is not something you could at all say about Ellison!

As for being Muslim, it could hurt him in some quarters. But likely those are the same quarters where it would hurt him to be Black. I doubt African-Americans, Latinos or Asian-Americans would care very much. As for white suburbanites, ever since Trump and the GOP far right began attacking Muslims, the view of Islam among independents and Democrats has improved markedly in just a year, according to Shibley Telhami’s polling:

“From November 2015 to June 2016, Americans views on Muslims have gone from 53% favorable to 62% favorable , while Americans with favorable views o f Islam have increased from 37% to 44% in June over the same period. During that same time frame, the percentage of people who think that Islamic and Western religious and social traditions are compatible increased from 57% % to 64 %.”

Given that Trump is filling his administration with crazed Islamophobes, this trend could well continue and accelerate, making a Muslim like Ellison not only reputable but even beloved as an underdog. Besides, if Americans will vote for a pussy-grabbing narcissistic erratic white nationalist with a bad comb-over, it is hard to rule them out voting for almost anyone at all.

The Young Turks from last week: “Anatomy Of A Political Hit Job (Brought To You By The Establishment)”