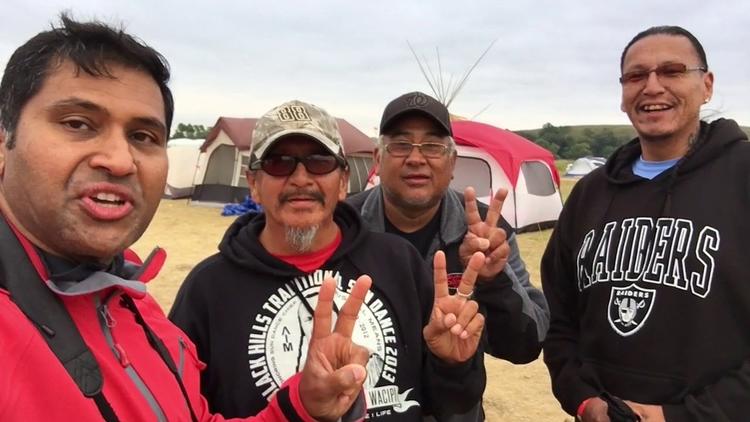 We’ve been pitted against each other for too long. Now is the time to come together to fix our corrupt political systems.

The heroic work of the Standing Rock water protectors represents a defining moment in the long struggle against the institutions of empire and colonial rule. It is fitting that the leaders are indigenous peoples who have come together in an ever-widening circle.

As the Standing Rock circle has expanded, it has included nonindigenous participants who reflect the diverse racial, religious, gender, and ethnic identities of peoples the world over. They come from the colonized and colonizers alike, standing in solidarity with the indigenous water protectors.

In early December, the outer circle grew to include hundreds of U.S. military veterans, among them Wesley Clark Jr., son of a celebrated general. Clark and his brothers in arms engaged in a historic act. They knelt before the Lakota elders to ask forgiveness for the terrible atrocities committed against the Lakota peoples, lands, and waters by the U.S. military.

Standing Rock is the story of coming together. It stands in stark contrast to another story unfolding in our national media: the choices the president-elect is making to fill the top positions in his administration. In his election campaign, he appealed to his White predominantly male working-class base with promises to drain the swamp of Washington lobbyists. He is now drawing his leaders from the lobbyists and champions of the Wall Street system he ran against.

The peaceful coming together at Standing Rock and the actions of the forthcoming Trump administration are expressions of two divergent paths to our common future. One is a path of inclusion seeking a future that works for the whole of life. The other is a path of exclusion aimed at securing the fortunes of the few through the sacrifice of the many.

Standing Rock is the story of coming together.

For 5,000 years, imperial institutions have maintained their power by pitting the victims of empire against one another based on differences in skin color, class, language, religion, income, gender, and age. The president-elect has drawn on this age-old strategy, directing the justified anger of the White male working class away from its true cause and toward people different from themselves who have done nothing to deserve that anger.

For a brief period after WWII, the benefits of economic growth were spread widely among workers—particularly White working-class men. Most had secure family-wage jobs. Many owned their homes. They could afford to send their children to college and expected their children to have lives even better than their own. We called it the American Dream.

Then the leaders of the Wall Street system used their financial and political power to wipe away the policies that sustained the dream of the favored majority. They enriched themselves through outsourcing, automation, financial manipulation, and tax evasion. As the middle class shrank, Wall Street used its control of media and education to shift the blame from itself to the governments whose policies it largely controlled.

Trump played to the anger of those the system had privileged and then betrayed.

Trump played to the anger of those the system had privileged and then betrayed, and directed it against those blamed for displacement—people of color and immigrants, groups Clinton made a special effort to reach.

Trump’s base of the once privileged and Clinton’s base of the never privileged all have good reason for outrage. They all are victims of a system that favors the enrichment of a few hundred people and reduces the rest to competing for crumbs that fall from the gilded table. It is unjust, unsustainable, and contrary to the wisdom teachings of the world’s religions. It threatens the future well-being of every person—rich or poor, regardless of race, gender, or other identifiers.

We have a system that should not be. And it need not be. Our job is to overcome the divisions that imperial rulers have cultivated and exploited for millennia. It is time to learn from the coming together at Standing Rock and to transcend our divisions. We can use the power of We the People to replace the Wall Street system with one that provides every living person with the opportunity for a healthy and meaningful life. Together we can make it so.

David Korten wrote this article for YES! Magazine as part of his column on “A Living Earth Economy.” David is co-founder and board chair of YES! Magazine, president of the Living Economies Forum, co-chair of the New Economy Working Group, a member of the Club of Rome, and the author of influential books, including When Corporations Rule the World and Change the Story, Change the Future: A Living Economy for a Living Earth. His work builds on lessons from the 21 years he and his wife, Fran, lived and worked in Africa, Asia, and Latin America on a quest to end global poverty. Follow him on Twitter @dkorten and Facebook.